Scorching heat halted outdoor matches and sent fans scurrying for shade at the Australian Open on Tuesday before resuming late in the afternoon as players were given an early test of their endurance on a sweltering day two at Melbourne Park.

Organisers invoked their Extreme Heat Policy about three hours into the day session as temperatures nudged 36 degrees Celsius (97F) and searing gusts of wind blew through the venue.

The tournament’s Heat Stress Scale, which measures radiant heat, humidity and air temperature in the shade, crossed its highest threshold of 5.0, halting 10 outdoor matches at the Grand Slam. Play continued under the roofs of the main showcourts, however, with former world number one Andy Murray sweating it out against Italian Matteo Berrettini at Rod Laver Arena.

Frenchwoman Caroline Garcia, who beat Katherine Sebov 6-3, 6-0 on the main showcourt before Murray’s match, said she was not too badly affected earlier.

“I have to admit on Rod Laver Arena it was pretty nice. Obviously it was warm. It was nice to be able to walk in the shadow a little bit when you were able to serve but I didn’t feel that (it was) such warm weather,” Garcia said. 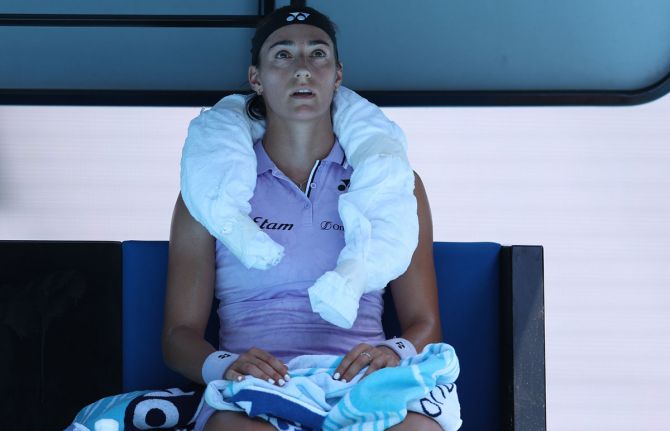 Play on the outdoor courts resumed at around 5 p.m. local time (0600 GMT) when conditions improved.

The suspension of play was not welcomed by all players, with local man Jordan Thompson blowing his cool when his match on Court Three was halted when trailing American J.J. Wolf 6-3 1-3.

“When does that ever happen?” world number 88 Thompson barked at the chair umpire.

The temperature was already nudging 30 degrees Celsius when matches started in the morning, and Canada’s Leylah Fernandez was glad to see off French veteran Alize Cornet in straight sets in the first match on Court 3.

“I think I did well to manage my emotions, and then especially manage the heat, try not to get too hot-headed,” Fernandez told reporters.

“So I was very happy with that.” Extreme heat is a feature of the Australian Open, held in mid-summer in the country, with play occasionally suspended and leaving organisers with scheduling headaches.

Tennis Australia tweaked its extreme heat policy at the end of 2018 after a slew of players complained of health and safety risks under the previous system.

Novak Djokovic begins his charge towards a record-extending 10th Australian Open title in cooler conditions in the evening when he meets Roberto Carballes Baena.

A more pleasant day is expected on Wednesday, with the temperature set to drop by more than 10 degrees.

‘We sat down and worked on it,’ Jason Gillespie reveals strategy that kept Dravid and Tendulkar quiet during 2004 series

As we celebrate Team India’s splendid run, we must remember the vital role played by the NCA