‘We love this team’

Hundreds of thousands of Argentines poured into the sunlit streets of Buenos Aires on Sunday, ecstatic after a nail-biting victory on penalties in the World Cup final over France made the South Americans world champions for the first time since 1986.

In a tense and roller-coaster match played in Qatar in front of some 88,000 fans, Argentina, led by star Lionel Messi, took home its third World Cup after beating France, the defending champions, 4-2 on penalties after drawing 3-3 after extra time. “I can’t believe it! It was difficult, but we did it, thanks to Messi,” said Santiago, 13, celebrating the victory with his family in front of the Buenos Aires house that had belonged to late soccer icon Diego Maradona, who led the team in 1986.

Bearing flags, hats and the country’s iconic blue-and-white jerseys, Argentines took over Buenos Aires’ downtown and other iconic spots within minutes after the win. Across the country, other celebrations broke out. 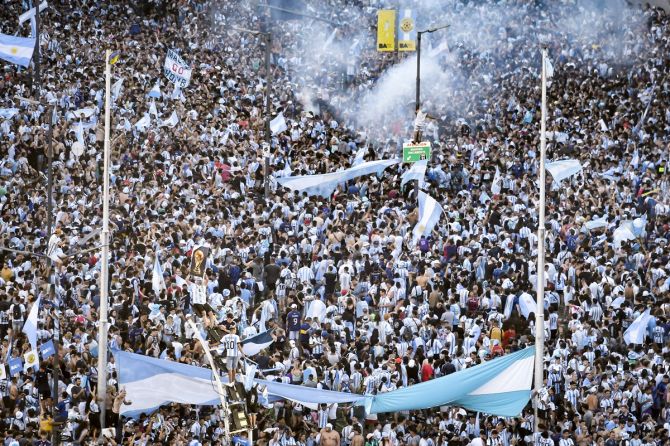 “It was an incredible game, at times anguishing,” said 46-year-old Diego Aburgeily, who cheered on the national side from the suburbs of Buenos Aires. “This team made people fall in love with them for the first time in decades.”

The South American team, which lost the final of the tournament against Germany in 2014, had not won a World Cup since 1986. But the rise of the team has spurred avid support in Argentina, which is plagued by high inflation and an economic crisis that has pushed some 40% of the population into poverty. 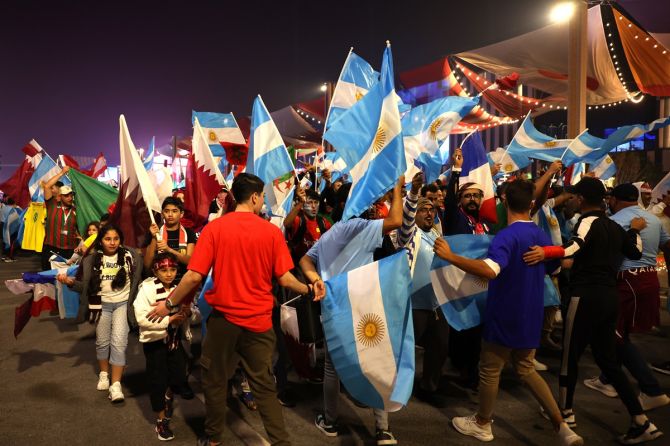 “We could have won it comfortably, but we were forced to suffer, like always,” said Rogelio Vazquez, an Argentine fan. “But the suffering makes the win all the more enjoyable.”

Nerves were running high as the two teams took to penalty kicks after extra time. Messi easily scored for Argentina, followed by a goal from France’s Kylian Mbappe. Two more goals from Argentina and two unsuccessful shots from France meant the next goal would finish the game.

Some Argentines hung their heads, others prayed.

The final penalty kick from Argentina’s Gonzalo Montiel caused the ball to sail neatly into the net. 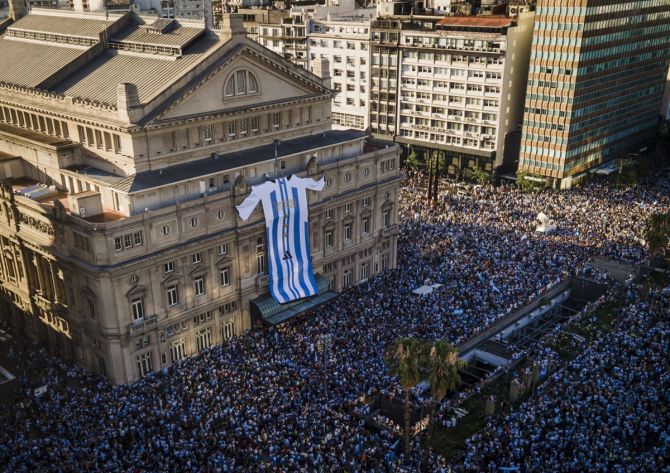 Shouting, jumping and spraying their drinks into the air, incredulous Argentines erupted in cheers as the team clinched the win. Some, hugging friends and family, were even brought to tears.

“Dibu (Martinez), Messi, the whole team, I love them,” said Jonathan Heredia, his voice hoarse from cheering. “I feel like they made me cry, I wanted this more than anything.” Huge crowds surrounded the Obelisco monument in the center of Buenos Aires, like they had done after the semi-final win over Croatia. Other fans leaned out the side of cars waving flags and jerseys as they rode through the streets.

“It is an immense joy after so much tension,” Nicolas Piry, a 46-year-old lawyer, told Reuters.

“The harmony between the team, headed by a leader who plays at a level making him the best in the world, and the players’ condition in general led us to this well-deserved success. Let’s go Argentina!” he added.

Messi, 35, scored in the first half and then again in extra time, while Angel Di Maria scored the other for Argentina. Mbappe, 23, scored all three French goals before the shootout.

The final win cements Messi’s status as a legend among Argentines, with Sunday’s match expected to be his last appearance in a World Cup for his country.

Jr NTR with Rajamouli in Bulgaria

Swara Bhasker says Kangana Ranaut should seek justice for Sushant Singh Rajput, not make it about her ‘personal vendetta’