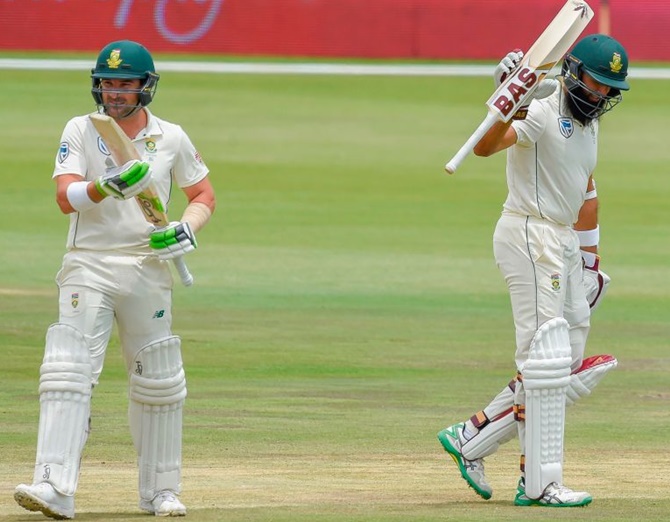 Hashim Amla struck an unbeaten half-century as South Africa brushed aside some early alarms to record a six wicket victory over Pakistan on day three of the first Test at Centurion Park on Friday.

Chasing a modest 149 to win in testing batting conditions, Amla took his side home shortly before tea on 63 not out to rediscover his form with just a second half-century in his last 14 innings.

He put on 119 for the second wicket with the gritty opener Dean Elgar (50) to lay the platform for the win, though both survived early scares as Pakistan’s seamers created immense pressure on a wicket that showed both sideways movement and variable bounce.

The second Test begins in Cape Town on Jan. 3 with the series to conclude in Johannesburg on Jan. 11.

Starting their second innings chase under gloomy skies after overnight rain, South Africa opener Aiden Markram was trapped leg before wicket by Hasan Ali (1-39) for a duck before the home side had a run on the board.

Pakistan bowled with skill and accuracy, and beat the bat on numerous occasions before Amla was dropped on eight at third slip by Fakhar Zaman.

Pakistan’s irritation grew when moments later they thought they had Elgar caught at first slip when he was on four.

Seamer Shaheen Afridi (1-53) induced the edge that looked to have been gobbled up by Azhar Ali. Elgar began walking towards the dressing room, but was called back when the on-field umpires conferred over whether the catch had been taken.

It was sent to third umpire Wilson with a soft signal of ‘out’, which called for conclusive evidence for the decision to be overturned.

With only the two-dimensional images available, the West Indian decided there was enough doubt to change the decision.

It was a potentially a game-changing moment in the innings with South Africa on 16-1 at the time.

Elgar and Amla capitalised on that good fortune and both would go on to make half-centuries.

Elgar (50) then handed a first test wicket to Pakistan part-timer Shan Masood when he had a swipe at a loose delivery and was caught by wicketkeeper Sarfraz Ahmed.

Theunis de Bruyn (10) was stumped off Yasir Shah (1-20) trying to finish the game with quick runs and home captain Faf du Plessis recorded a pair of ducks in the match when he attempted a hook off Afridi and was caught at fine leg.

Star Performer: Shikhar, the one!

Gloves to be given to all voters at polling booths