For now, as social media users make Mesmeraki’s illustration go viral, it’s worth noting that for all its imperial past, the Crown's stories are no different from its former empire’s. All it took was one sly move in a mash-up 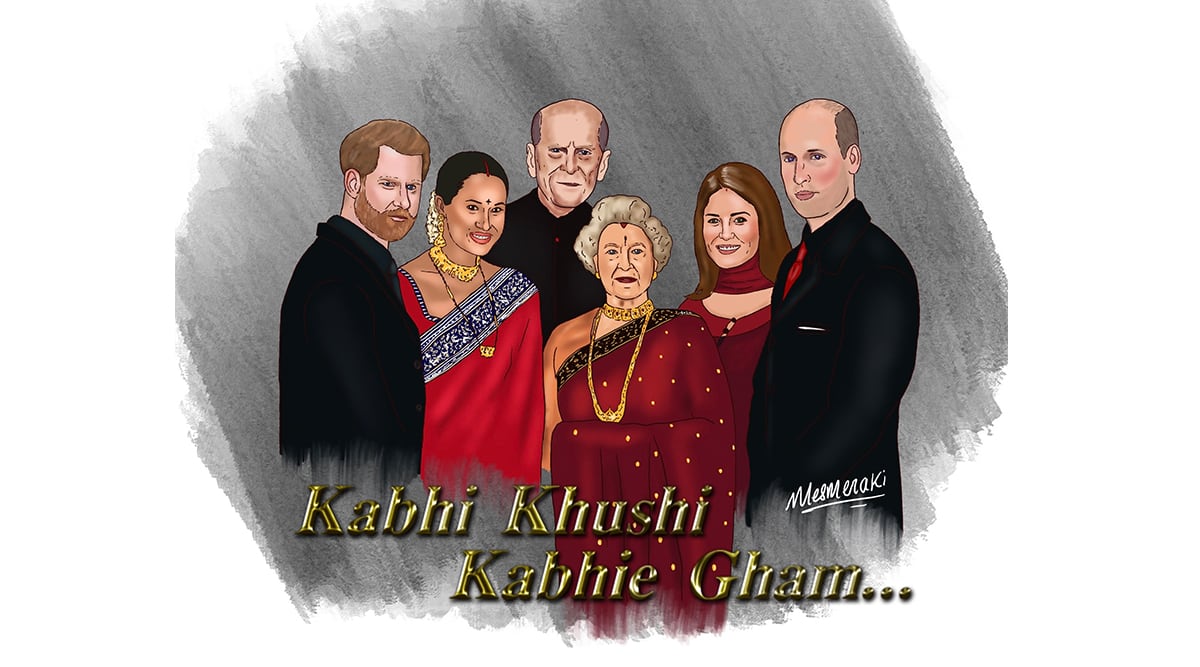 For everyone who wanted to know, “Who made this?” as they shared the mash-up of Karan Johar’s 2001 film Kabhi Khushi Kabhie Gham and the British royals, the answer is: Mesmeraki. The illustration, which has been widely shared across social media, is a desi take on the ‘Megxit’ rift in the royal family. The Windsors’ dynastic feuds possibly pale in comparison to the khandani drama once seen among Delhi’s Raichands — something that Mesmeraki picked up early on, almost like an inside joke.

“What prompted me to make this illustration and its purpose was to kind of take this Big Western Issue which is affecting a lot of western media and make it into something we have all seen in our Asian homes. It makes it more understandable and relatable,” says Birmingham-based artist and illustrator Sanjeet Singh Bhachu, 23, who goes by the moniker, Mesmeraki.

Bhachu first made the illustration in January 2020, when Meghan Markle and Prince Harry announced that they were stepping back from the royal family — an event referred to as ‘Megxit’. The artist slapped the royals’ faces on the poster of the Karan Johar film. Diaspora aunties in the UK couldn’t stop chuckling over it. When they would spam Bhachu with Whatsapp forwards of the illustration, he’d have to reply, “Yes Aunty, I made that.” Now, in the wake of the tell-all interview with Oprah, the illustration is making the rounds again. “Kabhi Khushi Kabhie Gham is one of those things that almost every Indian person knows about and has probably memorised word for word, because I know I have,” Bhachu says.

The Queen morphed into Nandini and Prince William is Rohan, but the parallels go beyond these superimposed positions. Bhachu has taken the royal family and made it familiarly Asian. Indians can’t be too surprised by plotlines of couples who marry for love and are estranged from families, and, very often, the reasons come down to class, caste and khandan, much like ‘The Institution’ that Meghan refers to.

Bhachu was born in the UK to a mother from India and a father from Kenya. As part of the British Asian community, the artist has ties to several countries but has always felt like his heart was in India. “That’s where my Sikhi aspect or my love for Bollywood comes from.”

Bhachu’s art avatar, Mesmeraki, combines “mesmerising” and the Greek “meraki”, to put one’s soul in what one does. Through Mesmeraki, Bhachu says that he wants to speak to a larger audience, and actively researches other communities and religions. Since the ‘Megxit’ illustration, Bhachu has moved closer to art activism. His latest series focuses on the farmers’ protests in India. Farmers holding the fort against the police, the figure of Baba Deep Singh and langars feature here. “It really touches me deeply. It (the farmers’ crisis) affects us equally whether we are in India or the UK or anywhere else. And it’s not just a Punjabi thing. It’s for all farmers in India,” Bhachu says. The artist is keen on paying special attention to the figure of the female farmer, one of the most underrepresented communities within the agricultural sector.

For now, as social media users make Mesmeraki’s illustration go viral, it’s worth noting that for all its imperial past, the Crown’s intriguing stories are no different from its former empire’s. All it took was one sly move in a mash-up.

Give another chance forhigher development: Naidu