When Lal Chand Gupta, who used to sell vegetables in Jalandhar, boarded a Shramik Special Train on May 15 for his native place in Uttar Pradesh’s Gorakhpur district, the world came crashing down for his sons Sandeep (15) and Rahul (17).

As they embarked on journey home, it looked like the end of another journey. The younger one, a student of class 10 and the elder of class 12 at Government Model Senior Secondary School, Ladowali Road, didn’t know when , and if, they’ll be able to return to Jalandhar. While Gupta was worried about loss of income due to Covid-19 induced lockdown, the two boys were worried that the journey home should not end their education dreams.

“We had been attending virtual classes in Jalandhar after the lockdown,” said Rahul, who aspires to join the Indian Army. After reaching their native place, the brother duo checked if they can get good enough Internet speed to continue with the online classes. Once that was done, they were back to attending their school class from their home in Gorakhpur. 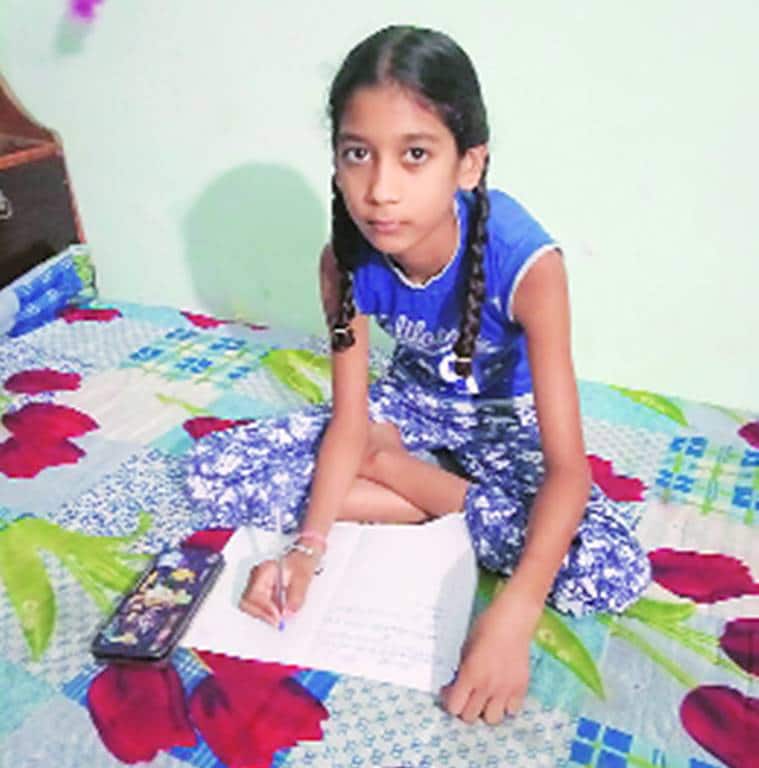 “Our online classes start at 8 am and continues till 1pm,” added Rahul while talking to The Indian Express over phone.

“It hardly matters if we are in Gorakhpur or in Jalandhar when everything — the study material, teachers and even the question papers — reach us through Internet on our phone,” he said.

He hopes to return to Jalandhar whenever schools reopen in Punjab. The brothers had been living in Jalandhar since their childhood and studying in the same school.

Their mother and two siblings live in Gorakhpur. Lal Chand is now doing farming on his small landholding. His sons help him in the fields during evening hours.

“I am happy that their studies could not be disturbed even after our returning to Gorakhpur, all thanks to smartphone and online classes,” he said.

Somewhat similar is the story of six children from an extended family. They include Sapna Kumari, her sister Chandani, brothers Ram Jatin and Ajay Kumar and cousins Deepak and Baski. While Sapna, Deepak, and Baski are class 7 students, the others are senior to them by a year. All of them were studying at Government Middle School, Sahnewal Khurd in Ludhiana, before they had to move back to their native village Balni in Bihar’s Darbhanga district. The siblings now attend classes from Ludhiana on a smartphone.

“We miss our school, but we have no other option,” said Ajay Kumar, adding that they have divided themselves into two groups based on their classes.

“We have also created WhatsApp groups in which we have added our classmates. We discuss lessons and problems . If we fail to sort out any problem, then we call our teachers,” he added.

“It is a new experience,” pitched in Sapna, adding that the telecom service providers offers them 2GB data everyday “which is more than enough for us to attend the classes, download the study material and upload our homework”.
Like Lal Chand, they too had boarded a Shramik Special train on May 15 with their parents — father Dev Narayan Mukhia and mother Meena Devi. The family has been living in Ludhiana for the past 15 years where Mukhia is a contractor in an iron plant.

There are hundreds of students from Punjab who are now attending online classes from the comfort of their homes hundreds of kilometres away in Uttar Pradesh, Bihar and other states.

Sources said that out of around 26 lakh students — pre-primary to class 12 — nearly 24 lakh who are in classes 1 to 12 are supposed to get online study material.

It is learnt that around 2-3 per cent of the children (50,000 to 75,000) of migrants studying in Punjab’s government schools have returned back to their homes states along with their parents. Nearly 50 to 60 per cent of such children are in regular touch with their teachers in Punjab and are also attending online classes regularly.

The others are mostly not able to attend the classes as they don’t have smartphones. Such children were asked to attend the lessons being imparted via Doordarshan, but they cannot appear in the exams without having smartphones.

“Not even 2 to 3 per cent of the children have returned back to their homes states from here. Of those who had returned, around 70 per cent are in touch with us”.

Secretary Education, Punjab, Krishan Kumar said that once the Covid situation begins easing out and the schools reopen, the students who have returned to their home towns, will be back.

Teachers speak to 8-10 of their respective students on phone everyday to track their progress and to attend to their problems.

Sec 377 judgment: An atonement for a grievous error, but a gateway towards greater freedom

2019 is the international year of periodic table: All you need to know

Odisha to include startup and entrepreneurship in school, college syllabi