Punjab chief minister Capt Amarinder Singh’s wife, former Union minister Preneet Kaur, is locked in a triangular battle in Patiala to reclaim the party’s lost turf. With Captain firmly in the saddle, she is hoping to win the royal battle, which she lost to Aam Aadmi Party (AAP) candidate Dr Dharamvira Gandhi in 2014 by over 20,000 votes. Preneet had won the Patiala Lok Sabha seat in 1999, 2004 and 2009.

The AAP, which sprung many surprises in the Malwa belt of the state in 2014 polls, is in disarray. But sitting Patiala MP Dr Gandhi, who was ousted from the AAP and floated his own outfit — Nawan Punjab Party — a part of the six-party alliance Punjab Democratic Alliance, is still a force to reckon with, the fact acknowledged by the Congress which is hitting on all cylinders to clinch the royal seat.

Shiromani Akali Dal (SAD) candidate, former minister Surjit Singh Rakhra, is facing a daunting task to turn the tide in his favour. He is banking more on charisma of Prime Minister Narendra Modi. Preneet, who is contesting her fifth election from the seat, says the mood in Punjab has completely changed from what it was in 2014. “In the last elections, our family resources were divided as Captain Saab was contesting from Amritsar against Arun Jaitley. Now, he is available and is campaigning for me. This is winwin situation for me, says Preneet, who has made development as her poll plank. “In last two years, Captain Saab has spent Rs 1,000 crore in Patiala and many projects are in the pipeline. A vote for Congress will be a vote for development,” she says.

Of the nine assembly segments in the parliamentary constituency, Congress has won seven while two are with the SAD. Despite this, it will not be a cakewalk for Preneet as Dr Gandhi is still a popular face in the segment while Rakhra has a firm grip over rural voters. 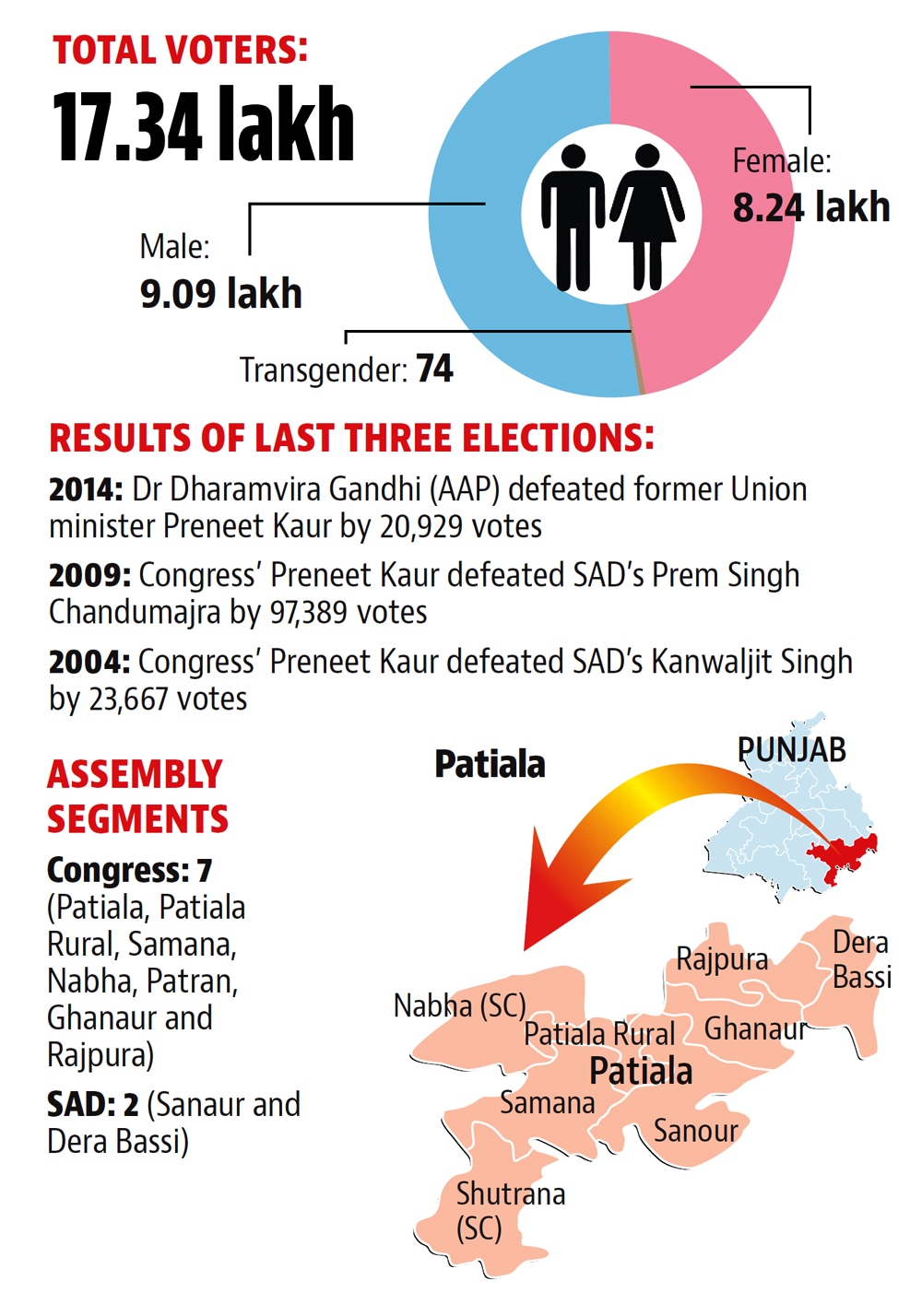 Amidst the development rhetoric, Dr Gandhi has made a unique promise that he will bring opium and poppy husk out of NDPS Act ambit, the issue which finds takers in Patran, Ghanaur, Samana and Nabha areas of the constituency. But with absence of AAP volunteers by his side, it will be an uphill task for Dr Gandhi to repeat the 2014. Dr Gandhi faces another problem. He is still identified with the AAP symbol broom and not the microphone, the symbol the election commission has allotted to his outfit.

Claiming that the BJP would form the government at the Centre, a vote for him will bring major projects in the area, says Rakhra. In his election rallies, Rakhra lists development works of the previous SAD-BJP government and targets the Captain government for its “failure” to fulfil pre-poll promises. SAD has a strong base in Dera Bassi, Samana, Sanaur, Ghanaur, Shutrana and Nabha. In the 2014 polls, the SAD got a lead of 57,000 votes from Dera Bassi.

Though AAP candidate Neena Mittal is not being seen as a threat to key contestants, she will be able to garner the cadre votes.

A home can wait, but not memories of Messi