The results of assembly elections in Rajasthan, Madhya Pradesh, Chhattisgarh, Telangana and Mizoram are expected to have a large bearing on the political narrative in 2019. However, even before these elections are completed and results declared, two divergent opinions have been expressed about the chances of the Bharatiya Janata Party (BJP) in the 2019 general elections.

In an article published in The Print, Yogendra Yadav, who was founder-director of the Centre for the Study of Developing Societies-Lokniti team (before joining politics), has argued that the BJP might suffer a loss of 100 seats from its 2014 Lok Sabha tally of 282 due to setbacks in what he calls the Hindi belt states – Delhi, Haryana, Bihar, Jharkhand, Uttar Pradesh, Uttarakhand, Himachal Pradesh, Rajasthan, Madhya Pradesh and Chhattisgarh. This, Yadav argues, will “put paid to Mr Modi’s prospects of a re-election”. Yadav’s emphasis on the role of the Hindi belt suggests that the outcome in Rajasthan, Madhya Pradesh and Chhattisgarh will be an important indicator for 2019.

The counter-argument has come from Yadav’s former colleague Sanjay Kumar, who succeeded him as the director at CSDS-Lokniti. In an article published in Outlook magazine, Kumar offers an interesting “macro explanation” for why the BJP might not lose in 2019. The crux of his argument is that BJP’s victory margins in 2014 were so large that it will take a really large swing to make a big dent in its seat tally. The kind of anti-incumbency needed for such a big swing is not yet visible, Kumar argues.

An HT analysis of the statistical prognosis by both Yadav and Kumar highlights two important points. The results of the Rajasthan, Madhya Pradesh and Chhattisgarh assembly elections might not be a good indicator of the outcome in 2019. And complacency could harm the BJP even in seats it won with a big margin in 2014.

Why are the outcomes in Rajasthan, Madhya Pradesh and Chhattisgarh not a good indicator for the BJP’s 2019 Hindi belt performance?

Yadav is right in underlining the importance of the Hindi belt for the BJP.

An HT analysis of Lok Sabha results since 1989 shows that more than half of the BJP’s total seats have always come from this region.

Yadav expects the BJP to lose at least 100 seats in the Hindi belt in the 2019 elections. This will mean that the BJP tally goes below 90 in the region. This has happened only twice, in 2004 and 2009, in the Lok Sabha elections held after 1991. It is in this period that the BJP became a serious contender for forming a government at the centre.

A state-wise comparison of BJP seats in 1999, 2004, 2009 and 2014 can give us an idea about the relative importance of each of these states in determining the BJP’s overall Hindi belt performance. The year 1999 was when the BJP formed the National Democratic Alliance (NDA) government which completed its full term. (See Chart 1) The results are interesting. In 2004, the BJP actually increased its seat tally by 11 seats in undivided Madhya Pradesh, and Rajasthan — the Hindi belt states going to the polls currently – in comparison to 1999. Yet, its total Hindi belt tally came down by 34. This was because it lost 33 seats in undivided Uttar Pradesh and Bihar. The year 2009 was even worse for the BJP because it lost seats even in Rajasthan and undivided Madhya Pradesh.

The takeaway from this is that even a good performance in Rajasthan, Madhya Pradesh and Chhattisgarh is no guarantee of a good performance by the BJP in the Hindi belt. Both Uttar Pradesh and Bihar are likely to be a better index of opposition unity against the NDA compared to 2014. This is likely to dent the BJP tally in these states. The magnitude of the loss will be an important determinant of the BJP’s performance in the Hindi belt.

Bigger victory margins are no guarantee of retention in landslide elections

A majority of BJP’s victories in the 2014 Lok Sabha election were by bigger margins. The BJP won more than 40% of its 282 seats with a margin of more than 20% of the votes polled. Just one-fourth of its seats had a victory margin of less than 10%. HT has looked at all Lok Sabha elections since 1985 and calculated the probability of a party retaining a seat in the next election. Kumar’s argument of bigger victory margins increasing the probability of retention in the subsequent elections seems to hold generally.

However, the 2004-09 and 1984-89 cycles are exceptions to this trend. The mismatch is bigger in the 1984-89 election cycle, when the probability of retention in seats with the smallest victory margins were the highest. (See Chart 2) 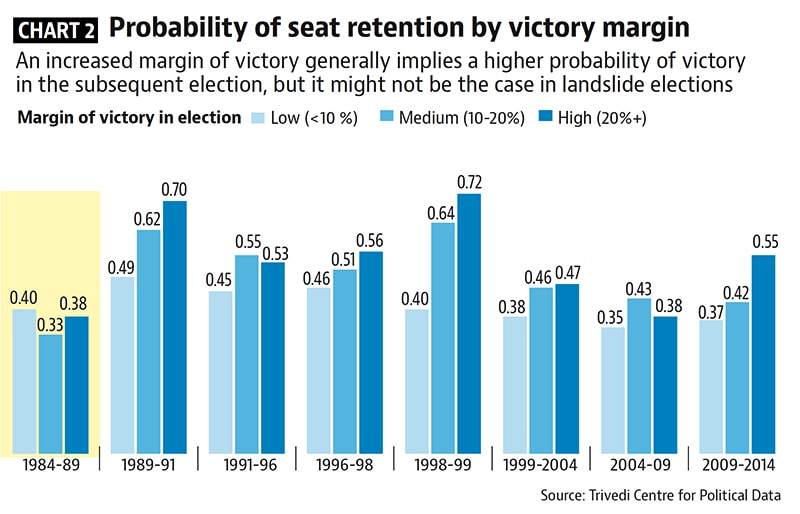 The 1984 election produced a landslide for the Congress, which won a four-fifths majority in the Lok Sabha riding on a sympathy wave generated by the assassination of Indira Gandhi. It is worth highlighting that 2014 was another landslide election in India’s political history; the BJP became the first party in 30 years to win a Lok Sabha majority on its own. Hence, the likelihood of the BJP retaining the seats it won with bigger margins in 2014 could be lower than usual.

The results of by-polls such as Gorakhpur, Phulpur and Kairana in Uttar Pradesh, which the BJP failed to retain despite winning them by large margins (all by more than 20%) in 2014 are some such examples.

To be sure, an analysis of previous by-poll results by Gilles Verniers of Ashoka University in The Indian Express has shown that by-poll results are bad indicators of subsequent election results.

The upshot is that there are serious hazards in relying on either the results of ongoing assembly elections or 2014 trends to predict what awaits the BJP in 2019.

Why hasn’t the South kept pace on OTT platforms?

Raaga meets a cappella: This melodious rendition of Albela Sajan may mesmerize you. Watch

What should be done when COVID worsens?

‘If you do piecemeal investigation, it’ll keep biting on backside’: Vaughan to CA