There is no dearth of talent and ideas when it comes to sculpting idols and deciding on themes in Kolkata. A handsome prize money/reward is a huge incentive 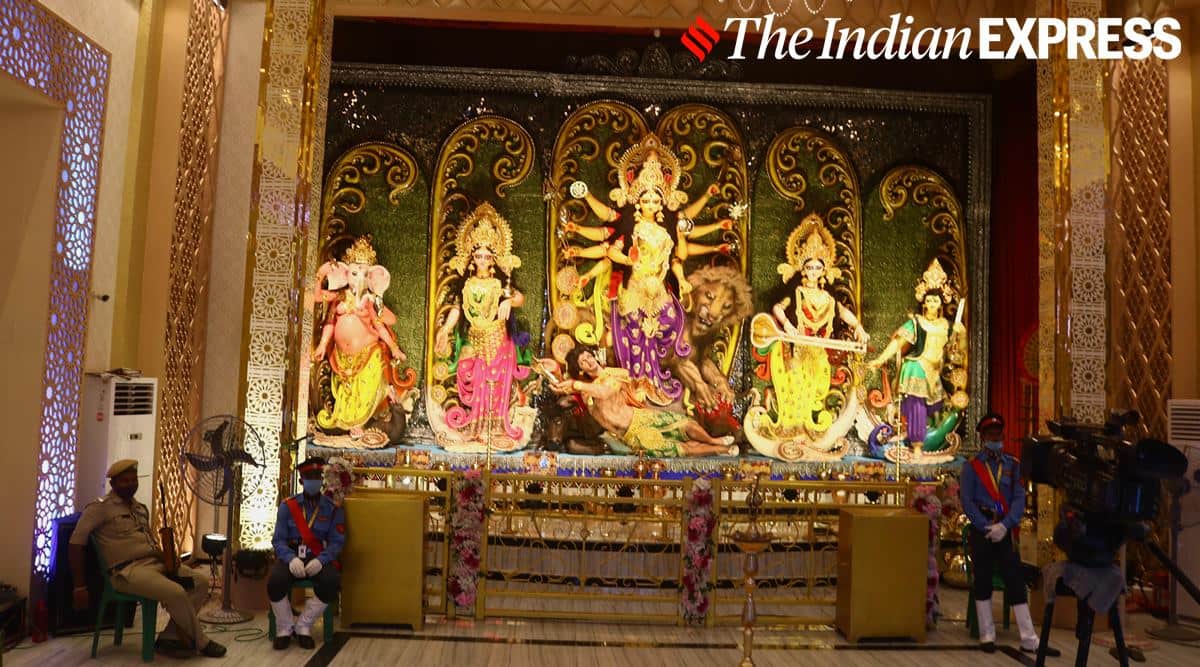 Durga Puja in West Bengal, mainly in the capital city Kolkata, is synonymous with opulence and themed-pandals, which depict the various aspects of human life. It draws people from all across the state — sometimes even the country and the world — who make a pit stop here to enjoy the creative splash of one of the biggest cultural events in the country.

Last year, amid the pandemic, the coronavirus was a hit theme among idol makers and pandal planners. If you remember, there was even the ‘migrant mother‘ (Goddess Durga in Kolkata’s Barisha Club fashioned to look like a migrant worker carrying her children), which made a lot of news, owing to how topical it was.

And in the years before that, there were depictions of many things under the sun, from travel-themed shamianas, to idols sculpted with biscuits and even ice! Let’s just say, there is no dearth of talent and ideas when it comes to sculpting idols and deciding on themes in Kolkata. A handsome prize money/reward is a huge incentive.

While the pandemic rages on and things continue to look grim, it has not stopped people from unleashing their creative talent, which has been covered in the news and photographed widely in the days leading to the actual commencement of the festival this year. While there is a cap on gatherings, and social-distancing norms continue to be followed, the typical buzz and chaotic madness is absent. But, you can still enjoy the event virtually.

Here’s a round-up of some interesting themes this year. Should you consider venturing out, make sure you safely enjoy the festival.

* Trust a Kolkata Durga Puja pandal to showcase whatever is making news in the form of an entire pandal dedicated to it. Expressing solidarity with farmers — who continue to protest around the country against Centre’s agrarian laws — in the wake of the recent incident in Uttar Pradesh’s Lakhimpur Kheri district, a puja pandal in Kolkata has been crafted to mimic the harrowing episode. 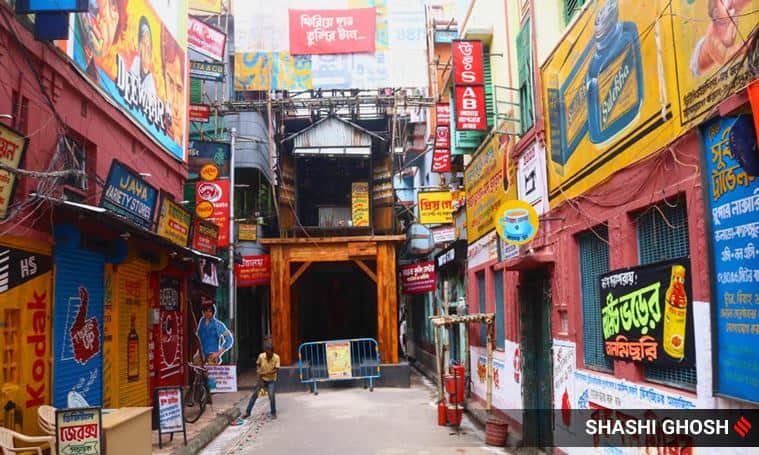 * Indian Express photographer Shashi Ghosh also shared pictures of a puja pandal in Nalin Sarkar Street, which is made to look like 70s’ Bollywood, complete with hand-painted advertisements, and vintage movie posters and actor cutouts. The theme has been aptly named ‘Phiria daou tulir tan‘, meaning, ‘give us back the brush stroke’ — a form of art which has been lost in the digital age.

* This year, Kolkata’s Sreebhumi Sporting Club has replicated Dubai’s Burj Khalifa. The club has designed a 145-feet pandal which has been modelled to look like the iconic Dubai tower. 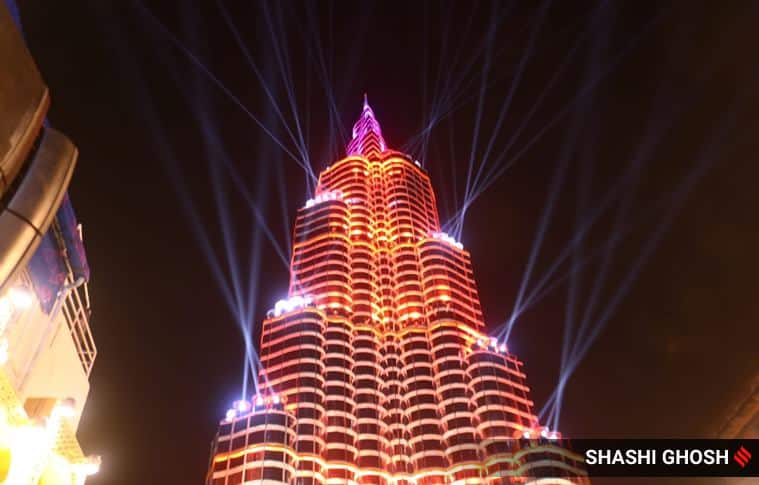 * The Hatibagan Sarbojanin Club has modelled its pandal on the theme ‘Pichutan‘, which means a yearning or a longing for something that you cannot go back to. Simply put, it recreates the Kolkata of the 70s. This year’s puja will be conducted to show how it used to be performed in old Kolkata several decades ago. 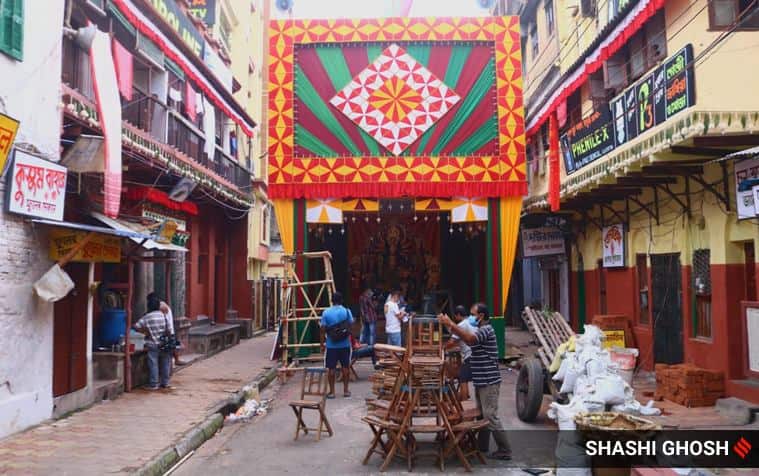 * This picture from Kashi Bose Lane Durga Puja, which is in its 84th year, is mesmerising. While the theme is unknown, we love the aesthetics and the intricacies. 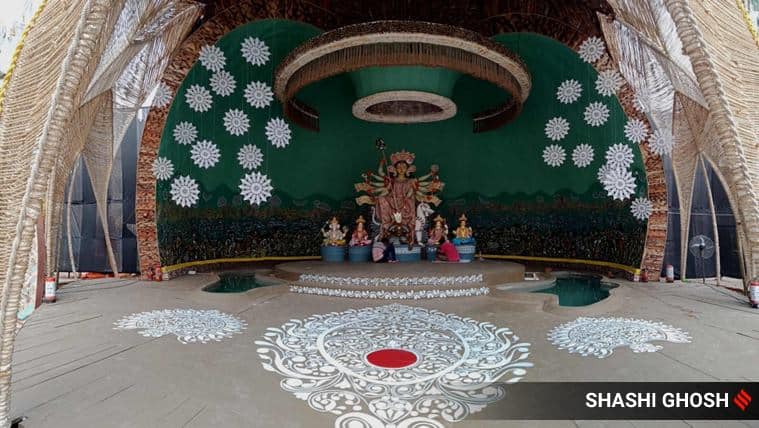 * In the Bandhu Mahal Club in Baguiati, one idol has been installed with eyes of gold and another idol has been draped in a saree that has gold embroidery on it. The saree costs Rs 1.5 lakh, and the eyes of the idol are made of more than 10 grams of gold, Kartik Ghosh, an organiser, was quoted as telling ANI.

* In north Kolkata’s Nabin Pally Puja, the pandal has been designed in a way so as to pay tribute to those who died during the second wave of the Covid infection. Photos of the deceased, hanging urns and a Mahishasura with folded hands give a haunting reminder that the pandemic is the bigger evil to fight. 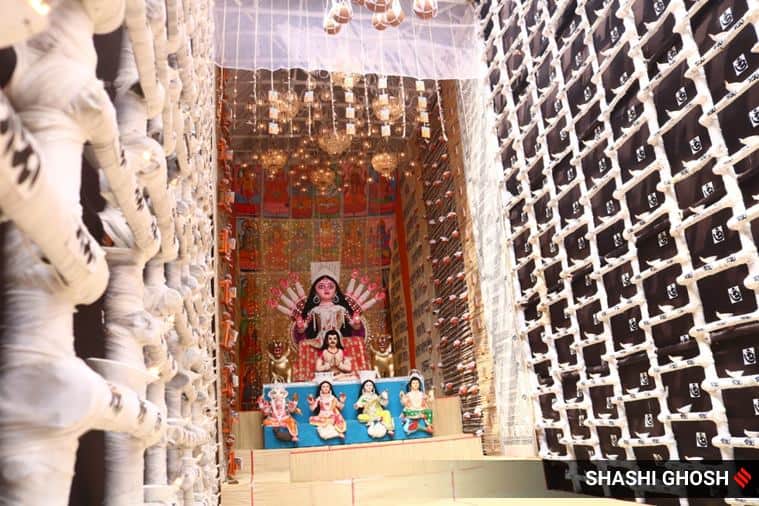 Schools in Jammu reopen for Classes 10, 12

What has made Kajol smile?