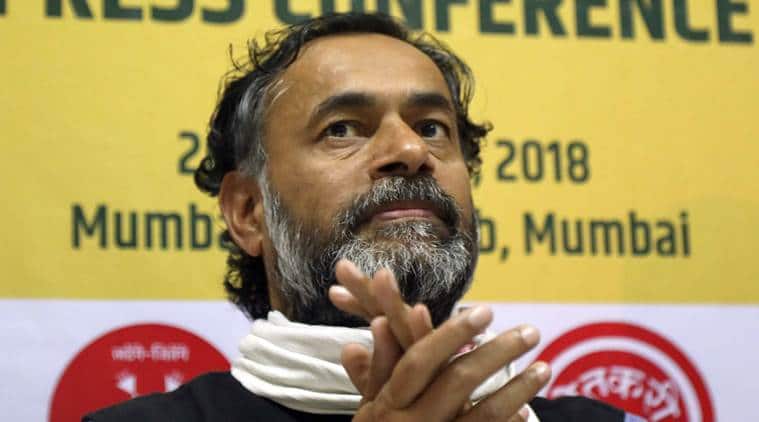 Swaraj India leader Yogendra Yadav has said India is in the midst of a “policy-driven crisis in which the farmers are bound to suffer despite a bumper crop.” Alleging that the “agri-trade policy in this country is dictated by the traders’ lobby”, Yadav said he hoped “the government will suspend the imports for pulses in the face of a bumper harvest”.

Chickpea growing states of Maharashtra, Rajasthan, Uttar Pradesh, Andhra Pradesh, and Karnataka have been under the fear that imports will dampen their bumper crop. The Union Agriculture Ministry estimates that India’s chickpea production for 2019-20 will be at 11.22 million tonnes (mt), a sharp increase from last year’s 9.94 mt and marginally short of 2017-18’s record high of 11.38 mt.

The Swaraj India leader, however, is not sure an import ban will provide respite to Indian farmers. “The Agriculture Ministry in this country does not really have the final say about matters of import. It is the Commerce Ministry which determines the import policy. What is going to happen is that someone in the Commerce Ministry will wink the traders’ lobby about the upcoming suspension of pulses import and the traders will place their orders by the time the import ban arrives,” Yadav claimed. Meanwhile, the bumper chickpea crop has farmers in Canada worried. North American nation happens to be one of India’s top pulses exporter. A Reuters report quoted agriculture minister of Canada’s Saskatchewan province, David Marit, as saying that India’s trade policy flip-flops have fuelled uncertainty among Canada’s farmers. “We would like to see consistency and transparency in market access,” Marit was quoted as saying on the sidelines of the Pulses Conclave, an industry conference. Saskatchewan is Canada’s biggest pulses producing province.

Yadav said he wished Indian ministers were as empathetic and concerned about the farmers’ fortunes as their Canadian counterparts are.

Malini Saba, an entrepreneur with investments in the agro-business in South and Southeast Asia, said the inconsistent agri-trade policies of the government, in a way, also compromise the country’s foreign policy as it impacts the bilateral relationship between India and Canada. “India, as such, should prefer its own farmers rather than calling for imports from overseas,” she said.

Talking to indianexpress.com, All India Kisan Sabha (AIKS) leader Chhagan Lal Choudhary said the market prices of the pulses will fall drastically if the government continues to import. “The situation is such that the Indian farmer will not get his deserved price if the government continues to import. The pulses are rarely procured at the Minimum Support Price (MSP) anyway. Imports will further deteriorate the situation,” he said.

I Didn't Feel Sh*tty Enough, So I Decided to Look Up David Beckham's Net Worth