Opposing the Citizenship (Amendment) Act, Rahul Gandhi on Saturday slammed the Bharatiya Janata Party and Rashtriya Swayamsevak Sangh, saying the Congress will not allow them to attack the culture and identity of Assam and expressed apprehension that the state is returning to the path of violence due to the ‘anti-people’ policies of the saffron party.

Addressing a public rally at Guwahati, which had seen violent protests against the Citizenship (Amendment) Act, 2019, the former Congress president appealed all to be united and tell the BJP that culture and identity of Assam ‘cannot be attacked’.

“We will not allow the BJP, RSS and the ‘chaddi-wallas‘ to attack the culture, language and identity of Assam. RSS and Nagpur cannot run Assam and attack it.

“If they (BJP-RSS) thought of suppressing language and identity of North East, then they have not recognised you yet,” he told the huge gathering at the anti-CAA rally.

The Congress leader said he had warned the people of Assam before the Assembly elections in 2016 that hard earned peace would be hampered if the BJP came to power. 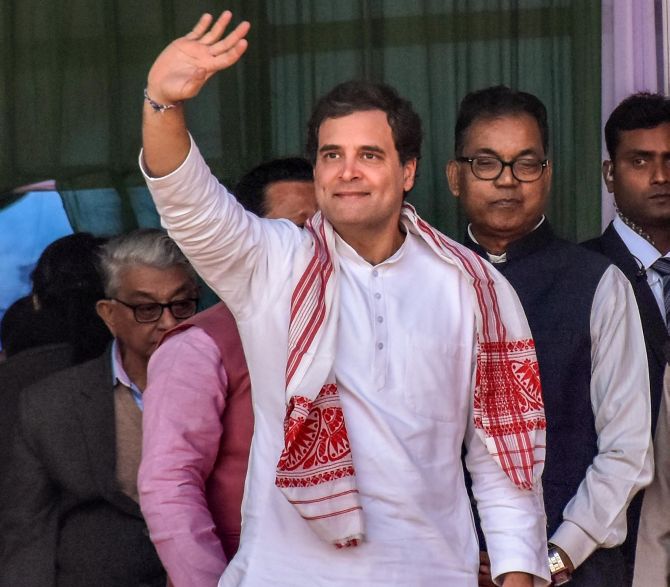 “I remember telling in every meeting before elections that if BJP formed the government, then peace, brotherhood and development would vanish from the state and violence would return. Today, I am sad to say that it has become the truth.

“I fear, the state is again returning to the path of violence due to the BJP,” Gandhi said.

He said the strength of the state is brotherhood and love, and development cannot be attained through hatred, anger and discrimination.

“Peace came to Assam after a lot of struggle. Assam Accord is the foundation of peace. So, the spirit of Assam Accord should not be broken.

“It gave peace to Assam and everyone loves this Accord,” he added. The Congress MP asserted that his party is against the contentious CAA and had strongly opposed it in the Parliament.

The Congress leader said he learnt love and brotherhood from Assam and speaks about it in his lecture in every other state.

“Earlier, there was violence. Then all united and then non-violence, peace and development came in the state.

“I am sad to inform that five youths were killed in protests and I am going to their homes after this meeting,” he added.

Gandhi questioned the governments at the state as well as Centre for ‘firing on youths protesting peacefully and killing them’.

“In the country, wherever the BJP goes, there is only hatred, violence and fighting between people.

“BJP does not want to listen to peoples’ voice and wants to suppress that. If people are saying something peacefully, then there is no need to kill. It can be heard with love,” he said. “With demonetisation and GST, you (BJP) killed the strength of Bharat Mata, you attacked Bharat Mata… (Narendra) Modi said of bringing back blackmoney, but instead he gave away Rs 3.5 lakh crore to his industrialist friends. Tax liabilities worth Rs 1.4 lakh crore were waived recently.

“How much money have you (BJP) waived to farmers for their loans? The aim of this government is to keep the people in Assam and India busy in fighting and give all the money to his 15-20 industrialist friends,” he alleged.

Gandhi also visited homes of two persons — Sam Stafford and Dipanjal Das — who were killed in firing by security forces during protests against the CAA earlier this month.

After addressing the public rally, Gandhi headed towards the home of Stafford at Hatigaon area in Guwahati. 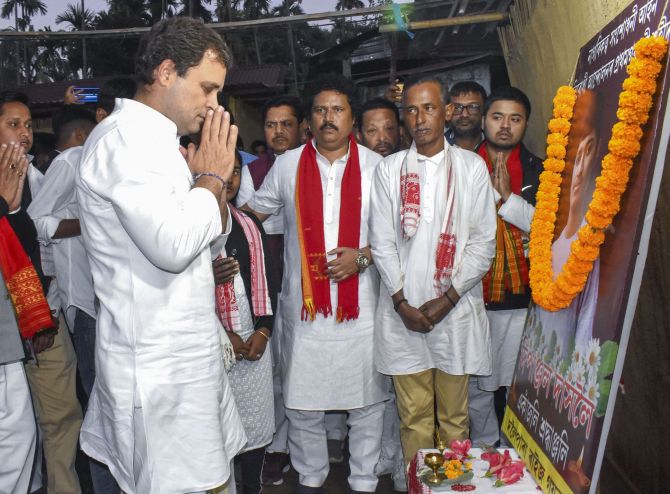 He paid floral tributes to the portrait of the 17-year-old youth, who was killed in firing by security forces on December 12 near his home during anti-CAA protests.

The Congress MP met parents and other family members of the youth and expressed his deep condolences, Stafford’s uncle said.

Gandhi also visited the home of Das at Chaygaon in Kamrup district.

After paying tributes, Gandhi met the family of Das and expressed his condolences. 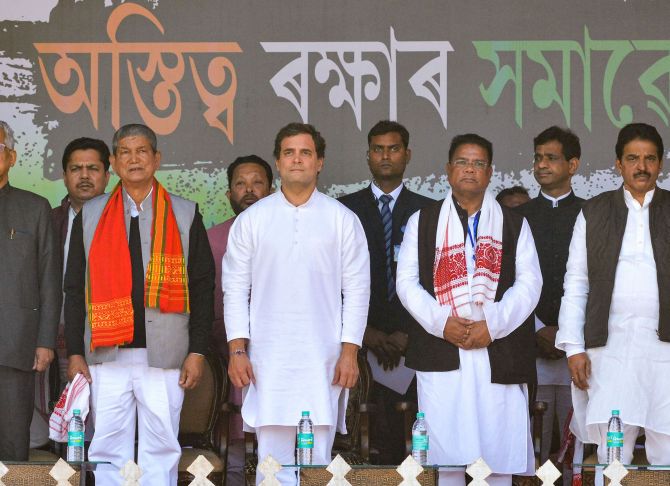 “He (Gandhi) asked the local MLA Rekibuddin Ahmed to give an e-rickshaw to my father and arrange a private job for me and my other brother in Guwahati,” said Dipanjal’s sister Sangita Das, who works as a private security guard in Bengaluru.

Das was also killed in firing by security forces on December 12 in Guwahati during anti CAA protests.

Four persons were killed in firing by security forces during anti-CAA protests in the state this month.

Driver of an oil tanker was killed when miscreants set ablaze to his vehicle at Dhekiajuli in Sonitpur district on December 14 during the protests.

Meanwhile, peaceful protests were held on Saturday in all the districts in the Brahmaputra valley against the CAA.

‘Thinking of giving up my smartphone’: Supreme Court judge on need for social media guidelines

Rashmika Has A Major Crush On Vijay, Not Deverakonda

My Name is Khan, A Decade Later
We and our partners use cookies on this site to improve our service, perform analytics, personalize advertising, measure advertising performance, and remember website preferences.Ok