‘I am as Bengali as they come in my cultural and personal orientation and I think probably all the BJP candidates who are contesting are pretty non-vegetarian in their food and as Bengali in their cultural orientation.’

It has been quite a leap for Swapan Dasgupta from the world of journalism into the rough and tumble of Indian politics.

Early this year, it was evident that something was on the cards when the New Delhi-based Dasgupta registered himself as a voter in South Kolkata after a gap of more than two-and-a-half decades.

He has now been given a ticket by the Bharatiya Janata Party from Tarakeshwar for West Bengal’s assembly polls.

A recipient of the Padma Bhushan, Dasgupta, 65, has been committed to the BJP’s ideology since 1990.

In early 2018, Prime Minister Narendra Damodardas Modi asked Dasgupta, a nominated member of the Rajya Sabha till he resigned this week, to focus on Bengal.

Dasgupta, who is being viewed as a likely chief ministerial candidate if the BJP wins power in Bengal, is immersed in a hectic campaign schedule as his party takes on Chief Minister Mamata Banerjee’s Trinamool Congress.

In an exclusive interview with Rediff.com‘s Senior Contributor Payal Singh Mohanka, Dasgupta talks about the road ahead, his vision of India and the issues plaguing Bengal.

You are a highly acclaimed journalist and are now plunging into the heat and dust of the Bengal assembly election campaign. How would you describe the campaign experience and the transition?

It’s certainly very hard work. It’s a different experience because as a journalist you could detach yourself and it’s possible for journalists to often make value judgements.

Here you have to be more responsible for what you say and do.

Perhaps in the process you can have a thicker hide.

And the value of what you say has to be greater than 24 hours, which is the case for a journalist.

In that sense you are far more accountable. You have to measure your words with a greater degree of circumspection.

I believe in that. You can’t be wild with your promises.

Is there any particular reason why you have been given the Tarakeshwar seat?

The day it was announced that morning I got a call from Mr Amit Shah saying they wanted me to contest and he had chosen a seat which he felt was the appropriate one for me.

That’s how Tarakeshwar happened. He didn’t go into the rationale of why this seat was chosen.

Wasn’t the controversy regarding your resignation from the Rajya Sabha avoidable?
Why wait for the Trinamool Congress to raise the issue?

Let me explain. I have been associated with the BJP for a very, very, long time, since 1990.

When I was nominated to the Rajya Sabha I felt the reason for my nomination had less to do with my political beliefs and more to do with my journalism, my writings and that I have a certain identity which is outside the world of party politics.

I felt I was appointed on the strength of that therefore with the full knowledge and blessings of the national leadership I chose to sit without the party label.

So my identity in the Rajya Sabha was that of someone who has been selected by the President.

Therefore while I participated in debates in the Rajya Sabha and other forums in Parliament, I always stayed outside the world of politics.

Outside Parliament it was different, but within Parliament that is how I sat.

Now this is a fine distinction which I made.

There was no question of contesting elections at that time.

When the question of contesting elections came up, the TMC made a fuss about it not realising that at any event before I file my nomination I would have given up my seat.

So they probably anticipated my decision and made a controversy out of it. 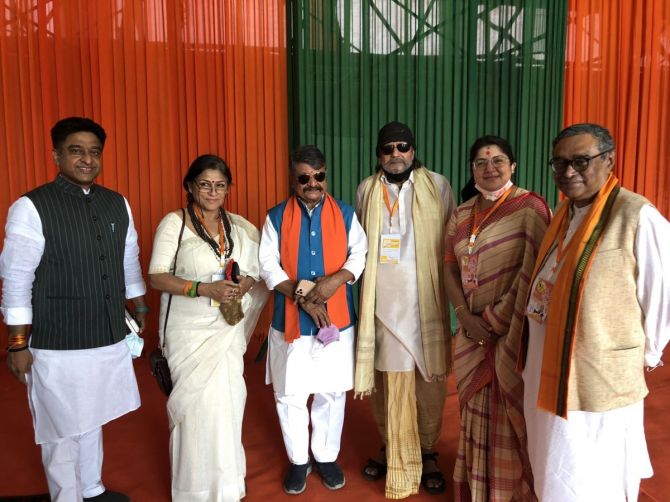 Were planning to step down any way?

After I was told to contest the elections, the idea that this would be in conflict with the Rajya Sabha was something which obviously did cross my mind, but they (the TMC) seemed to have jumped the gun and created a controversy.

I wasn’t going to be doing something in violation of the Constitution.

Maybe what was in violation of the Constitution in the first place was the fact that I chose to sit as an unattached member.

You could argue that!

The voter in Bengal is swamped with confusion. It seems, for some, a choice between the devil and the deep sea. Your thoughts?

The main reason I believe why the BJP has emerged as a very viable alternative has got to do with the fact that today for the first time we are trying to achieve a couple of things.

One, we are trying to move away from this culture of violence which is the curse of Bengal for the past 50 years.

The second reason is we are trying to integrate Bengal within the national framework.

This contrived conflict with the Centre has marred Bengal politics for a very long time.

This continuous anti-Centre sentiment has come in the way of the development of Bengal.

A state which was once in the forefront is now in the bottom league. To reverse that trend I feel this is a real alternative.

Since 1977 we have not had the same government in Kolkata as the Centre except for a few brief alliances.

But more than a different government at the Centre, it has been a series of permanent conflict with the Centre.

In the process Bengal has ended up as the step child?

Step child or not, it has certainly not been in the forefront.

It has somehow fallen off the top rung of the national radar.

How would you address the fears being expressed in Bengal about interference in dietary preferences, fears of an RSS-dictated change in the spirit of Bengal?

These are ridiculous suggestions. I am as Bengali as they come in my cultural and personal orientation and I think probably all the BJP candidates who are contesting are pretty non-vegetarian in their food and as Bengali in their cultural orientation.

If you can’t attack a person for what they believe in, you try and manufacture issues.

There is also concern about a state where there will be no space for dissent.

One of the things which I keep telling people when I go and meet them is one thing we will create is a situation where you can disagree with me and tell me, that is your right.

Your vote is something which you must exercise, not someone exercising it on your behalf.

The Modi narrative is seen by its critics as a challenge to the very idea of a secular, inclusive India?

They have been crying wolf for a very, very, long time.

India in all its ways has not changed.

What has changed is the relative importance of those who are today crying wolf.

They are crying wolf because there was a time when they set the agenda, today they don’t.

Just because their importance has declined that means the space for freedom of thought in India has shrunk.

I think one of the reasons why this is happening has got to do with the fact that the decision-makers in India, the nature of the political elite in India has changed since 2014 and a lot of people have not been able to reconcile themselves to this change.

They therefore equate this change with the absence of democracy.

I feel this is the churning of the decision -making process.

Democracy is being followed in every way. People’s right to vote for one person or reject another person has never been taken away. 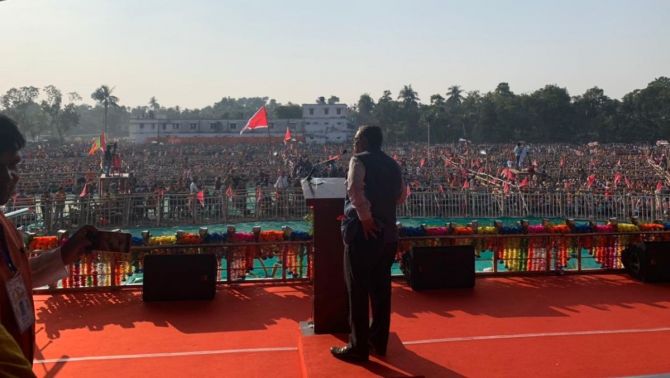 In the sphere of education, vice-chancellors are appointed based on political leanings. Your comments?

I think the politicisation of education is something we have to worry about. We have to guard against that in every way.

I think what is happening in India in its own way has been a process, it’s a technocratisation of education and when people believed in a certain political consensus, the Nehruvian consensus, so it is that change.

It is a change that has been there in different spheres and it is a different direction of our polity.

As far as education is concerned, the old assumption was the Nehruvian worldview that was seen as the natural thing for India.

Anything apart from that, people who were technocrats and could aspire and get to the top position was not something which the earlier dispensation had thought was possible.

While the aim of the ruling party seems to be to somehow win elections, isn’t the thought of an India without an Opposition frightening?

Well is there an India without an Opposition? I think there is a hell of a lot of opposition!

Coming to Bengal, for the BJP this is being seen as the most crucial election of 2021.

Yes Bengal is not only crucial for the BJP, ironically it is a party which originated in Bengal, but then disappeared from it.

Today to get back and try and become the ruling party in Bengal is a huge leap.

And I feel the outcome will have enormous national consequences.

How does the BJP propose to handle the strife within the party in Bengal for tickets?

The party has grown exponentially in Bengal in the past three or four years and naturally people from different political traditions have come into the party.

It’s a question of making an adjustment and trying to reconcile people.

By and large it has been successful but yes there are cases where people have different outlooks.

This is a question of political management more than anything else.

Your association with the BJP goes back to 1990. What drew you to this ideology?

It was a challenge. It was trying to resurrect the view of nationalism in India at a time when it seemed India was going to be split apart by different forms of social pressures.

It was the only way, to my mind it seemed, of actually keeping India united, the idea of India.

This was a different ideology which emerged after the freedom struggle.

You are being seen as one of the chief ministerial faces for Bengal.

At one level that is very flattering, but I don’t think that’s how chief ministers get elected.

But I think it’s also very good that the underlying assumption is that the BJP is going to be the winner of this election.

That to my mind is something that’s reassuring, not so much that they think of projecting me as the chief minister.

Sitaram Yechury on Somnath Chatterjee: ‘Today, we have lost a champion of democracy’

India will have more transactional relation if Trump comes back to power: Tharoor