The Congress may stand a better chance in the assembly polls if it followed the ‘Himachal model’, suggests N Sathiya Moorthy. 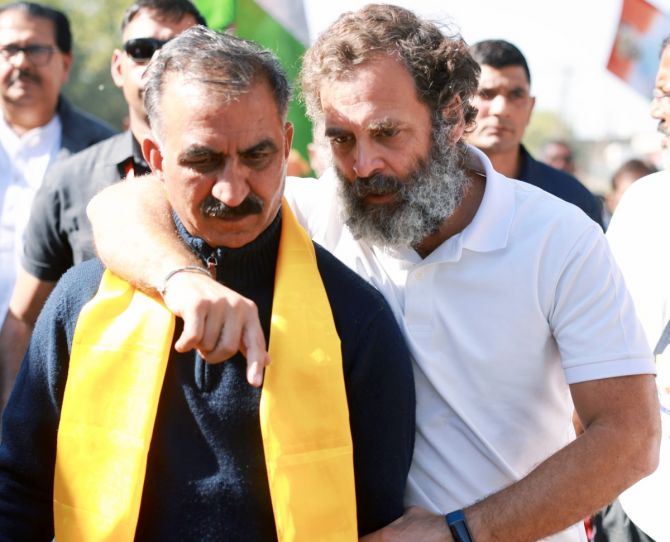 Even though the ruling BJP’s over-doing the celebrations over the unprecedented victory in the Gujarat assembly polls cannot hide the reverses in the accompanying in Himachal Pradesh elections and also those to the Delhi municipal corporation, it is not the end of the road for the party ahead of the crucial 2024 Lok Sabha polls.

But the same cannot be said about the Congress rival, for which there a series of survival tests in the form of assembly polls in 12 states and Union territories ahead of the Lok Sabha polls, not that the BJP could afford to lose them either during the long run-up to the parliamentary elections.

The same cannot be said about the AAP, either, after wrested the Delhi corporation from the BJP after 15 years, unless it develops upon the suicidal tendency displayed by joining the Gujarat fray, which was not that of the party.

AAP did a bad job in Gujarat, but like the BJP in Himachal, it hid this by claiming as if its aim was only to use the state polls only to acquire the status of a ‘national party’.

In the final analysis, a ‘national party’ does not confer any special status other than a nationally reserved election symbol that could ensure that the party’s candidates do not have to contest in different constituencies in the same state on different symbols, as independents.

The election schedule between now and the Lok Sabha polls should be daunting for political party.

It is more so for the Congress, which is going through a leadership transition, which actually is a leadership crisis.

The party, it is believed, may also be faced with a cash-crunch in this era of high-spending polls, despite the Election Commission’s efforts and claims to the contrary.

There are nine assembly polls in 2023, and four more ahead of the Lok Sabha polls.

Where the assembly polls and Lok Sabha polls fall simultaneously, the EC has applied different yard-sticks to different times.

The ruling party at the Centre seeks to make the maximum out of the opportunity/challenge.

The Opposition party, whether the Congress now or the BJP in its time, are put on the defensive, more often than not. 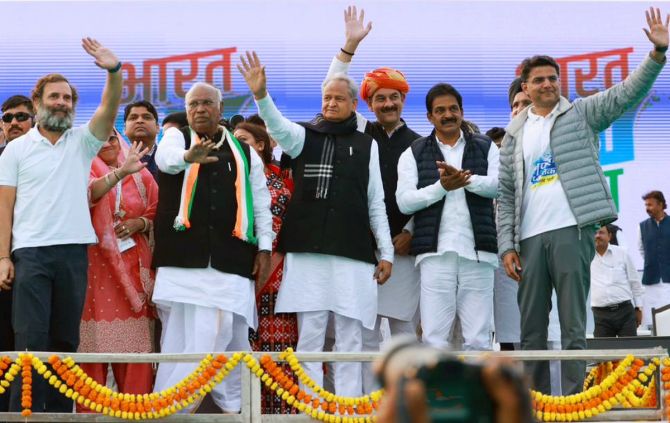 Assembly polls are due in Meghalaya, Tripura and Nagaland in February 2023.

The BJP is a partner in the ruling coalition in all three states, where regional parties have their chief ministers.

The first of the more crucial polls in four states begins in May, when the BJP-ruled Karnataka is scheduled to have assembly elections.

This is to be followed by Chhattisgarh (currently ruled by the Congress) and Madhya Pradesh (BJP), along with Mizoram (Mizo National Front) in November, followed by polls in Congress-ruled Rajasthan in December.

Assembly polls are due also in Telangana, where the ruling Telangana Rashtriya Samithi changed its nomenclature to ‘Bharat Rashtriya Samiti’ on its way to acquire ‘national party’ status’, as if it would help Chief minister K Chandrasekhara Rao’s prime ministerial ambitions as the common candidate of a joint Opposition, which is nowhere in sight.

Ahead of the Lok Sabha polls (or, accompanying it) in the summer of 2024 are assembly elections that will fall due in BJP-ruled Arunachal Pradesh, the Biju Janata Dal’s Odhisa — whose five-time Chief Minister Navin Patnaik has the potential to become an acceptable post-poll PM for the non-BJP parties, with or without the Congress in it — part from Andhra Pradesh (YSR Congress) and Sikkim (Sikkim Krantikari Morcha). 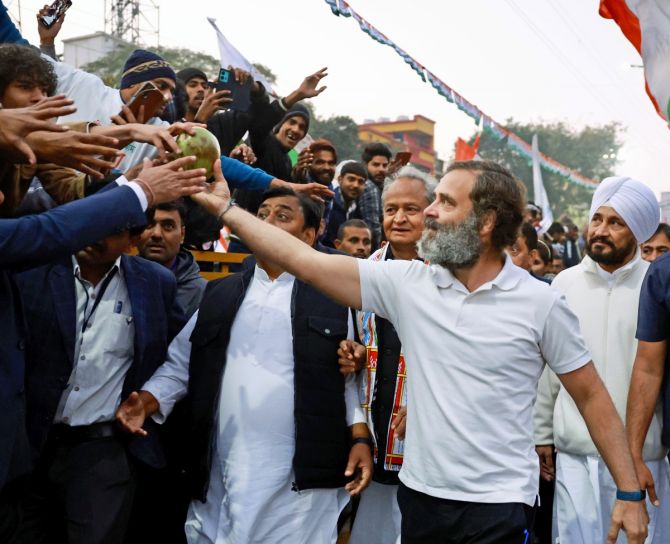 For the BJP, every one of these elections is crucial, whatever act it may put out in public.

For the rival Congress, each one of them is even more critical to its very survival after the Lok Sabha polls.

A credible and creditable performance alone would help the Congress negotiate a respectable number of seats from multiple regional allies, existing and prospective, in different states.

That could include states like Maharashtra and Haryana (both October 2024), and Jharkhand, where the party is a partner the JMM-led ruling coalition and assembly elections are due towards the end of 2024.

But this list would have to wait for the Lok Sabha polls, and so could the maiden assembly elections in Jammu and Kashmir after it was made a Union t=Territory in 2019.

None in the Congress, especially those left behind after all those defections and exits over the past eight years, may be willing to talk about it in public, yet the party fought the victorious Himachal elections on local issues under a local leadership.

It was an accident, in which the only identifiable national leader to sporadically participate in the poll campaign was Priyanka Gandhi Vadera, one of the many general secretaries.

It is anybody’s guess if a Nehru-Gandhi scion’s campaign in Gujarat helped matters, or would they have to take the blame for the party’s near-complete rout in the home state of Prime Minister Narendra Modi and Union Home Minister Amit Shah, the party’s successful strategist at the national-level. 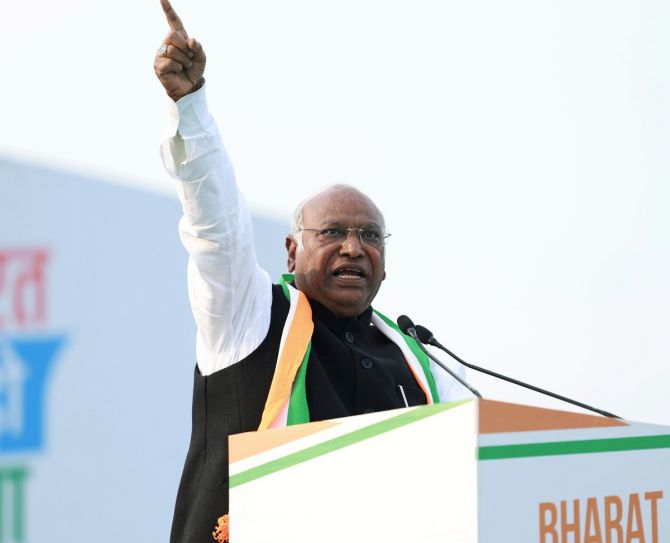 The first in the row of coming assembly polls where the Congress counts and the BJP is the only rival are Karnataka in May 2023, followed by Chhattisgarh, Madhya Pradesh and Rajasthan (November-December).

The Karnataka polls are crucial for the party even otherwise.

Incumbent party President Mallikarjun Kharge, a Nehru-Gandhi loyalist yet not one of them, hails from the state.

Apart from the high-pitched campaign that competing local leaders in state party president D K Shivakumar and former chief minister Siddaramaiah seem wanting to post unitedly, at least pre-poll, the question remains if Kharge’s image as a Dalit leader in his own limited way would help the party to defeat the BJP.

The party will also have to decide if it should go alone or want to have an alliance with the H D Deve Gowda-led Janata Dal-Secular as it did last time.

The alliance won and the JD-S’s H D Kumaraswamy became chief minister, only to be upstaged by BJP veteran and former chief minister B S Yeddyurappa.

Definitely, the Congress has a fairly strong base in the state, and can post a good poll campaign without anyone from Delhi, especially a Nehru-Gandhi involving themselves.

The latter’s presence by itself could take the campaign against the party to a new low, and their absence could help the party benefit from perceived anti-incumbency attaching to the BJP government of Chief Minister Basavaraj Bommai, son of the late Janata Dal leader S R Bommai.

In a way, such a tactic could put the BJP under greater pressure than acknowledged, as the Modi-Shah combine, with UP’s Yogi Adityanath chipping in, may not be able to connect with non-committed voters as much as desired and required. 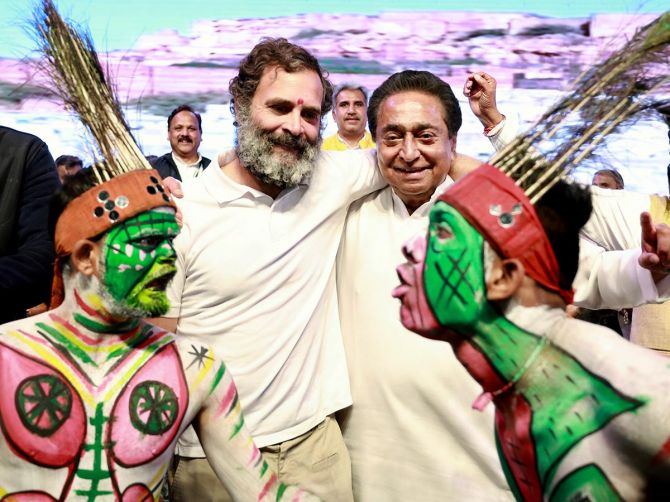 The Congress party’s chances in Madhya Pradesh derives entirely from the ‘anti-incumbency’ that had felled then BJP chief minister Shivraj Singh Chouhan even five years earlier.

The Congress lost power, post-poll to infighting between veteran Kamal Nath, and up and coming Jyotiradiya Scindia over the chief ministership, which the high command was unable to or unwilling to end.

With hindsight, it could be argued that the Congress high command stuck to Kamal Nath, who anyway had the backing of a majority of Congress MLAs, maybe because it had smelt the possibility of the likes of Scindia not being in a position to fight back the BJP Centre, if it unleashed central agencies, as has become the norm since.

Yet, there is no denying that Kamal Nath at 76 looks tired and worn out, especially against the BJP’s incumbent Chouhan, who at 63 is much younger, but whom the voters might have become tired of his four terms in office — of which only the past three were through elections, not defections.

Whether it is Kamal Nath in Madhya Pradesh or party chief minister Bhupesh Baghel in Chattisgarh, who is only 61, there is no identifiable second-line, if it came to that.

It is more like the BJP at present and unlike the Congress, in which faction-fighting in state and district-units used to keep the party constantly in news even when not in power in a state or at the Centre. 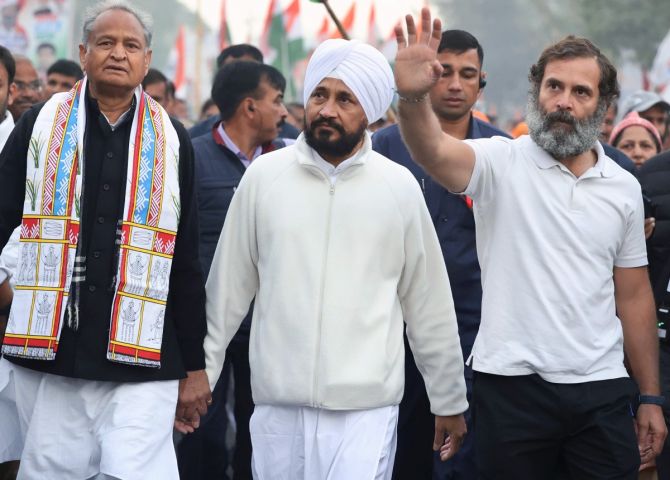 Today, there is no factionalism in most states and districts because they do not see a ready future for the party to fight over.

There is also the unsaid concern bordering on fear that they may end up having to run the respective unit, if given charge, and cannot expect the required funds even for prestigious elections.

But the same cannot be said about Rajasthan, where the party is in power, and the faction-feud between Chief Minister Ashok Gehlot and eternal aspirant Sachin Pilot cannot be hidden, not that the high command at anytime had the energy and instruments to hide the same from public view.

Though Gehlot is only 71, compared to many others of his ilk, his face cannot hide that he is no more the sprightly self that he was as chief minister.

Connecting with younger generation voters could become a problem, leaving aside the continuing in-fighting and inevitable anti-incumbency.

That is being held against Pilot, yes, but then when the high command offered Gehlot the carrot of national party presidency, he declined it when and only when he was told that he had to vacate the chief ministership.

Ask Gehlot’s supporters and they would talk about the ‘injustice’ done to him vis the one-man-one-post norm.

While it was thrown at him, the rule does not apply now to Kharge who is both party president and also the Leader of the Opposition in the Rajya Sabha, whatever the reason. This may have consequences for the party. Yet, overall, the Congress may stand a better chance in the assembly polls if it followed the ‘Himachal model’ though it was also tried out in a way in Gujarat, where the party anyway did not have a chance, leave alone a fighting chance.

Rather, the Himachal model was an evolved one, and got christened that way, post-poll. It was not a planned or pre-meditated strategy, it would seem.

Yet, a creditable performance in these states by itself does not mean anything for the party, especially the public face in the Nehru-Gandhi trio, none of whom can hope for a safe-seat in native Uttar Pradesh and will then have to depend on party chief ministers, if any, or a constituency like Rahul Gandhi’s Wayanad in distant Kerala.

5200 flats in Amrapali projects either bogus or unsold: SC-appointed auditors