As a result of the mass state-led scheme, the processes in the health insurance market could get simplified over time and become uniform 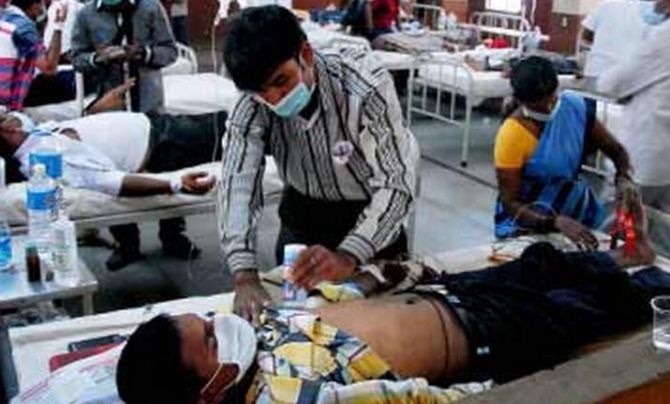 Insurance Regulatory and Development Authority of India (Irdai) Chairman Subhash Chandra Khuntia recently said in one of his speeches that there should be some “simplification and rationalisation of health insurance” products.

According to insurers, the regulator wants to ensure that customers understand policies more easily.

“The focus should be to make the process online, enhance the use of technology, and increase awareness and understanding of insurance products,” said Khuntia.

As a consequence, the Ayushman Bharat National Health Protection Mission (AB-NHPM) will have a net-effect in terms of standardising and simplifying certain processes and aspects of the health insurance business over time.

ICICI Lombard chief operating officer Sanjay Datta says: “Even as the methodology of the scheme will be varied in different states, the scheme will lead to an increased awareness about health insurance and developments in the healthcare ecosystem, given the way the scheme has been designed.”

He adds: “The guidelines for the information technology (IT) platform and the definition of business practices across insurers, hospitals and third-parties are clearly defined.

“It will not change the cover too much. Differentiation and competition among health insurance players will continue, but there will be some standardisation of products.

“From a regulatory standpoint, this will include ensuring exclusions are standardised, and some processes and definitions are streamlined.”

Once AB-NHPM is rolled out, there will be a structural shift in the health insurance market, with a large number of families (as identified by the Socio-Economic Caste Census) availing of a robust health insurance cover.

According to a report by CRISIL, the scheme will improve health insurance penetration to over 50 per cent from 34 per cent at present.

It says, citing an analysis of incurred claims and hospitalisation rates, that the national average premium should be Rs 1,765 per family, against the very low Rs 1,085 per family at present.

Further, insurance executives say that the scheme, if implemented well by governments, companies and their third-party administrators, will lead to a disruption in the health insurance market.

Given that a specific authority, the AB-NHPM, has been appointed to monitor and regulate the scheme, the health insurance ‘product’ under the scheme has been structurally (clearly) defined for different states, say insurance executives.

Since there is regulatory standardisation of how the scheme will work, this will extend to the wider health insurance market over time to ensure that there is clarity on certain issues for customers and smooth operations among insurers.

Antony Jacob, chief executive officer, at Apollo Munich Health Insurance says, “There is a committee which has been recently formed to study and look into the need to rationalise some of the processes and exclusions for retail customers in particular.

“It is too early to say whether there will be uniform regulations across all categories of products.”

Product-specific differentiation and offerings will continue, even as important processes like the payment of claims and collection of medical records could be made uniform across the industry.

This, though, would be subject to regulatory decisions to be notified by IRDAI.

A questionnaire sent to the IRDAI Chairman remained unanswered at the time of writing of this article.

In the near term, Datta says, “There could be innovation from companies based on the scheme; people could buy higher health insurance covers as AB-NHPM will be universal.”

Across states, depending on the existing healthcare infrastructure, both in terms of hospitals and professional personnel, there are differences in the prices of packages and the premium rates charged by insurers.

“The emergence of new business models augurs well for the entire value chain, not just hospitals.

“One such model entails a volume-driven approach where hospitals expand into Tier-II and -III cities and provide affordable treatment.

“That will reduce the geographical skew in quality healthcare,” said Binaifer Jehani, director at CRISIL Research, in a recent article.

Overall, there are 23,582 government hospitals, with 710,761 beds, in the country at present. This may be a woefully low number when compared with the number of beneficiaries entitled to health services under AB-NHPM.

To address this, the government had in its Budget for 2018-19 committed Rs 1,200 crore to strengthening the existing physical health infrastructure for primary and secondary care.

Further, CRISIL estimates that the central government will need at least Rs 6,500 crore per year for premium payments under AB-NHPM.

According to reports, the government will spend Rs 5,000 crore this year to scale up the AB-NHPM scheme; once it is implemented across the country next year, the annual cost to the exchequer is estimated to be Rs 10,000 crore.

During his speech, Khuntia said that under the AB-NHPM scheme, scheduled to be launched by the prime minister next week, the regulator will work with health insurance companies under a public-private partnership (PPP) model.

S Prakash, chief operations officer at Star Health and Allied Insurance Company, told Business Standard: “The regulator wants to ensure that there is standardised information coming from different insurance companies so that customers are not taken by surprise while filing claims.”

“This is in the best interest of policyholders. At present, state governments cannot handle the patient load under AB-NHPM solely using government hospitals.

“So, there is a need for using the infrastructure and expertise available with private hospitals, so the regulator is seeking a PPP model,” said Prakash.

Insurance executives that Business Standard spoke to said they will not need a final regulatory approval from IRDAI once a company wins the tender contract for providing health insurance coverage to recipients under AB-NHPM.

They say, under the trust-model, the health insurance policy will be provided and accounted for like group mediclaim policies.

Health insurers offer companies and societies customised policies to benefit all those eligible in a group based on their needs.

“IRDAI has all the right to ask for the assumptions a company makes when participating in bids during the AB-NHPM tender process and insurance companies would need to submit the actuarial workings to them to justify the price “ said Jacob.

Unlike in the case of regular retail products where the company applies for the regulators approval, in group mediclaim policies  like AB-NHPM the regulator is simply informed of the company’s actuarial calculations.

“They can always query the insurance company’s calculations and seek clarifications,” he said.

Apollo Munich has won the tender for providing insurance covers to beneficiaries in Nagaland.

The company banked on its 3-year experience in the state with the RSBY scheme and has hired personnel to flag-off the scheme in the next few weeks.

The IT management system for running AB-NHPM in Nagaland will be made operational in the next 10 days, Jacob said.

However, the Group Mediclaim policy for AB-NHPM will continue through the life of the beneficiary, as long as her annual income and socio-economic status remain unchanged.

Datta says the learnings from the scheme will definitely begin to influence and change the company’s processes over time.

“As the ecosystem changes, we will adopt some parts.”

“Given that both the regulator and the government want to improve health insurance penetration, the government might over time come out with subsidies for regular customers not eligible under the scheme under different categories, such as self-employed or government employees,” said Prakash.

As many as 28 states have joined the AB-NHPM scheme, with around 23 of them opting for a trust model.

Total expenditure on health-care is at 1.25 per cent of GDP

60:40 funding split between the Central Government and State Governments

Package rates for 1,350 treatments and surgical procedures have been fixed by National Health Agency

The vastly misunderstood condition of gluttony

The lockdown: Paranoia is growing by the hour

Central team visit: no projections shared with us, says BMC

DIY skincare: A homemade body lotion to take care of your many problems