The Uttar Pradesh government has notified that 22 out of 70 municipal wards in Mathura-Vrindavan are "pavitra teerth sthal (holy pilgrimage sites)", effectively banning the sale of non-vegetarian food and liquor there. 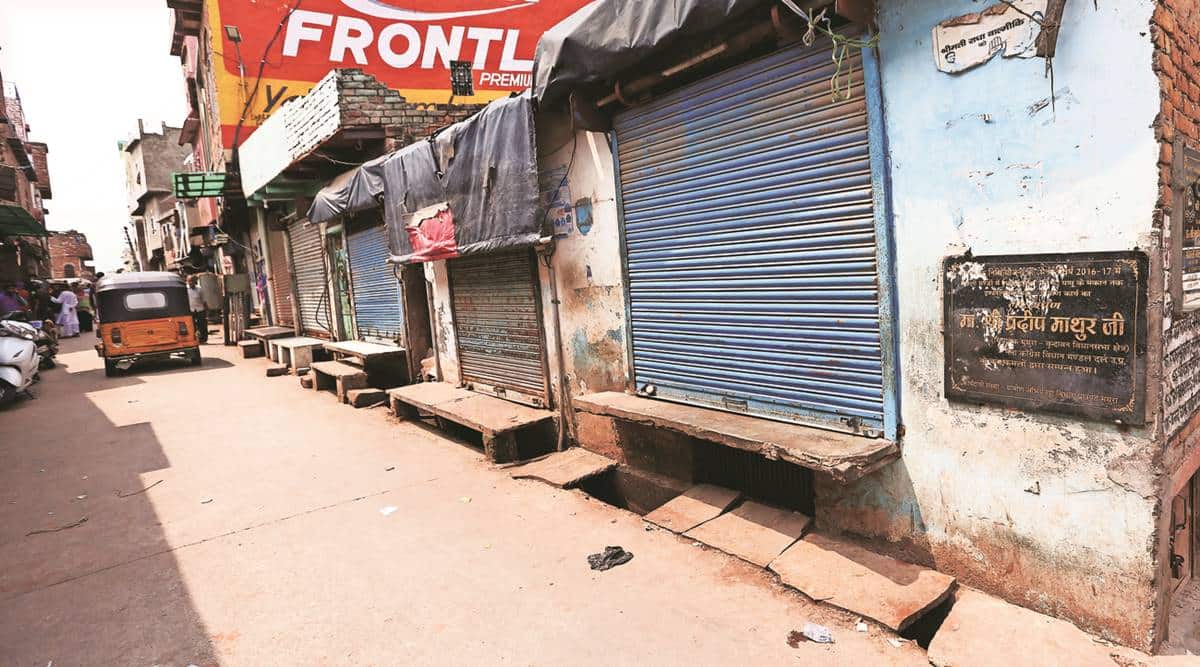 The District Magistrate’s Office has officials shuffling in and out with hastily drawn maps, the outlines hazy. “We are trying to figure out which areas, markets and shops will be covered under the ambit of the notification. Ek hafte mein picture clear hone ki sambhavna hai (There should be some clarity in a week),” says Additional District Magistrate (Finance and Revenue) Yoganand Pandey.

It’s a day after the Uttar Pradesh government notified 22 out of 70 municipal wards in Mathura-Vrindavan as “pavitra teerth sthal (holy pilgrimage sites)”, effectively banning the sale of non-vegetarian food and liquor here.

The chatter inside the city, at mohallas inhabited largely by Muslims and Dalits, also reflects the confusion and uncertainty, with residents trying to locate themselves on the municipal map in Mathura’s dense sprawl of interlocking by-lanes, housing over 4 lakh people.

“Today everyone is trying to find out their (municipal) ward number. It didn’t really matter before,” says Naushad Alam, who owns a poultry shop in the Muslim-dominated Bharatpur ward.

Some lines though are already firmly drawn. “A large contingent of policemen arrived last evening itself and ordered that the market be shut and the signboards be taken down. We had no option…”, says Alam.

On Saturday, the meat traders held a meeting to discuss the government notification. Shakir Hussain, the owner of Majeed restaurant in Bharatpur who was part of the meeting, says, “The order violates Articles 19 and 21 (freedom of expression, life and personal liberty) of the Constitution. The UP government had tried to enforce a ban on meat even in 2017 under the guise of cracking down on slaughterhouses. But the Allahabad High Court had reminded it that it shouldn’t try doing anything that would violate fundamental rights.”

Bharatpur’s fish and poultry market, catering to locals as well as several large and small hotels, is usually a bustling place, drawing customers from places such as Lakshminagar near the Yamuna Expressway, falling outside the Mathura municipal limits.

SDM Ajay Kumar Singh says around 15 of the 38 licensed meat shops in Mathura are located in the Bharatpur area.

Among those who fear the fallout of the government notification is Raj Kumar, the owner of ‘Delhi Chicken Shop’ in Lakshminagar, who sources his supplies from Bharatpur, as well as Khatik Mohalla, a Dalit-dominated colony in Mathura’s Dampier Nagar.

“Kya hai ye Hindu-Muslim, Hindu-Muslim (What is this Hindu-Muslim)? I started this shop with my business partner Shah Rukh. I source my chicken from a Muslim-run market. My shop has Hindu workers. They say the ban will only affect a small number of people. That is simply not true, such is the way these businesses are linked,” Kumar says.

One of the employees at Bharatpur’s Majeed restaurant, Yogendra Kumar, 21, who hails from neighbouring Fatehpur Sikri, says, “I cleared ITI, specializing in electronics repairing. After that I worked with a manufacturing unit at Palwal (Haryana), which didn’t pay much. Around seven months ago, I moved here and earn Rs 12,000 per month. I have elderly parents and young sisters to take care of. Where do I go now?”

The ripples will spread to other businesses which might have escaped government calculation, says Deepak Aggarwal, who supplies flour to hotels. “Over half my revenue comes from hotels serving non-veg food,” he says.

While Chief Minister Yogi Adityanath has said a plan will be drawn up to rehabilitate the affected traders, district officials admit it is not even on the table so far.

As for the CM’s suggestion that the traders shift to sale of milk, the latter scoff at its “impracticality”. “This makes no sense. These businesses took shape over generations. Milk cannot ever match up to that. Moreover, where is the demand going to come from? This is targeted towards one community,” says Hussain, the owner of Majeed.

He also points out, “The slaughterhouse at Manoharpura was shut down in 1998 with the promise of alternative jobs for butchers. That never happened.”

A meat trader at the Khatik Mohalla, who wants to be identified only by his surname Sonkar and calls himself a non-believer who follows the teachings of Babasaheb Ambedkar, says Dalits like him will also be hit, while questioning the logic of the move.

“The price of chicken would not have become Rs 200 per kilo had only Dalits been the consumers. Thakurs, Baniyas, Brahmins, sab aate hain (they all come). And moreover, they are disregarding science in the name of faith. Why are references on meat being a good source of nutrition not dropped from textbooks then?” he says.

According to other traders too, at both Bharatpur and Khatik Mohalla, their customers are overwhelmingly Hindus. As per the 2011 Census, Hindus make up around 81% of the population of Mathura city, while Muslims are at 17%.

Many traders also question the rationale of the mapping exercise. “It is almost as if faith ceases to exist after a 2.5 km radius around the temple complex. They did not even let us empty our stocks,” says a trader.

In Uttar Pradesh, ban orders like Mathura’s are in force from earlier in parts of Ayodhya, Chitrakoot, Deoband, Dewa Sharif, Misrikh-Naimisharanya, and the area around the Kashi Vishwanath temple in Varanasi. In Uttarakhand, the ban is effective in the entire Haridwar district.

ADM Pandey and SDM Singh admit they are trying to figure out how much area will come under the ambit of the notification in Mathura-Vrindavan. “The civic body has been directed to chart the mohallas that come under the 22 selected wards. The exercise will take some time as there are mohallas with some parts under the demarcated wards, some outside,” Pandey says.

Unlike the meat shops, the liquor outlets in the identified wards were open as of Saturday. Excise officer Prabhat Chandra said around 45-50 of the 658 liquor shops in Mathura will close in the next few days. The district’s earnings from excise duty and license fees was over Rs 400 crore in the last financial year.

Among those who supports the BJP government’s move is Anjani Kumar, an employee at one of the liquor shops. “Faith should not be subjected to unnecessary arguments,” Kumar says. “It’s not as if a blanket ban has been imposed on meat trade. It impacts a very small area. Yogi baba (the CM) ne sahi nirnay liya (has taken the right decision).”

Three grounded B737 freighter planes back in operation: SpiceJet

Tamannah Bhatia about how award shows are manipulated

Poor relationship with family bad for your health. Here’s why