Pazhoor village in Kozhikode had got used to containment, with Covid lurking here like the rest of Kerala. Then came Nipah, and the return of uncertainty. 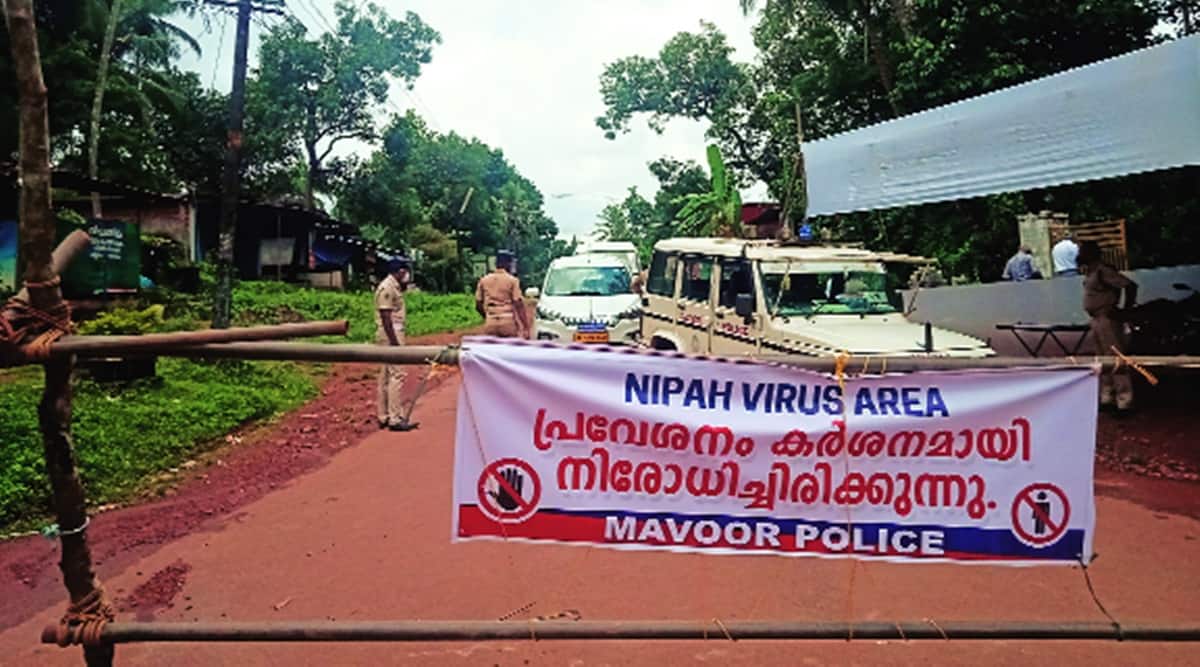 An eerie silence prevails in Pazhoor under Chathamangalam panchayat in Kozhikode district, the village of the 12-year-old boy who died of Nipah infection on September 5. There are no vehicles or people on the road, except a few policemen and volunteers deployed to ensure compliance of new containment rules.

A total of 274 people, 149 of them health workers, are believed to have been exposed to the Nipah victim, or his family. Eighty-eight people, out of 94 who are symptomatic, have tested negative. Chathamangalam panchayat president Abdul Gafoor says 18 people from 12 houses are in isolation at the panchayat.

But the low numbers so far haven’t lessened the fear, or the vigil of the state government, which is already struggling to contain Covid. Kerala has recorded among the highest daily Covid cases for two months now.

A zoonotic disease, which spreads from animals to humans, Nipah has a fatality rate of a high 75%. When Kerala last saw an outbreak, in 2018 (also in Kozhikode), 17 people had died — 90% of those infected. The symptoms start with mild fever and headache, but within four days to a week, can lead to encephalitis (brain inflammation) and death. There is no vaccine or medicine, only supportive therapy.

“We woke up that day (September 5) to see all the roads to the village barricaded. Then before we could even realise the danger, we heard the news that the boy who was infected had died,” says K Reena, waiting at a police barricade for a volunteer to get her provisions from the few shops open on the other side.

Villagers are forbidden from crossing the barricades, with pickets manning all entry points to Chathamangalam now. The mandatory quarantine period prescribed by the Health Department for those exposed to a Nipah victim is 21 days. Mobile patrolling teams ensure people follow the rules. Three ambulances are parked at the panchayat for ferrying patients to hospitals. The only movement allowed is for Covid treatment — the panchayat, which currently has 415 active cases, has seen 4,549 cases so far and 45 deaths.

Posters about Covid-19 protocol put up on walls and notice boards are now covered with messages regarding Nipah.

Muhammed Anas, an expatriate, comments on the irony. “We thought we had only Covid-19 to grapple with. And nobody was bothered about it. Although the village was a containment zone, everyone moved around freely. But Nipah is different, people are scared. Everyone is aware of the risk,” he says.

The village has several expatriates like him, mostly in the Gulf, while others work as daily labourers in the construction sector, or as farmers. A small chunk are salaried employees.

The Chathamangalam panchayat comprises largely concrete houses, with tarred roads connecting them, interspersed by paddy fields, banana and betel nut (areca) trees. It is the fruit trees, which attract the fruit bats that are a reservoir of the Nipah virus, that have the health officials on their toes. A team of health workers has been going house to house conducting a survey to ascertain any cases of fever or unusual deaths in the past week. There are 13,000-odd houses in the panchayat, with a population of around 55,000.

Gafoor says, “There have been a few fever cases, but we could not find any suspicious deaths. People are fully cooperating with the restrictions. We are distributing free food kits to houses in the containment zone.”

At Chittariplackal junction near Pazhoor, junior health nurse M Anju presses the doorbell at a home. Shobana replies through a window to the questions Anju asks from a survey form. “Are you growing any fruit trees?” Anju asks. Shobana says no.

As she walks over to the next house, Anju says most houses in the locality have some kind of fruit tree on their premises. “Fruit bats thrive in these trees, particularly guava. Also, areca nuts are raided by bats.” This time of the year, the areca trees are loaded with ripe nuts.

Anju uploads the data she has collected into a Google sheet on her smartphone. “We have to put up the data online so that those in the control room can analyse it,” she says.

Given the scare around fruit bats, the sale of fruits has come to almost a total halt. “Nobody is buying fruits, particularly locally grown bananas, rambutans and pineapples. People fear these fruits are exposed to the fluids of fruit bats,” says trader Shinil Prasad at Nayarkuzhi, another junction at Chathamangalam, who fears the apprehension won’t ease soon.

A local social worker and volunteer, Gireesh M, says people are living in uncertainty. “Nobody knows how long we should remain indoors. Many daily workers are also at home, at the risk of losing work. Already Covid-19 restrictions have been in place in the village for nearly two weeks. Everyone is waiting for the day they can move about,” he says.

Karimnagar’s IT Tower ready for inauguration

Patriotism to the fore

Shut out for 9 months, fans back at top-level English football