The Biden administration expects the Modi government to continue to remain as its loyal camp follower even as Washington continues to act in self-interests, observes Ambassador M K Bhadrakumar, who played a stellar role in beginning India’s dealings in Afghanistan in 1994.

US National Security Advisor Jake Sullivan discussed on Sunday in an interview on CBS’s Face the Nation the evolving relationship between Washington and the Afghan Taliban. Three things emerge:

First, Sullivan disclosed that ‘over-the-horizon strikes‘ against the ISIS-K from outside Afghanistan will continue but he ruled out any return to combat missions.

Second, Sullivan claimed that after the complete withdrawal of US troops from Afghanistan on August 31st, ‘We will make sure there is safe passage for any American citizen, any legal permanent resident’ as well as those Afghans who had served US interests.

The Taliban, he said, ‘have both communicated privately and publicly that they will allow for safe passage” and Washington has the leverage to make sure that they “follow through on those commitments.’

Third, most important, while the US embassy in Kabul remains closed from September 1, ‘We will have means and mechanisms of having diplomats on the ground there (in Kabul), be able to continue to process out these applicants, be able to facilitate the passage of other people who want to leave Afghanistan.’

‘And over time, depending on what the Taliban does, how it follows through on its commitments with respect to safe passage, how it deals with the treatment of women, how it deals with its international commitments not to allow Afghanistan to become a base for terrorism in the rest of the world, we can make further determinations about both diplomatic presence and other issues as we go.’

‘But the onus will be on the Taliban to prove out its commitments and its willingness to abide by the obligations that — that it has undertaken and that are imposed upon it by international law.’

In sum, the US appears to have negotiated a package deal with the Taliban where the logical conclusion in a conceivable future will be the reopening of the American embassy in Kabul.

A lengthy dispatch by the Voice of America on Sunday with a Kabul/Islamabad dateline, based on a briefing by a ‘senior Taliban leader … on condition of anonymity’, reported that the new Taliban government is ‘in the final stages’ of being announced.

It seems certain that the announcement could come as early as next week.

The government is sure to include all the members of its current Rahbari Shura, or leadership council of the Taliban but the cabinet could have more than 26 members all in all.

Interestingly, the VOA reported, ‘In their internal consultations, the Taliban were also discussing the possibility of making either Sirajuddin Haqqani or Mullah Yaqoob (Mullah Omar’s eldest son) the Raees ul Wazara, a position equivalent to a prime minister’ — and, ‘If Haqqani becomes prime minister, Yaqoob could be defence minister, since he currently heads the military commission of Taliban.’

The salience lies in the acceptance of the Taliban government as a compelling reality by Washington.

Rhetoric aside, the US is already engaged with the Taliban in a constructive spirit.

The US’s major allies, Germany and France, are also doing the same.

Simply put, the ostracisation of the Taliban government is no longer an option — except in the highly unlikely event of the Taliban resiling from its commitments under the package deal.

From the Taliban’s point of view, this is an eminently satisfactory deal.

The Taliban has a consistent record of keeping its commitments to the Americans.

Even after the Doha Pact of February 2020 began unravelling, the Taliban kept its word on the single most important assurance under the agreement — namely, that it would not attack US forces.

And it did keep its word even in the face of all those ferocious air strikes by the US in recent months contrary to its assurance to the Taliban.

Meanwhile, the winds of change are also blowing through the horseshoe table of the UN Security Council.

Interestingly, the UNSC statement of August 27 condemning the terror attacks in Kabul delisted the Taliban for the first time from the Afghan groups supporting terrorists, and merely said that ‘No Afghan group or individual should support terrorists operating on the territory of any other country’. 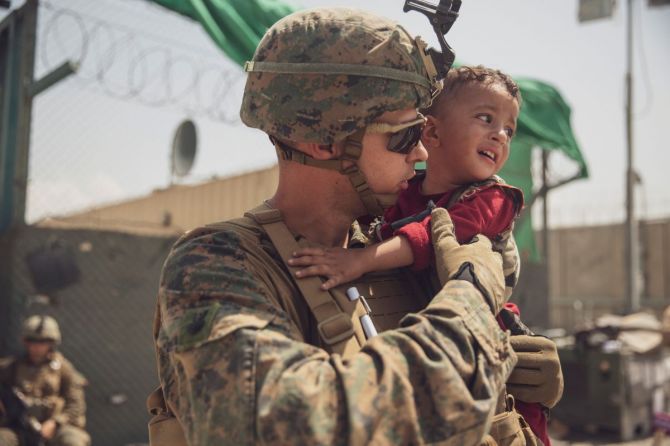 In fact, a day after the Taliban swept to power in the country, the UNSC had said on August 16: ‘The members of the Security Council reaffirmed the importance of combating terrorism in Afghanistan to ensure the territory of Afghanistan should not be used to threaten or attack any country, and that neither the Taliban nor any other Afghan group or individual should support terrorists operating on the territory of any other country.’

Yet, just 11 days later, on last Friday, there is no more any reference to the Taliban as a terrorist group!

Clearly, the US’s new thinking towards the Taliban as a constructive, cooperative interlocutor is rubbing on the UNSC.

This is realism with capital ‘R’.

The pathway has to open sooner rather than later to remove the UN sanctions against Taliban leaders.

All this must be a bitter pill for the Modi government to swallow, when India also happens to be holding the rotating UNSC presidency through this month.

Presumably, to mollify India’s sense of humiliation and defeat in the entire Afghan saga, US Secretary of State Antony J Blinken had a call with External Affairs Minister Subrahmanyam Jaishankar on Saturday.

The US state department readout said the two ministers ‘discussed a broad range of shared priorities, including continued coordination on Afghanistan and in the United Nations… (and) agreed to remain closely coordinated on shared goals and priorities to deepen the US-India partnership.’

Diplomatese aside, the Biden administration expects the Modi government to continue to remain as its loyal camp follower even as Washington continues to act in self-interests.

Prime Minister Modi’s recent prophesy that the Taliban has no future failed to make any impression on the Biden White House.

Ambassador M K Bhadrakumar, who headed the Pakistan-Iran-Afghanistan desk at the ministry of external affairs in the 1990s, served the Indian Foreign Service for 29 years.

The meat in AAP’s sandwich politics

IPL 2021 Players Auction Live Streaming: When, Where and How to watch Live TV Coverage of IPL auction