Arrested on the midnight of March 13, 2010, from Anand by the Anti-Terrorism Squad (ATS), Bashir Ahmad alias Ejaz Ghulamnabi Baba returned to his family on June 22. 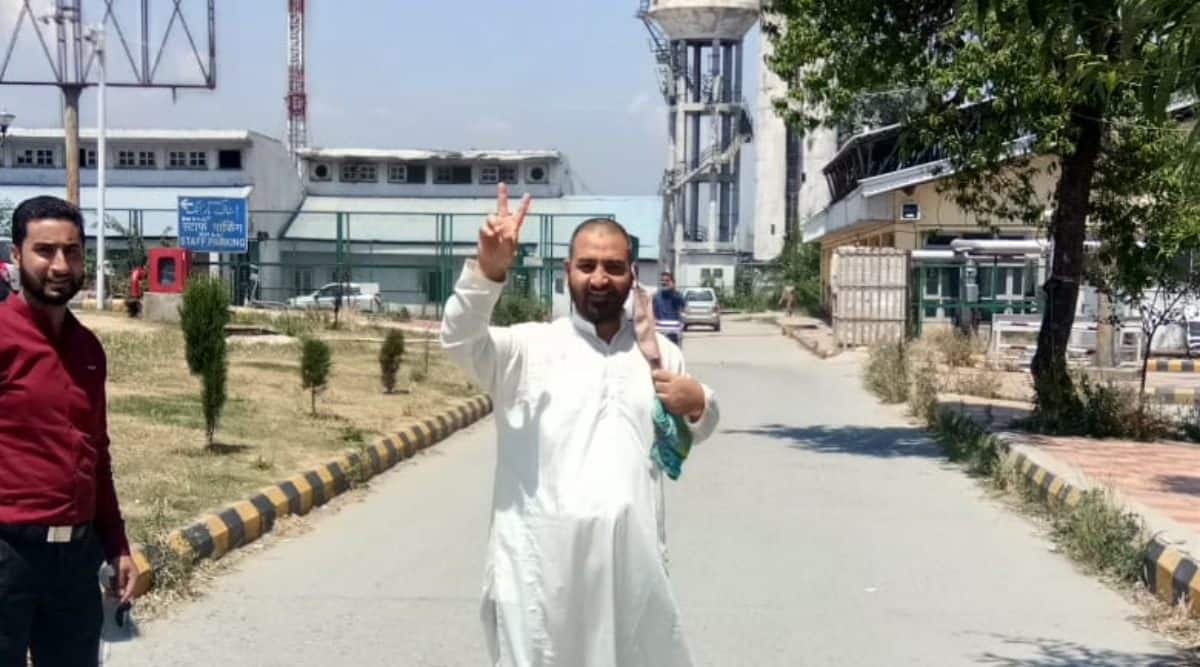 WHILE acquitting a 43-year-old Srinagar resident of UAPA charges on June 19, 11 years after he had been arrested, a Sessions Court in Anand said the prosecution had not produced any evidence to link him to terror acts and gone more by “emotion” than evidence. “No individual can be declared guilty simply on basis of (spreading) social fear, anarchy, panic and concern for society,” it said.

Arrested on the midnight of March 13, 2010, from Anand by the Anti-Terrorism Squad (ATS), Bashir Ahmad alias Ejaz Ghulamnabi Baba returned to his family on June 22.

The court of Fourth Additional District and Sessions Judge S A Nakum held that the prosecution had “failed to prove beyond doubt that the accused had done some terror act, if he was connected to a terrorist organisation and if he has tried raising funds for terrorist acts” .

The court said testimonies of witnesses did not stand, forensics did not support the police case and held that Ahmad’s “confession” was not admissible as evidence.

Ahmad was accused of conducting recces in Gujarat to establish a terror network and to recruit Muslim youth affected by the 2002 riots for the Hizbul Mujahideen. The ATS claimed Ahmad had been in constant touch with his Hizbul handlers, including Pakistan-based ‘commander’ Syed Salahuddin and Bilal Ahmad Shera, and Gulam Rasool Mohammad Ismail Khan of Anand, who continue to be listed as ‘absconders’.

Ahmad was booked under IPC Section 120 (B) (conspiracy); apart from several sections dealing with terror charges under the UAPA.

“There is more emotion in the arguments by the learned government lawyer. However in criminal jurisprudence, the complainant side has to prove its case without doubt,” the court held. “Nothing has emerged to show that the accused was involved in any kind of terrorist organisation” or that “the accused sent Gujarat’s Muslim youths to train in terror activities”, it said.

A resident of Rainwari, Srinagar, Ahmad worked as a ‘camp assistant’ at the Kimaya Cleft Centre in Srinagar, an NGO working with children with cleft lips. He had come to Ahmedabad for training with the Cleft and Craniofacial Research Institute (CCRI).

Police claimed to have found on his person visiting cards of the Maya Foundation (the NGO he worked with), an email address, a Pakistan-based phone number, a name “Bilal” scribbled on a paper, a diary with names of places in Ahmedabad written, like Handloom Shop, Law Garden, Akshardham temple, Jama Masjid, and ‘ISI’.

A key witness, Manish Jain, the project development executive at the CCRI, implied that Ahmad did not seem very interested in the training, saying he would often go to a hotel for non-veg food and for sight-seeing.

However, the court noted, “It was very natural for the accused who had come from the faraway state of Jammu & Kashmir to go to a museum in his free time after attending the camp and to go out during recess to have non-veg food and there is nothing inappropriate in this . Just by these facts it cannot be said that the accused was more interested in terror activities and not in the training.”

Another key witness, Dr Anand Vijayraj Someri, in whose flat Ahmad stayed, said he often used his phone to speak to people in Pakistan and Dubai. The ATS said Someri had also received a call on his phone from a Pakistan number, in which he learnt that Ahmad was called ‘Basheer Baba’.

However, during cross-examination, Someri admitted he “could not understand the conversation Ahmad had on the phone calls to Pakistan due to language barrier”.

Criticising the police investigation, the court said it had not found any information to show where the accused was after February 28, when he was booked on a train to return to Srinagar after the camp ended, till March 13, when he was arrested.

While police claimed that at the time of his “confession”, Ahmad was not in their custody, the court noted that police witness Hitendrasinh Jadeja had said Ahmad was caught, frisked and then interrogated. Hence, the judge said, “… technically or in an indirect manner he (Ahmad) was detained and interrogated and this account has been presented in the complaint as a confession. And therefore this cannot be considered as evidence under the provisions of Sections 25 and 26 (of the Indian Evidence Act)”.

The ATS included an FIR lodged against Ahmad at Srinagar’s Karannagar police station in 2008 under the Explosives Substance Act as evidence to claim he was associated with the Hizbul Mujahideen. The ‘crime writer’ at the police station said the abbreviation ‘HM’ used in the FIR was for the banned organisation.

However, the court observed, “It cannot be said that the accused is associated with Hizbul Mujahideen and involved in terrorist activities simply on basis of the fact that the FIR uses the words HM.” It added that it was an established principle of law that “till a person has been proven guilty of a crime beyond doubt, that person is innocent… and it cannot be said that the accused has a criminal history just because he is facing a case and a chargesheet”.

It also pointed out that as per the deposition of Hitesh Sanghvi, the Deputy Director of the Directorate of Forensic Science in Gandhinagar, who had examined the laptop and mobile phones purportedly used by Ahmad, “no messages, literature that could be called a terrorist act, were exchanged by email or any Internet medium with anybody”.

However, the court dismissed the defence claim that Ahmad was in ATS custody before March 14 and had been “framed”, saying “there was nothing on record to prove (this)”.

‘Congress has conceded defeat, looks for ways to save naamdaar’: PM Modi