In his most blistering attack on Donald Trump, former United States president Barack Obama has accused his successor of treating the presidency like a “reality show” and said the top Republican leader “hasn’t grown into the job because he can’t”.

Obama, the country’s first Black president, spoke on the third night of the virtual Democratic National Convention on Wednesday just before Senator Kamala Harris of California became the first Black person to be formally nominated for vice-president by a major party.

Obama said that both Biden and Harris have the experience needed to get things done and they have concrete policies that will turn their vision of a better, fairer, stronger country into reality.

But he had some very harsh words for President Trump who is seeking re-election in the November 3 presidential polls.

“I have sat in the Oval Office with both of the men who are running for president. I never expected that my successor would embrace my vision or continue my policies,” Obama said.

Obama said that he had hoped that Trump might “show some interest in taking the job seriously. But he never did”.

“I did hope, for the sake of our country, that Donald Trump might show some interest in taking the job seriously; that he might come to feel the weight of the office and discover some reverence for the democracy that had been placed in his care,” Obama said in an unusually strong criticism of Trump during his remarks.

“For close to four years now, he’s shown no interest in putting in the work; no interest in finding common ground; no interest in using the awesome power of his office to help anyone but himself and his friends; no interest in treating the presidency as anything but one more reality show that he can use to get the attention he craves.

“Donald Trump hasn’t grown into the job because he can’t,” Obama said, giving his address from Philadelphia, where the US Constitution was drafted and signed. 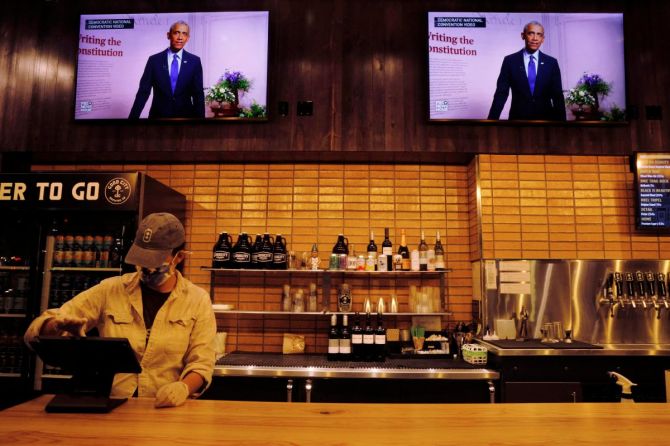 The former president said one expects a president to be the “custodian” of American democracy and one who, regardless of ego, ambition or political beliefs, will preserve, protect and defend the freedoms and ideals that so many Americans marched for, went to jail for, fought for and died for.

Obama said the consequences of Trump’s failure as President have been severe with more 170,000 Americans died due to the coronavirus and loss of millions of jobs while those at the top have raked in more wealth.

“Our worst impulses unleashed, our proud reputation around the world badly diminished, and our democratic institutions threatened like never before,” Obama said.

In calling on Americans to vote for Biden as the next President and Harris as Vice President, Obama said for the eight years of his presidency, Biden was the “last one in the room whenever I faced a big decision. He made me a better president, and he’s got the character and the experience to make us a better country.”

Describing Harris as his friend, Obama said she is an “ideal partner” for Biden and is “more than prepared for the job; someone who knows what it’s like to overcome barriers and who’s made a career fighting to help others live out their own American dream”.

He said both Biden and Harris have the experience needed to get things done and they have concrete policies that will turn their vision of a better, fairer, stronger country into reality.

“They’ll get this pandemic under control like Joe did when he helped me manage H1N1 and prevent an Ebola outbreak from reaching our shores,” he said, adding that they would expand health care to more Americans, rescue the economy and will restore America’s standing in the world.

“Joe and Kamala will restore our standing in the world and as we’ve learned from this pandemic, that matters. Joe knows the world, and the world knows him. He knows that our true strength comes from setting an example the world wants to follow.

“A nation that stands with democracy, not dictators. A nation that can inspire and mobilize others to overcome threats like climate change, terrorism, poverty, and disease,” he said.

Hillary Clinton has said that Senator Kamala Harris, the daughter of Jamaican and Indian immigrants, is the “right partner” for Joe Biden as the Democratic Party’s vice presidential nominee, as she urged Americans to vote for the duo to “pull our nation back from the brink.”

Addressing the virtual Democratic National Convention, the former secretary of state, who in 2016 challenged Donald Trump, urged voters not to take the Republican president’s political standing for granted this year, warning that November cannot be a “woulda coulda shoulda” election.

The Democrats have nominated former vice president Biden, 77, as the presidential candidate and Harris, 55, as his running mate in the November 3 presidential election.

“This is the team to pull our nation back from the brink,” she said.

“And Joe picked the right partner in Kamala. She is relentless in the pursuit of justice and equity and she is kind,” Clinton said.

Comicstaan 2 winner Samay Raina: It was strategy to save my best for the last

‘We don’t discriminate against women’