The party has chosen a green and white flag with a symbol of a pigeon in the middle, which it claims was kept to signify peace and sacrifice. 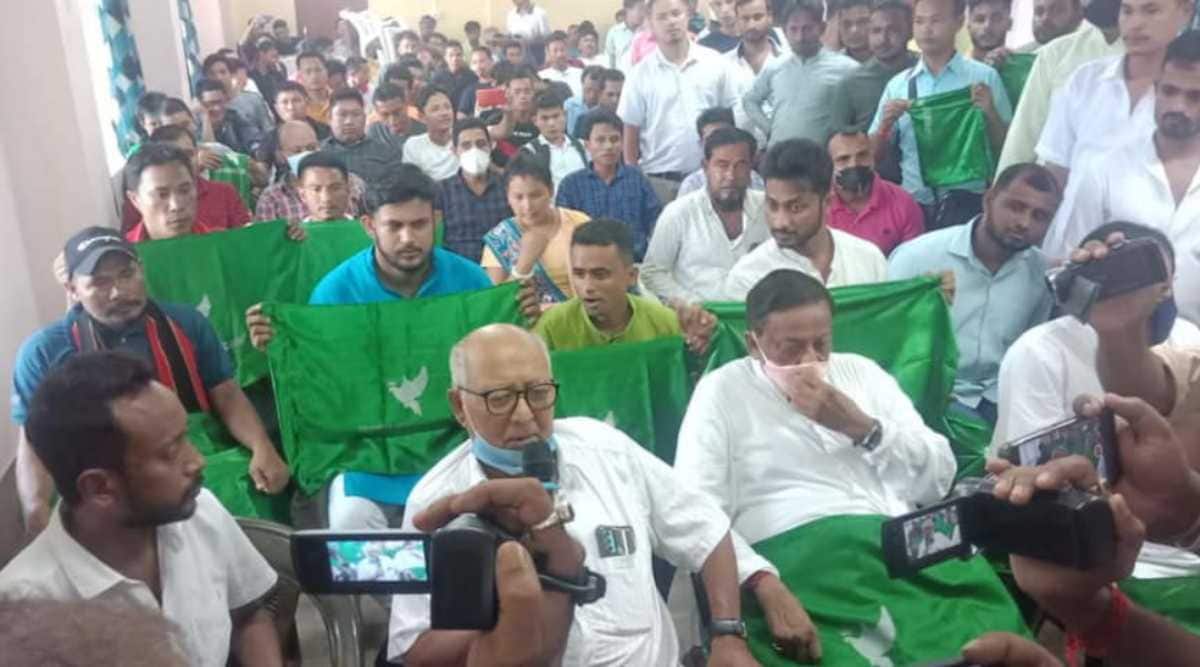 A battery of Congress leaders, mostly youth leaders, who quit the party a fortnight back, floated a new political party — Tripura Democratic Front (TDF) — Thursday. The party has been formed on Gandhian principles, the leaders said and is headed by former state Youth Congress president Pujan Biswas.

Speaking to the media, 36-year-old Biswas said, “While we are a youth force, seniors are with us to advise and guide us. We shall proceed and take decisions with their advice and opinion. We will work to save democracy, promote cultural aspects of all communities of Tripura unitedly in the hills and plains together.”

The party has chosen a green and white flag with a symbol of a pigeon in the middle, which Biswas claims was kept to signify peace and sacrifice.

“We have formed this party on the ideals of Mahatma Gandhi, with full confidence of the Indian Constitution. We aim to protect the rights of tribals and non-tribals alike. We believe we can strengthen the ethnic unity and peace and shall form a democratic government with support from the people in the next assembly election,” Kanti said.

He also said democracy is in crisis under the BJP rule, unemployment, attacks on rights of tribals are on the rise and said TDF would focus on unity and brotherhood.

Former Congress vice-president Tapas Dey said, “We had joined Congress to serve the people but the party has turned into a business concern or an asset making machine for some people. Congress has sold itself from Delhi to Agartala. Many like us have left Congress after being involved with it for five to six decades. We appeal to those still standing with Congress to realise where the party has gone.”

“We trusted the Congress leadership at Delhi. But every time our goals were hampered by AICC. The belief and commitment I have cannot be fulfilled in Congress,” Dey said, adding, there is a “conspiracy” in Tripura Congress.

“AICC will never allow Congress to stand in Tripura. Everyone has asked me not to return to Congress. So, we have formed this party today based on Gandhian principles and with confidence on the Indian Constitution,” he said.

Reacting to the allegations of TDF leaders, state Congress president Birajit Sinha said, “We don’t want to give them importance. The baap-beta (Pijush Kanti Biswas and Pujan Biswas) were given charge of the party for the last 18 months or so and they have done tremendous damage to the party in this time.”

The Congress leaders had quit the party purportedly over differences on the All India Congress Committee’s (AICC) decision to disregard the previous leadership’s organisational concerns and choose former MLA Birajit Sinha as the state unit’s president. Former state Congress Pijush Kanti Biswas, who offered to resign alleging non-cooperation from his colleagues in Congress last month, was replaced by former Sinha on September 24.

Two days later, over 35 office bearers of the Youth Congress resigned citing differences with the AICC’s choice and said during Sinha’s last term as Pradesh Congress chief, six Congress MLAs left the party along with party activists and joined Trinamool Congress, later further moving to BJP, which dipped Congress’s vote share below 2 per cent in the 2018 assembly polls.

Among them, while Baptu recently joined Trinamool Congress, the rest formed TDF and said they wish to put up a united fight to save democracy and promote ethnic and communal unity.