‘The roadmap ahead seems very difficult especially in the rural areas where there is very poor infrastructure, vaccine reach and hesitancy.’
‘These are a deadly cocktail for the next wave.’

Unlike the first covid wave which spared the rural parts of India, the second wave ravaged the villages of India.

‘Around 65% of Indians out of the total population of approximately 1.3 billion live in rural India which hardly has rural health infrastructure. As per the Rural Health Statistics 2019, there is a shortfall of 43,736 Sub Centres (23 per cent), 8764 Primary Health Centres/PHC (28 per cent) and 2865 Community Health Centres/CHC (37 per cent) across the country.”

“The next wave might have a greater epicentre in the rural areas,” Amitabh Behar, CEO, Oxfam India, tells Shobha Warrier/Rediff.com.

You are visited the villages in Chhattisgarh. How badly affected are the villages of north India after the second wave?

The first wave did not impact the rural areas massively. But this time, it has been very bad.

We work intensely in six states like UP, Bihar, Chhattisgarh, Jharkhand, Orissa and Assam.

Then, we have a presence in another 6-8 states and we have been getting data from across the country, from Kerala to Assam to Himachal Pradesh.

It says the rural areas were hit very badly this time in multiple ways.

We have found that there is still a lack of awareness about the pandemic, and people did not know what was happening to them.

The doctors have no way of getting people tested which was a huge bottleneck.

Because there is no testing, the doctors could not advice people to quarantine at home if it is a mild case of covid. There were no public health centres too…

Yes, there were many who needed medical facilities, but that was not available in these villages.

In fact, not just in villages, even in semi-urban areas and district towns too.

So, it was just not possible for people to get admitted in the hospitals.

There was a huge faultline in the entire health system which got massively magnified during the second wave.

The rest of India has not come to know about the real picture from rural India.

Absolutely. Vaccination has not happened in rural India. There is much more vaccine hesitancy there because of a lack of awareness.

In Chhattisgarh, I heard people saying, they would not want the vaccine as somebody somewhere died after taking the vaccine.

Also, there is real fear in the rural areas about the pandemic.

Was it because many people died of the pandemic there?

Yes. They saw death at close quarters unlike in the first wave when they only heard about it. Yes. One thing we have to say, the number of deaths that we hear about is not because of the virus but because of the poor health infrastructure. So, it is certainly a disaster for health.

It is also a disaster in terms of the economic conditions of the poor.

The APU study finds that 20 crores (200 million) people have slid into poverty in the last year.

The Centre for Monitoring Indian Economy study says that over 10 million Indians lost their jobs in the second Covid wave, and around 97% of household incomes have fallen since the start of the pandemic last year.

That’s why it is a double disaster.

Your report also says that those who slipped into poverty last year are facing hunger now.

Those were early reports. We were more worried in early May.

That’s why our report says, ‘Millions who slipped into poverty last year due to job losses are now facing another looming crisis: hunger. India already has the largest population facing food shortages in the world, with an estimated 189 million people in India already undernourished before the pandemic began’.

Last year around 100 million migrant workers went back to their villages and most of them had not gone back to work. Did that not make the economic situation worse?

Yes. The entire devastation that happened to the economic system is massive. We still have only the macro numbers.

We work with the marginalised community like the sex workers, transgender people, etc and we found that they were getting further marginalised because of the economic devastation. Early this year, you published a report calling the covid virus, the inequality virus. We are hearing more stories from all over the world about the birth of more billionaires …

The Oxfam came out with a report a month ago that stated that the world created 9 new vaccine billionaires.

Along with that, we see vaccine inequality with the UK, the US, Canada and Europe cornering 3-5 times more than the vaccine needed by them.

Canada has five times more than vaccines needed for their population.

On the other hand, in most of the African countries, vaccination has not touched even 1%. In India also, it is just around 4%.

Do you think vaccines are not reaching the rural population?

In India, we have this vaccine shortage, and nobody really knows from where they are going to produce 200 crore (2 billion) vaccine doses by December. There is no transparency about how it will happen.

We had created a complete mess with the vaccine policy asking states to procure vaccine on their own.

Why would the Bombay Municipal Corporation call for a tender for vaccines? This has not happened anywhere in the world. And, we have this national immunisation policy in which all our immunisation programmes are done by the central government. While this is a bigger exercise and still it was given to the states.

Fortunately, the government has now reversed an absolutely bizarre policy. Thank God, we have come out of that fumbling policy.

But the roadmap ahead still seems very difficult especially in the rural areas where there is very poor infrastructure, vaccine reach and hesitancy.

These are a deadly cocktail for the next wave. The next wave might have a greater epicentre in the rural areas. 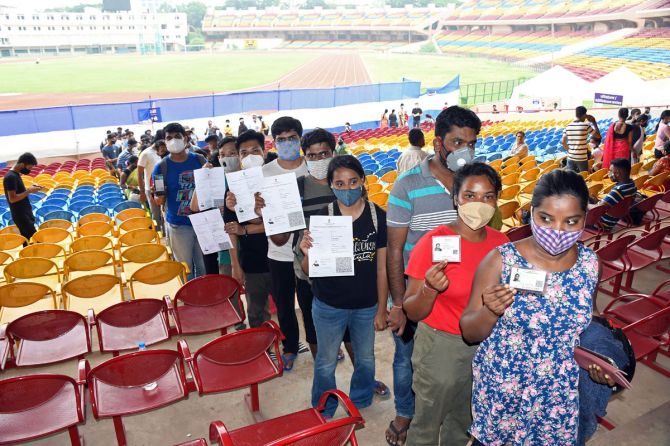 Last time when we spoke, I had asked you this question; about a comment made by the head of the World Food Programme that we were going to see famines of biblical proportions in 2021.
Have you started seeing such a situation in the rural areas after the second wave?

But the health crisis and the economic crisis are huge. If we don’t deal with it properly, it will lead to greater hunger.

The second wave was so dramatic that it is still unfolding.

The big lesson is that we cannot continue with the same health infrastructure because people were dying not because of the virus, but because of lack of oxygen.

That’s why we, at Oxfam India launched Mission Sanjeevani to aid rural health infrastructure in worst-hit states of India, and also train 35,000 ASHA workers with Asha kit to fight the virus.

This is to prepare them for the next wave. We shouldn’t be just concentrating on some hospitals in Delhi but all across rural India. Do you think the way the second wave exploded would open the eyes of the administrators?

The past actions of the government make me cynical. I don’t see the sense of urgency getting registered among the administrators.

I think the first wave and the global story have been enough to set the alarm bells ringing.

We are not even implementing our own expert committee’s recommendations. So, the second wave has been more dramatic.

Even the functionaries of the ruling party felt the brunt of the pandemic. They should understand that if you don’t have health, it is difficult politically also.

The only real path to fight the virus is by vaccinating everyone. But the vaccine policy in India was not only bizarre but it defied all logic.

Even the Supreme Court had to say that not on one count but on five different counts.

I would say the government has clearly been fumbling by not being able to provide oxygen, hospital beds and also vaccines. It is a massive failure.

I am cynical because even now they have not told us how they are going to ramp up the vaccine production to 200 crores.

Adapt, align and be agile

Delhi police hold meet with counterparts ahead of LS poll

Taylor Swift Admits Calling Out Joe Jonas For Dumping Her Was ‘Rebellious’ : ‘We Laugh About It Now’