The hero chef, identified only as ‘Lukasz’ in media reports, snatched a 1.5-metre tusk of a narwhal off a wall of the historic Fishmongers’ Hall and chased after the terrorist Usman Khan, confronting him on London Bridge along with another member of the public carrying an admittedly less storied weapon — a fire extinguisher. 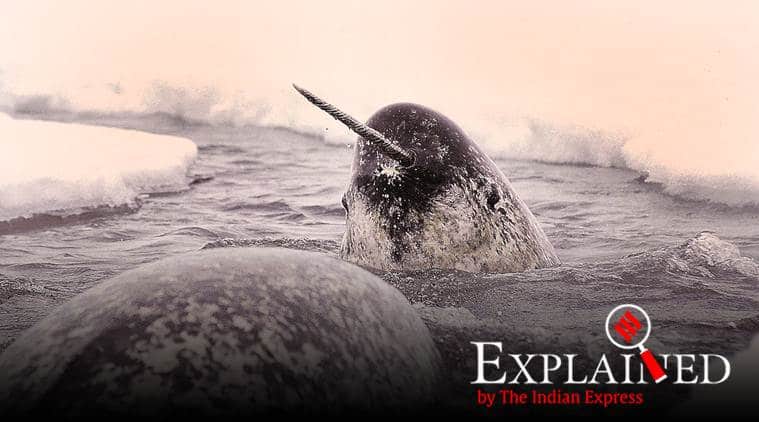 As the breaking bad news around Terror Friday in London diminishes, the story — and pictures — that continues to travel is that of the Polish chef brandishing a mythical ‘unicorn horn’, seemingly threatening to skewer the knife-wielding attacker shrouded in firefighting foam.

The hero chef, identified only as ‘Lukasz’ in media reports, snatched a 1.5-metre tusk of a narwhal off a wall of the historic Fishmongers’ Hall and chased after the terrorist Usman Khan, confronting him on London Bridge along with another member of the public carrying an admittedly less storied weapon — a fire extinguisher.

Khan had just fatally stabbed two University of Cambridge graduates, Saskia Jones and Jack Merritt, at an event inside the Hall. The fightback — which brought the terrorist down before the police arrived to shoot him dead — has triggered admiration and interest around the world, as much for the heroism of Lukasz and his comrade as for the intriguing tooth-spear at the centre of it. 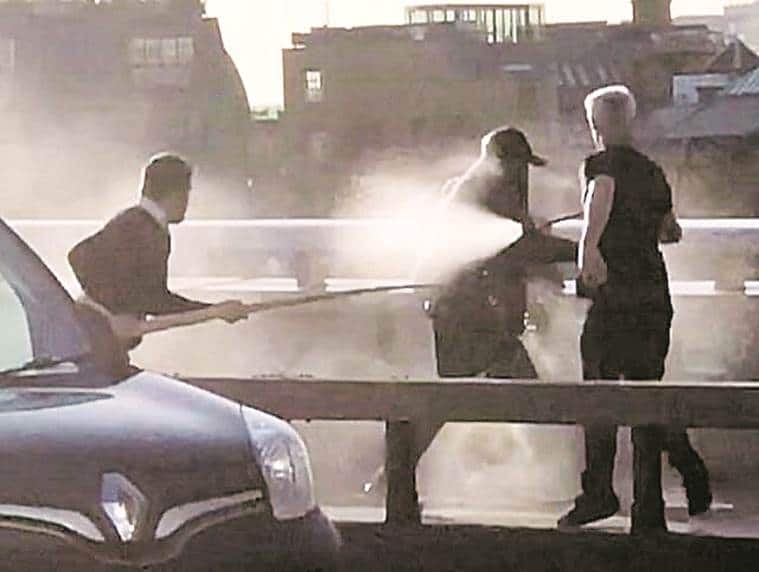 Whale with the tusk

One of the most mysterious of whale species, the narwhal (Monodon monoceros) is of medium size among the giant mammals, and inhabits the freezing waters of the Arctic around Greenland, Canada and Russia. It’s the only whale that has a tusk; and the narwhal’s tusk is the only one in the animal kingdom that protrudes straight like a lance. The tusk has a spiral — the thread runs counter-clockwise along its length, and can be swivelled by the whale up to 12 degrees.

The narwhal’s tusk has fascinated humans for centuries, and was at one time sold as the horn of a unicorn. In fact, it is a hollow tooth that grows through the whale’s lip, reaching up to nine feet in length, according to the Polar Science Centre at the University of Washington.

The tusk is almost always a male privilege, grows through the whale’s lifetime, and can weigh around 10 kg. About one in 500 narwhals grows a double tusk.

For sex and feeling

Scientists are not agreed on the point of the tusk. Given that the average female narwhal lives longer than the average male, it is not believed to be a critical survival tool, or one that significantly impacts the ability to feed.

A 2014 study concluded the tusk was a sensory organ with millions of sensitive nerve endings, used by the Arctic mammal to feel fluctuations in its surroundings. But most scientists agree that it is primarily a sexual trait used by males to compete for mates and to determine rank in pods.

The stuff of legend

The narwhal’s legend thrives on its narrative connection with the mythical unicorn. And that’s a story that began long ago.

In his Narwhals: Arctic Whales in a Melting World (2014), McLeish Todd referred to the writings of the Greek physician Ctesias of Cnidus, who is believed to have lived in the fifth century BC, and produced an account titled Indica (c. 398 BC). Ctesias gave a vivid description of a unicorn, which he believed was found in India. For many centuries thereafter, unicorns were thought to be for real, and they rose in popularity as a potent religious symbol linked to Jesus Christ.

The first records of narwhal tusks in Europe date to around 1000 AD. The Vikings likely hunted the ice whales, or acquired the tusks from Inuit hunters. This was the beginning of a high-end market that was exploited by traders who sold narwhal tusks as unicorn horns. It was only around 1620, when Artic exploration had progressed significantly, that the narwhal was identified as the source of the “unicorn horns”.

Even so, the tusks were coveted as a symbol of power and prized by European monarchs. In Lore of the Unicorn: The Evidence and Reported Sightings of Unicorns Throughout History (1930), the American author Odell Shepard estimated that around 50 whole tusks existed in Europe in the middle of the sixteenth century.

The narwhal tusk of Queen Elizabeth I of England and Ireland (1558-1603) was considered to be worth as much as a castle at the time, and the one belonging to one of the Kings of France at twice that. In 1671, a narwhal tusk throne was used in the royal coronation ceremony in Denmark, and the Holy Roman Emperor Charles V (Karl V of Austria) was said to have paid the nation’s entire debt with two tusks.

The masses believed the “horn” had the power to cure disease and act as an aphrodisiac. It was only around the mid-eighteenth century that the demand for the tusks started to ebb in Europe.

Besides polar bears, walruses, sharks, and orcas, the ‘unicorn of the sea’ faces a threat from humans who harvest it for its skin, meat, and tooth. Climate change is impacting the Arctic, the narwhal’s habitat, with unfavourable consequences. Many subpopulations are already in decline.

Lifting of lockdown blamed for rise in cases in Tirupati

An Expert Explains: What is the future of migration from Kerala?