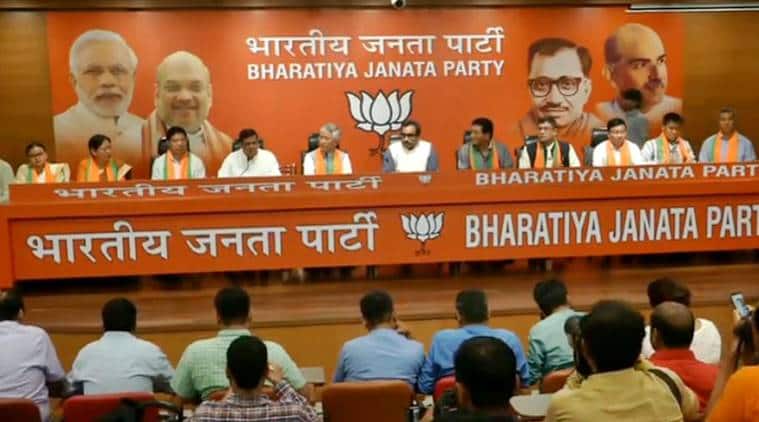 Ten MLAs of the Sikkim Democratic Front (SDF) Tuesday joined the BJP in the presence of working president JP Nadda and General Secretary Ram Madhav. With today’s development, former Sikkim chief minister Pawan Kumar Chamling’s SDF is left with 5 MLAs in the 32-member Assembly. This also gives BJP the status of main Opposition party on the state where it had not won a single seat in the Assembly polls in which the Sikkim Krantikari Morcha (SKM) won 17 seats while the SDF won 15 seats.

The MLAs who joined the BJP include five-term MLA Dorjee Tshering Lepcha, who served as a minister in the Chamling government for three terms, and three-term MLA Ugen Gyatso. Lepcha said they were impressed with the “look east” policy of the Narendra Modi government, as he highlighted that his state is bordering China, Bhutan and Nepal.

This is the first time that MLAs of a regional party in Sikkim has joined a national party “en bloc”, he told PTI. “We want lotus to bloom in Sikkim,” he said, referring to the BJP’s election symbol.

The SDF headed by Pawan Kumar Chamling ruled the state for over 25 years, making him the longest-serving chief minister of the country but he lost power in the recent elections.

A ‘silver’ fish from Velankanni

A ‘silver’ fish from Velankanni

Producers’ Guild recommends new protocol to be followed after film productions resume
We and our partners use cookies on this site to improve our service, perform analytics, personalize advertising, measure advertising performance, and remember website preferences.Ok