Today, with her school shut in the pandemic lockdown, Rakhi's question is starkly different. “Papa ke liye koi naukri hai Dilli main (Is there a job for my father in Delhi)?” 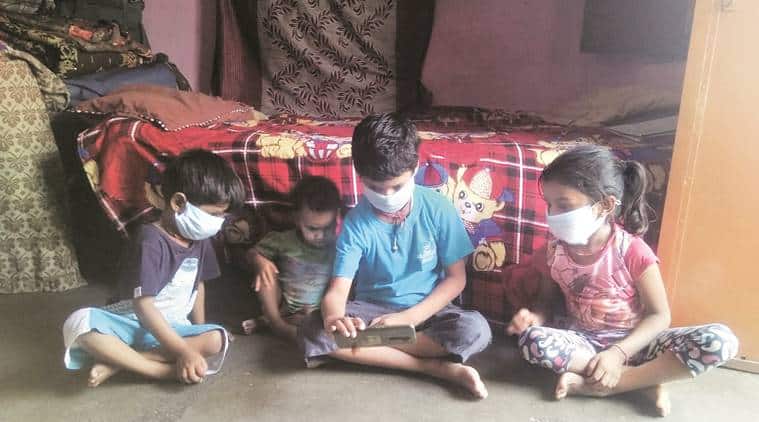 ONCE upon a time, two years before Covid, Rakhi was among the toppers in her class, a confident nine-year-old who held out her hand and asked, in English, “How are you? How was your day?” That was 2018, when The Indian Express visited her school in Dhaulpur, Rajasthan.

Today, with her school shut in the pandemic lockdown, her question is starkly different. “Papa ke liye koi naukri hai Dilli main (Is there a job for my father in Delhi)?”

Her father, a daily wage labourer, has been out of work for months. While the state government has launched an online programme linking 13 lakh families through WhatsApp groups, Rakhi isn’t among them.

Her family doesn’t have a smartphone.

Rakhi’s story shows how learning in lockdown is more messy than what advocates of online teaching would admit. Every roadmap is riddled with uncertainties. What will happen to the countless like Rakhi? Will they be the new drop-outs? And when schools reopen, what will change?

“Schools are wonderful ways for children to socialise, learn to sit in one place, listen to the teacher drone on and on. Those are essential skills. But the paradox is, some of the stuff online is so good, so compelling — a Khan Academy session, for instance — that without schools, children won’t learn these essential skills of learning to sit in one place, being bored, etc,” he says.

Getting bored may be a needed skill, suggests Anurag Kundu, member of the Delhi Commission for Protection of Child Rights. He says education is more than about “learning algebra on a tab”.

“It’s about social behaviour, learning to understand others’ emotions and your own… When schools reopen, yes, educational technology will play a more dominant role than was earlier, but I don’t think it will change how we look at education in the first place.”

The Delhi government, which Kundu represents in DCPCR, has tried to keep learning going in its schools with live YouTube sessions and WhatsApp messages.

Yet, Shailendra Sharma, principal advisor in the Delhi government’s Department of Education, says the government isn’t all gung-ho.

And that has to do with the realisation that in a country with deep social inequities, where barely 23.8% households have access to Internet, lakhs of children could be left behind.

“That’s why we are taking a very calibrated approach. We are not in a race to complete the syllabus… Personally, even if one child is left out of this learning process, it’s alarming. Because this is not about numbers or percentages. This is about children,” says Sharma.

Kundu of DCPCR fears the Covid economic distress will bring a new set of social challenges to schools.

“With poverty comes a series of challenges – nutrition, health and hygiene. And more dropouts — boys will be expected to start working earlier, girls may be under pressure to marry earlier… So a lot of socio-economic benefits that were laboriously built over the decades are likely to be undone,” Kundu says.

While many argue that a health emergency is a wrong time to try a radically new educational approach, Persainjit Singh is convinced that this is “online education’s big moment”. He is one of the founders of Extraclass — an edtech platform that coaches school children for Joint Entrance Exams for entry into premier engineering colleges.

“As a student, online learning has opened up an entire buffet of options for me. One, it’s more affordable than traditional schooling. Also, it becomes more about me and what I want as a student. I don’t have to adapt to teachers and their teaching style. Now that online has caught on, teachers will have to catch up or end up redundant,” he warns.

Not so fast, says Arunabh Singh, Director of the Ghaziabad-based Nehru World School. “Technology won’t replace teachers. But teachers who use technology effectively may replace those who don’t,” he says.

While his school, like most others in cities, has entirely moved to virtual classes, he believes the fact that online education — despite being around for at least two decades — hasn’t taken off, points to its limits.

Shashi Banerjee, principal of Shiv Nadar School, Noida, agrees. “What this moment tells you is that machines should be allowed to do what machines can do; what they can’t do – pastoral care, music, art, dance, theatre – schools will continue to do.”

But for an education system that’s long been criticised for being unimaginative and hackneyed, could this moment be the one of essential disruption?

“Yes, this disruption was needed in terms of how we were only becoming consumers, how we were relegating, delegating to a lesser someone, the excessive materialism that had seeped in, etc. So we needed someone to stick their neck out and say let’s redefine what school means,” says Banerjee of Shiv Nadar School, Noida.

“This was more of a situation where teachers had to guard against their own irrelevance – unless we catch up, we will be irrelevant to the millennials. Mindsets change only in times of trauma. And these are traumatic times,” she says.

How will these times change the classroom is being worked out, says Banerjee of Shiv Nadar.

“Maybe school routine in coming days can be one where where, once a week, midweek, children learn from home. Or that you let the teacher be for a day and learn on our own. And maybe end of the term, children take a sabbatical that would involve virtual learning,” she says.

Francis Joseph, a Mumbai-based school development expert whose SLN Network works with public and private schools, warns of an “abnormal year” ahead. “People have been calling this the new normal. I don’t want it to be the new normal. But all of us – parents, teachers, children – will have to be prepared to work differently this year at least. And work more, if we have to get even close to what we were learning till last year.”

What if Pak. sends spies as Hindus to India, asks CM at town hall meet

‘Never seen him eat vegetable’: US official’s worry about Trump’s diet in India