If purists are surprised as to why and how people are not demanding prohibition or not talking about past promises, both in the election manifestos five years back and even those made to the courts, the answer lies in how the state has been evolving and changing these past few years, says N Sathiya Moorthy. 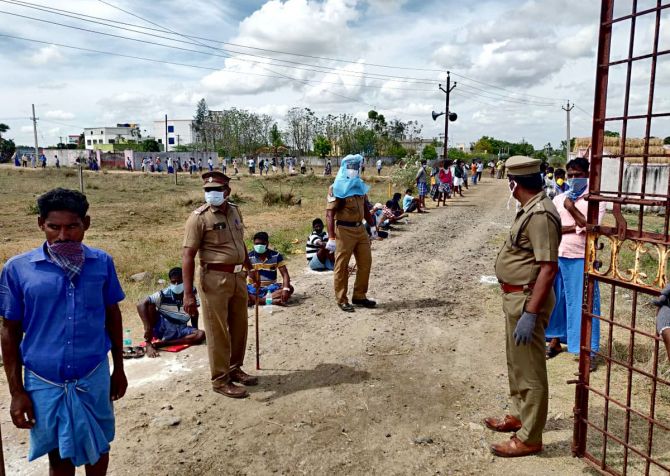 Whoever between them comes to power in Tamil Nadu on May 2, the vote count for assembly polls, the Big Two Dravidian majors in the ruling All India Anna Dravida Munnetra Kazhagm and the parent-rival DMK have ensured that the state’s tipsters won’t be denied their daily or weekly quota at least for some more time to come.

Neither party, nor any of the other major electoral entities, has made ‘total prohibition’ an election issue or a future commitment in their respective manifestos for last month’s poll.

This is in contrast to the previous assembly polls in 2016. At the time, thanks to popular protests outside many liquor shops across the state, there was greater public awareness and expectations on the issue. The death of Gandhian Sasi Perumal atop of a mobile tower in southernmost Kanyakumari district, to press his demand for total prohibition, that too only months before elections 2016, added to the momentum of the time.

Tamil Nadu is the only state in the country where the government sells all liquor after the second Jayalalithaa dispensation (2001-06) ‘nationalised’ liquor sales first and sand mining and sales for construction, next. The government argued that by getting into liquor trade, it was ensuring that the consumer is not supplied with spurious liquor or ‘hooch’, and avoidable deaths would not recur in the state.

A feeble argument this on paper, but then there has not been any major liquor tragedy in the state for a decade before the Jaya government founded the Tamil Nadu State Marketing Corporation Ltd (Tasmac). Since its formation, Tasmac controls all retail sales of liquor, including ‘Indian-made foreign liquor’ (IMFL). In fact, IMFL is the preferred brand in the state as against traditional arrack.

Despite repeated demands from coconut farmers from the western belt, which was/is a stronghold of the ruling AIADMK, successive governments have denied sanction for extracting toddy, thus providing additional incomes for farmers, especially during surplus coconut seasons when nut prices crash.

The statewide protests were spearheaded by the women wings of left-extremist groups. It became a huge success, as it began by demanding the closure of Tasmac outlets near educational institutions, ration shops, places of worship and important government offices, hospitals, etc. These are also places where children and women frequent and where they needed a sense of security.

However, when the protests caught up, the protestors reportedly stoned Tasmac shops, at times setting them afire. The Madras high court intervened, and the Jayalalithaa government could not escape giving a commitment for phasing out liquor sales, not just by the state but even otherwise. It began with a token closure of 500 shops.

In between, the courts ruled against liquor shops on highways, as truck and other vehicle drivers were tempted to stop over for a quick peg or two, leading to avoidable and costly road accidents. Wiser counsel prevailed when existing shops on the highway moved a little interior, or just changed the entrance of the shops to a sidelane, and not facing the highway.

Post-poll and Jaya’s return as chief minister, no one really had any time to take up the cause of prohibition, especially after she feel seriously ill, leading to her year-end death in 2016. The internal squabble in her ruling AIADMK, leading up to the current and very stable government of Chief Minister Edappadi K Palaniswami (EPS), ensured that there was no revival of the prohibition demand.

Historically, the AIADMK and DMK governments since nationalisation of liquor sales in the state have outlined how excise duty formed a substantial part of the state’s revenue, and how those revenues go a long way in supporting imaginative social welfare measures, including free bicycles and laptops for students, free cooking gas, grinder and mixies for the working home-wife especially.

A moralistic argument arises if the government should feed the destructive potion to the citizen and then use that very money to give freebies and even better healthcare. There are no answers, but suffice to point out that even the Opposition DMK has not talked prohibition in its manifesto. What more, the party’s manifesto also outlines how a DMK government, if elected, would mop up more revenues from nationalised mining for minor minerals starting with river sand, through better management and transparent processes.

Yet, purists are surprised why and how the state’s people are not demanding prohibition and are not talking about past promises, both in the election manifestos five years back and even those made to the courts. They are particularly piqued that the brave Tamil woman, who comes in the long lineage of Kannagi, Velu Nachchiyar and a host of other idols from literary and historic past are not provoked internally, to react — as even the previous generations had done on occasions in an earlier century.

An answer to the questions lies in the way the state has evolved and developed over the decades since Independence, more so in recent times. What is true of the urban woman and family is also true of their rural counterparts, and that is what the purists and protest leaders from the recent past need to understand and acknowledge.

Today, at the community-level, the failure of agriculture and handloom textiles caused untold miseries to the common man, especially those in the rural areas, forcing him to migrate, temporarily first, and permanently later on, in search of jobs and family incomes. This period of uncertainty to nothingness for a decade or two was followed by the economic boom, induced by the reforms, and the availability of new jobs, both in the corporate sector’s outsourced allied services and the allied ‘construction sector’ and the like in the urban centres.

Yesterday’s farm labour became today’s office assistant, yesterday’s weaver and others became construction labour, from masonry to carpentry to electrical works, plumbing and painting, all of which became an expert job in their own ways. Back in the village, even small and marginal farmers took to mechanised farming to whatever ways possible, as both the man and the wife were already into other avocation, and there were enough paid hands in what were still seasonable and unpredictable jobs in the farming sector. All of it meant a changing lifestyle, which it is now.

Yes, if liquor sales is on the high in the state, so is the consumption. But what makes a difference between now and the past is that men in rural and even semi-urban or urban-lower class backgrounds, earn and pay for their liquor, instead of stealing it from the family kitty — whoever between the husband and wife has earned it.

Two, even those men that drink liquor every evening, or at least every weekend, earn well in their circumstances — and provide for their families. In the past, and even now the assumption was/is that all men, especially in unseen rural areas, are drunkards and that they beat up their women, to take away their hard-earned money, which would have otherwise gone to feed the children and older people in the family.

This apart, today’s women folk even in rural Tamil Nadu is enlightened and empowered. She has a job and income of her own. In many cases, including the government-funded MGNREGA job scheme, women are preferred and they get an additional income. Successive governments in the state have also helped create women self-help groups and fund them in towns and villages alike.

This has created not only a fall-back funding option for the woman, but also friends who would take up her personal or family case with the local authorities, starting with the ‘oor panchayat’, a group of local elders who have traditionally ensured that the community’s ‘moral fibre’ and family commitments are not lost.

The empowered woman is also not shy or afraid of knocking on the local police station if the husband harassed her and her children too much, demanding money for his day’s liquor binge. The existence of police stations in interior villages, and also all-woman police stations and outposts, have played an unacknowledged role.

On the reverse, given her own exposure to the outside world and expectations for the self, she is ready to concede his own space and entertainment. Just as she has her TV serials in the evening to sob with, her group/family pilgrimage and sight-seeing weekend visits, she does not mind if the husband or the father or the brother indulges a wee bit.

If someone thought that only the urban woman understood the need for ‘his time’, that is not true. If in some cases, the working male (or female) in the urban milieu, eating non-veg food or sipping wine or hard liquor was/is a sin, it was never the case in most rural settings. The issue there was one of quantity and also quality — and the man’s ability to carry his glass in a small group or a larger crowd.

There is an unwritten rule. The man should not get drunk, nor should he get into drunken brawls with friends, relatives or others, bringing a bad name to the family, especially for the children in their circles or schools. As a responsible father, most men in the state, especially those in rural areas, do not want to come down in the esteem of their dear children.

It’s akin to the kind of reservations that the second-generation bank and LIC employees in urban centres, in ‘enlightened states’ like Tamil Nadu, have for participating in union rallies and protests — especially being seen on TV news by their children and their classmates and team-mates. It is the kind of thinking that the urban elite may not be able to acknowledge, understand and appreciate — but the political class, including the political administrators, seem to have understood, as much as they understood the economic needs and educational aspirations of their people.

Yet, it still hurt the purists and anti-Covid frontline workers and other NGOs when the EPS government exempted Tasmac shops from limited lockdowns, both during Phase I and now Phase II. So much so, one reason for the early easing and latter-day lifting of complete lockdown during Phase I was said to be the government’s need to boost the falling revenues. Some government leaders also did not shy away from accepting it.

Today, during the second phase too, the government began by exempting Tasmac outlets from partial lockdown. It caused eyebrows to be raised, with apprehensions that someone may embarrass the leadership by moving the courts. So, when over the weekend the government expanded the lockdown, it could not but include Tasmac shops. But only after the outlets had registered near-record high sales, on Saturday, the last day of being open.

Rupee slips for 5th straight session, down 15 paise at 74.73 against USD