The Congress chief hit out at the BJP’s ideological mentor, the RSS, alleging that it was a “male chauvinist organisation” and did not have women in it, thus cannot do what the Congress can for women. 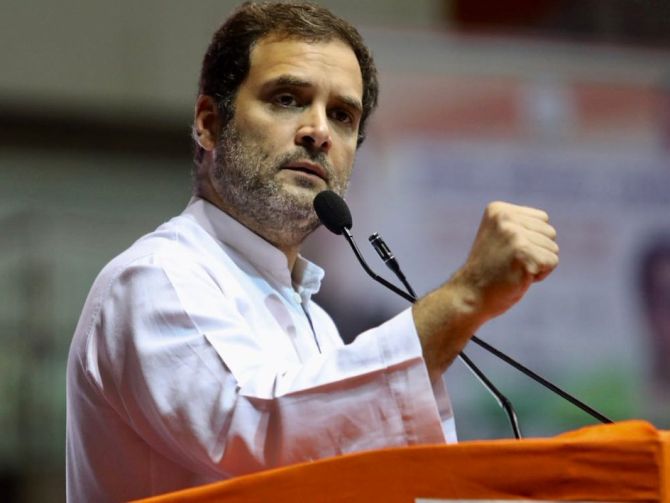 Congress president Rahul Gandhi on Tuesday hit out at Prime Minister Narendra Modi on the issue of women safety and questioned his silence on the alleged incidents of rape of girls in some shelter homes in Bihar and Uttar Pradesh.

The Congress leader said what they did against women in the past four years had not happened in the country in the past 3,000 years.

He hit out at the Bharatiya Janata Party’s ideological mentor, the Rashtriya Swayamsevak Sangh, alleging that it was a “male chauvinist organisation” and did not have women in it, thus cannot do what the Congress can for women.

Gandhi also promised to extend his party’s full support to the passage of the women reservation bill and said if the Modi government does not bring it, the Congress will do so soon after coming to power.

He also talked of empowering women within the Congress and bringing them forward in the organisation, for them to lead a state or the country one day. He promised to include more women in central units of the AICC, saying “the country needs them”.

Launching a fierce attack on the prime minister, he said various institutions were under attack by the BJP and the RSS, who have “devastated” the country, and that the Congress party will unitedly defeat them in the coming days.

Referring to the government’s slogan of “beti bachao, beti padhao”, he said that it was actually for “saving the daughters from BJP MLAs”, an apparent reference to some BJP leaders accused in rape cases.

“Institutions are under attack in the country, be it Parliament, vidhan sabhas and the judiciary. Minorities, Dalits, women, tribals, small businessmen are under attack. We will fight the BJP and defeat them in the coming days.

“The Congress party and the opposition are working together to fight the ideology of the BJP. We are fighting an ideological battle,” he said while addressing a “Mahila Adhikaar Sammelan” at Talkatora Stadium.

He questioned the silence of Modi on atrocities against women in the backdrop of rapes of girls in shelter homes in Muzaffarpur in Bihar and in Uttar Pradesh.

He said, “The prime minister speaks on everything — bullet train, toilets, but not women. Whenever there are atrocities on women, he does not speak up.”

He also said that whenever he goes abroad and embraces leaders, he has no answer on why women are not safe in India.

Women are being raped in UP, Bihar and so many other states but the prime minister is quiet. Biggest difference between the BJP/RSS and the Congress is on the place of women. 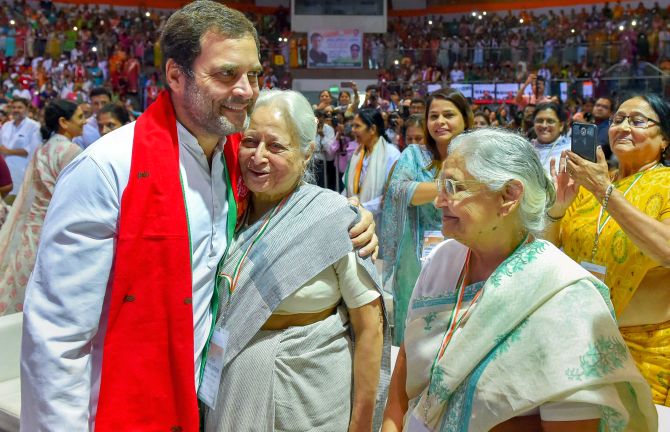 Talking about the women reservation bill, which is pending for the last few years, the Congress chief said the BJP lacks commitment on the issue and cited the example of BJP’s ideological mentor — the RSS, which he said was a “male chauvinist organisation”.

Promising to bring women forward within the Congress and give them their rightful place, Gandhi while pointing to the slogan “your fight is our fight” put up at the conference, said you can add “your right is Congress president’s fight”.

“The RSS and the BJP will never be able to show the country a similar vision.

Their parent organisation, the RSS, in its history has never allowed a woman into its organisation. The RSS is purely a male organisation. There are other organisations in the BJP that have females in it, but RSS is a completely male chauvinist organisation that does not believe in giving space to women. So they simply can’t do what we can do,” he said.

He said if he faced with a choice between a man and a woman for selecting election candidate, he will choose whoever is more capable.

“If both are equally capable, I will choose the woman as a candidate,” Gandhi said.

“My job as Congress president is to ensure, women have equal space in our organisation. Our aim is to have 50 per cent women in our party,” he said.

Gandhi also said that the media should no longer worry, while alleging that the BJP and RSS is frightening them.

Addressing the Congress Parliamentary Party meeting in Parliament House earlier in the day, he said there is a rising tide of anger against the ruling dispensation and party MPs must work hard to give people an alternative to the “bogus promise of Modiji’s Achche Din.”

People of India are looking up to the Congress and its allied parties to help remove the Modi government and replace it with one which will listen to them, understand their problems and provide solutions to help reduce poverty, unemployment and inequality in the country, the Congress president said.

“There is a great responsibility that is being placed on all of us today, to win this historic struggle between the forces of democracy and social justice versus those of autocracy and social hierarchy,” he said.

The Congress chief recalled Modi’s remarks in 2014 when he was elected that India had been a slow ‘passenger train’ for 70 years after Independence and would become a sleek and shining ‘magical train’ destined for achhe din under his guidance and rule.

“Give me your votes, said Modiji, and ‘I will take you on the best and most comfortable journey of your life’. Four years of Modi rule later, sadly, India today looks more like a train that is being driven to disaster by an autocratic, incompetent and arrogant driver, who does not care what happens to the passengers he is responsible for,” Gandhi said.

The people of India, he asserted, are demanding change and will no longer be fooled by Modi’s magical train that is headed for a “bad accident”.

Kashmiri filmmaker on a mission for ecology

Part of 5-storey building collapses in Mumbai; no casualty

Lockdown has made my life miserable, says expelled Kerala nun