The differently-abled deserve a normal life.
Nothing will stop Poonam Natarajan from ensuring that India, slowly but surely, gives it to them, discovers Shobha Warrier. 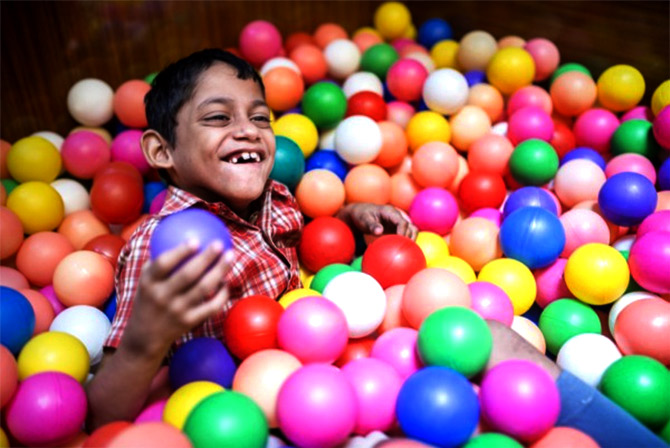 In India ,Poonam Natarajan‘s name is synonymous with care for the disabled because of her pioneering work in the field.

It all started more than 30 years ago in the garage of her house under the name, Spastic Society of India, Madras.

Due to her exemplary work, she was appointed chairperson of the National Trust at the ministry of social welfare in 2005, based on nominations by people with disabilities.

Poonam was among the 10 people from the Asia-Pacific region to be honoured with the Asia-Pacific Disability Rights Champions Award in 2012 by the United Nations Economic and Social Council.

She was part of the Social Commission for Asia and the Pacific along with the government of the Republic of Korea.

This is the story of Poonam Natarajan and her organisation, Vidya Sagar, as told to Shobha Warrier/Rediff.com 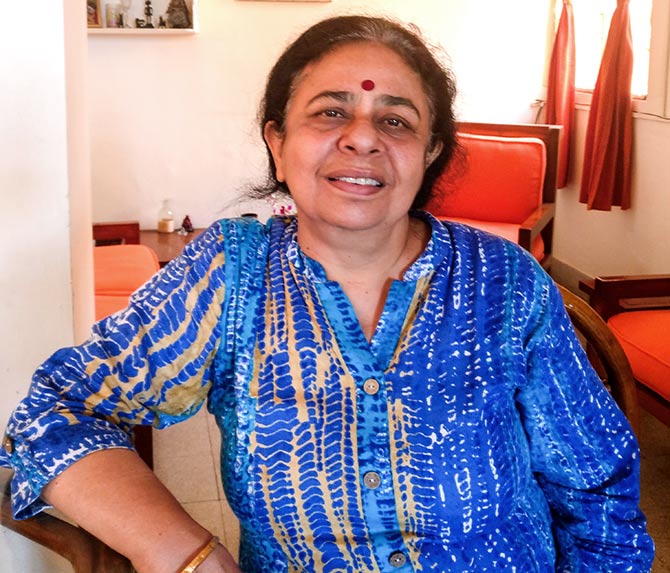 A Punjabi who never lived in Punjab

My father (General) Krishan Mehra (retired) was in the army, so I grew up in many cities in India. Yet, I do not feel rootless.

I met my future husband, Natarajan, at the Jawaharlal Nehru University in New Delhi; we were classmates.

Though he was a Tamilian, he studied in Punjab at the Sainik School in Kapurthala and knew more about the state than I did. He had even seen rural Punjab, which I had not.

JNU was a wonderful experience; many of my ideas and dreams were shaped there. It made me feel more responsible towards society.

We students felt that the reason we were born in independent India was to build the nation and make it great. Working just for money was not our priority as we wanted to build an egalitarian and dynamic country.

That was the dream Natarajan and I had then, and our dream expanded as we grew older. 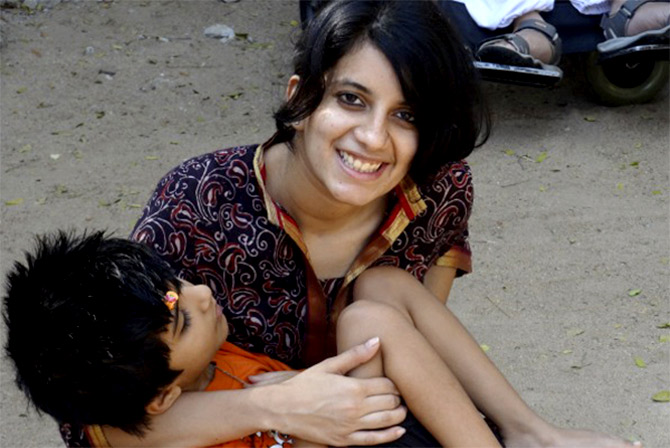 A baby with cerebral palsy

In 1979, our son Ishwar, whom we lovingly called Ishu, was born.

He was premature and had to be kept in an incubator for a while.

His developmental milestones were delayed and, even when he was a year old, he was unable to control his head or roll over.

All the doctors would tell us was that he was slow and things would be fine. We felt we were in a long, dark tunnel with no end in sight.

It took a long time before we learnt he had cerebral palsy.

My father, who was posted in Mumbai, heard about the Spastics Society of India and took Ishu to Mumbai. The visits also helped me decide to do a one-year teacher’s training course there.

Those were the early eighties, when everybody was scared of even hearing the word disability.

If you had a child with disability, people pitied you. They looked at you as if your life was over and you could never be happy.

I accepted my baby, but it took a long time for me to accept his disability. 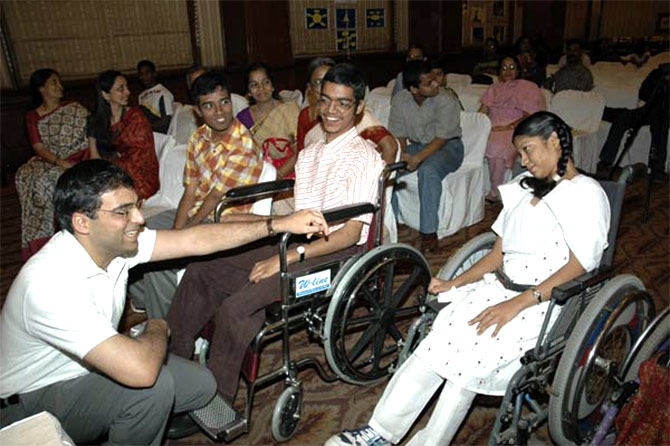 A centre in Chennai

In 1984, when my husband was transferred to Chennai, I too moved there from Delhi.

I had been thinking of starting a parent training programme for some time as I felt parents with disabled children needed to understand the condition of their child.

To my pleasant surprise, on the first day itself, more than 25 parents attended the programme with their children. All of them wanted to know how they could help their children.

The problem they faced was that the other special schools did not let the parents in; they had to wait outside or leave the child and go.

My intention was to involve the parents in the process and demystify disability and the training needed to cope with it.

We were seven women working at the centre, including a physiotherapist, a speech therapist, a special educator, an occupational therapy instructor, a social worker and an administrator.

Each one of us trained the mothers on how to help their children at home.

I believe that unless parents learn to give therapy to the child, the child is not going to learn properly.

Therapy is not a one- or two-hour session at school; it is a 24-hour job. And it’s not just the mother; the father, grandparents and siblings can help a disabled child in many ways.

Special schools are a Western concept. In India, you have to think of quality and quantity through the involvement of all the family members.

No matter what the education level of the parent, it is possible to train them to take care of their disabled child.

In fact, my experience reveals that illiterate mothers accept their disabled child without difficulty.

The more educated the mother is, the tougher it is for her to accept such a child. It is toughest for a mother who is a doctor.

I am happy to say I pioneered training for parents with disabled children in Chennai.

Naturally, parents wanted to know about the disability of their child and learn the therapy needed to help their children. The number of parents attending our programme increased and my garage became too small to accommodate them. 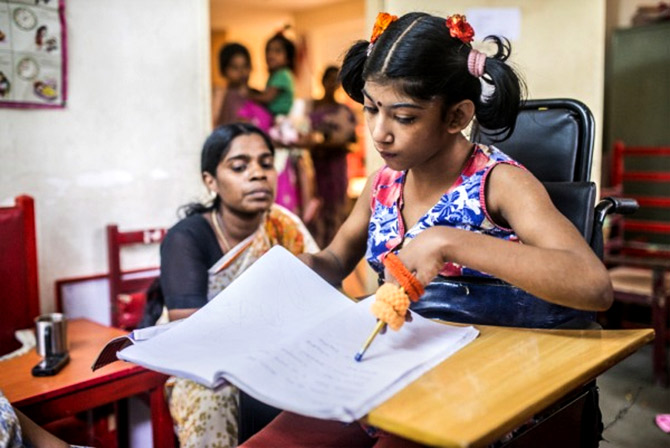 From a garage to a bungalow

An informal group of people called the Friends of Spastic Society of India, Madras, told me that Shashi Kapoor was producing a film called Utsav. They suggested I write to him to request a premiere in Chennai to raise money for us.

I immediately wrote to Shashi Kapoor and explained that I ran a school for disabled children in a garage and wanted to move to a better place.

I didn’t expect a reply, but he wrote back saying we could have a premiere in Chennai to raise funds.

Shashi Kapoor, Rekha and all the other stars came for the premiere.

The money that we raised allowed us to move to a bungalow.

It was tough, though, as nobody wanted to rent a house that would become a school for children with disabilities. 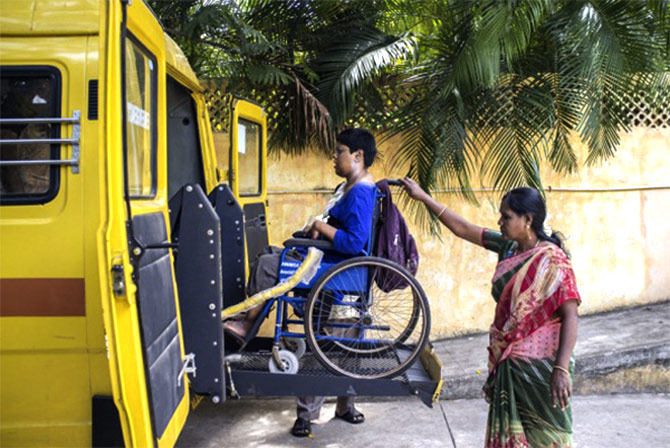 In our new home, we had 45 families and seven staff members.

It was the children who determined which new programme we needed to start and what direction we needed to take; we planned our programmes as per the child’s individual needs.

For example, once we had enough children ready for academic work, we started an academic stream that followed the regular school curriculum.

Then, many working mothers wanted us to start a day centre, so we did that.

When a 17-year-old boy who had not gone to school before came to us, we started an adolescent programme along with vocational training.

A baby made us start an early intervention programme.

We always kept the needs of the child in mind; when we had 164 children, we also had 164 Individualised Educational Plans.

We started getting so many enquiries that we did not know how to admit all of them; each child needed special attention.

But I had decided at the beginning itself that we would not choose our children; we have always followed the ‘First come, first served’ method. From Spastic Society of India to Vidya Sagar

As a person who believes in community-based work, a building of our own was not that important.

But as the number of parents, children, and programmes increased both exponentially and quickly, the bungalow could not accommodate their needs.

It became necessary to have our own building.

It took us six years, but we managed to convince the government to donate some land. It took another year-and-a-half to construct the building.

There were many times when I did not have the money to pay the salaries but we somehow pulled along.

There were times I would pray for someone to come forward and donate money and, almost magically, it would happen particularly when we were in dire straits.

Finally, in 1996, our own building — with four floors — was ready. It was very exciting to move into a place that had so much space.

Till 1998, we were part of the Spastics Society of India, Mumbai, and functioned as a branch of the Mumbai office.

When we became too big, they found it difficult to administer us, so we decided to become an independent organisation and named ourselves Vidya Sagar.

In 1999, I lost my husband — who was a huge support; I drew my energy and inspiration from him — quite suddenly.

It took me years to get over his sudden death. It was even tougher for my son as he was very close to his father. 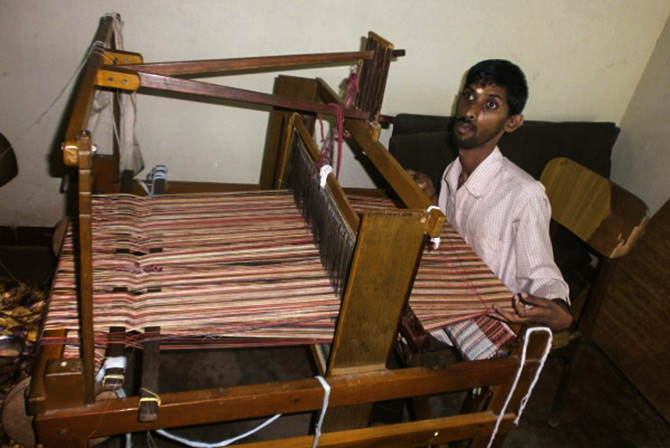 In 2005, I was offered the post of chairperson, National Trust for Welfare of Persons with Autism, Cerebral Palsy, Mental Retardation and Multiple Disabilities, under the ministry of social justice and empowerment.

This happened around the time I was thinking of passing the baton at Vidya Sagar to somebody else. After all, I had been managing it for more than two decades.

I have seen too many founders getting too attached to their organisations.

I have also seen that, if the founders do not find a good successor when they are alive, the organisation degenerates after their death. I did not want that to happen to Vidya Sagar.

Vidya Sagar had a team of 120 people then and we were helping 3,000 parents and children every year when I moved to Delhi.

My tenure there was for three years but I continued to work as the chairperson of the National Trust for eight years and seven months.

It was a secretary-level post and, for the first time, I was in the middle of bureaucracy, government and protocols that were quite new to me.

Though it was a powerful position — I worked with 800 NGOs across the country — I sometimes felt quite powerless.

The National Trust Act for autism, cerebral palsy, mental retardation and multiple disabilities was passed in 1999 but was not implemented.

The main aim of the National Trust Act was to answer the question, ‘What happens to the child when the parents are no more?’ as people with disabilities might remain dependent on others most of the time.

So the question was: How do we create a support system for such people?

We implemented 14 schemes, the biggest of which was health insurance, which were introduced across the country.

Till then, people with disability were not included in the list of insurance beneficiaries.

We broke that barrier and started a health insurance policy that included all disabilities. It was called the Niramaya Health Insurance.

We also ensured that the family pension went to a disabled child after her/his parents’s death. 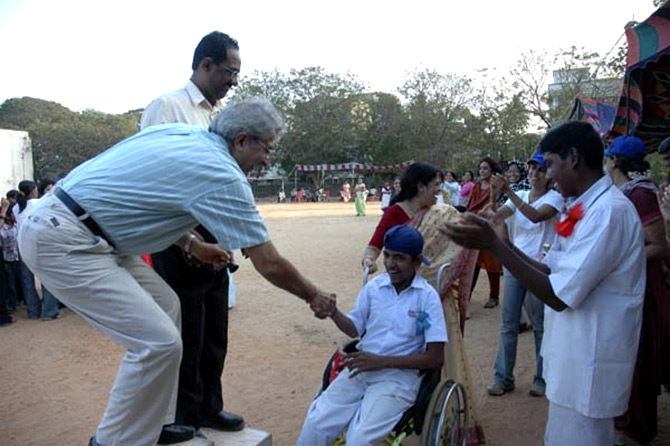 Taking it to the next level

I am back in Chennai with a new dream.

After working at the national level, I wanted to set up a project where people with disability can live independently in the community.

The fact is, there is not enough support system for adults with disability in our country and there is a need to create such a place.

Now, we have another piece of land and we are going to build our pilot project for disabled adults.

The major challenge before us is to make homes more accessible and provide transport in the form of wheelchairs.

There is a need to have a pool of caregivers and train them to take care of the disabled.

I want to create a curriculum to train the caregivers. I also want to give leadership training so that there are people to take care of such homes.

My dream is to create a model that can be replicated in other parts of the country.

When I look back, I see more satisfying moments and happy moments than moments of sorrow.

There have been lots of ups and downs, lots of trauma and pain and so many losses and tears. But all of us have learnt to be happy as a community. 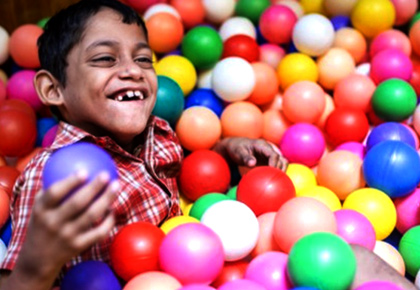 The Supreme Court has overlooked the gravity of the Delhi violence