‘People are just putting the mask below their nose.’
‘They are only protecting the mouth, but not the nose.’
‘People need to understand that it is the nose which has to be protected.’

Maharashtra had 35,952* new COVID-19 cases March 26 and tomorrow may bring a further rise.

India is once again showing alarming movements on the Worldometer panels — 11,846,652 total cases, creeping up closer to World No 2 Brazil.

It’s a season to worry about Death too. A staggering and saddening 53,795** people have died in the state of Maharashtra since COVID-19 began in 2020. And 111** of them — maybe people you know — died just yesterday.

Dr Jayanthi S Shastri is probably looking at these numbers too, but as a senior and very experienced microbiologist and the professor of microbiology at the BrihanMumbai Municipal Corporation run-BYL Nair Hospital and the head of the molecular lab, Kasturba Specialty Hospital, both in central Mumbai, the numbers tell her a slightly different story.

She has had long and tough innings with COVID-19. Back in early March last year, shortly after COVID-19 reared its spiked head in Mumbai, this physician was working 12-14 hours, or more, daily, to tackle the testing operation for COVID-19 in the city.

Dr Shastri says: “This year, we know the virus. Last year, we didn’t know anything about it. Last year went in speculation. Today it is a fight head on. We are somehow taking everything in our stride.”

She analyses the quickly changing Mumbai COVID-19 picture for Vaihayasi Pande Daniel/Rediff.com and explains which are the areas of concern and which are not.

And offers information on the double variant.

Dr Shastri is very vehement about what each Mumbai-wallah needs to do to help improve our city’s picture. Listen to her, please! Why are COVID-19 cases increasing so rapidly in Mumbai right now?
How long do you think this phenomenon will continue for?
From an experienced microbiologist point of view, how would you explain these surges, because they are higher than last year?
Given the huge numbers, this does not seem to be a milder version of the original SARS-CoV2 in play or maybe it is?

Let’s talk about the severity and transmissibility.

These are the two things we have to look at.

Definitely, the R0★ of this virus is higher.

You cannot, generalise about the virus, because we have not sequenced each and every positive sample.

Just, wherever there has been a cluster sampling or in international travelers, we have sequenced.

So, we don’t really have a complete picture of the virus.

Having said that, what we are observing is this virus — whichever strain it is, because we have not really characterised all the virus strains — it is definitely more transmissible.

The R0 seems to be much higher, maybe around 2-2.5 — I don’t know — because we really have to do those calculations. But, definitely, it is higher.

What we are also observing is the mortality is not there.

The severity of disease is also not there.

(The illness of those afflicted now) is not very severe that they require oxygen. Mortality is not higher than before.

From a layperson’s standpoint, even though the numbers are higher, and this strain may be more infectious, you could still say it’s a milder version and it’s not as bad as the London strain that was/is causing havoc in the UK.

I wouldn’t call it that way at all. It is definitely more transmissible. But you don’t see so many deaths, right?

So use of the word ‘milder’ is a references to the infectiousness or to less viciousness?

I am not saying milder or mild. What I’m saying is that definitely it is more transmissible. The transmissibility is higher than what we observed in, say, November, December.

But the severity of disease is not higher. And the deaths are not higher.

We have to wait and watch, actually. 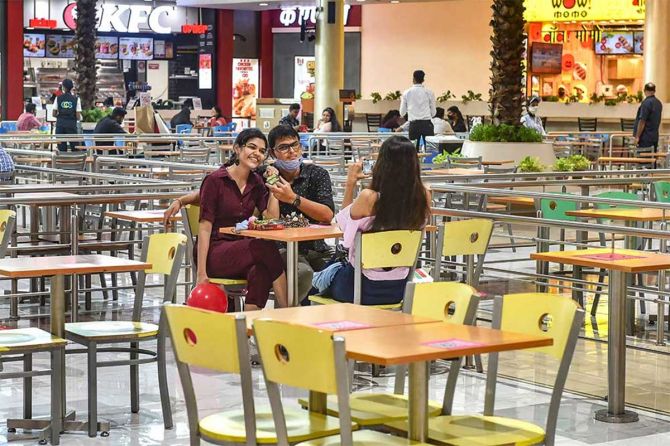 A senior microbiologist told Rediff.com Sunday, that the surge cannot be because Maharashtrians and Mumbaikars are suddenly less well behaved than they were, say late last year, or in October or whenever.
In news discussions on television and podcasts, Maharashtra seems to be blamed for the higher load of cases, as if the state and its government has been inept in its handling of the situation. There’s a reason for this surge?
It is not just bad behaviour?

The malls and markets are there across the country.

People are the same, you know. The mentality of people is the same.

There’s nothing so specific (that it is about just Maharashtra or Mumbai).

The number of people, in a defined area is much higher than probably in other states.

But if you talk of human behaviour, I think, across India it is the same. I understand it’s hard to say anything, definitively, but since we are looking at much bigger COVID-19 case numbers today, compared to last year, does that point to the definite existence of some strain, rather than just some other change in the situation?

But for that (to prove that), you need to really sequence a large number of samples, in order to say that it is a prevalent strain.

For everything you can’t have evidence, definitely, as you put it, very rightly, that it may not be the same virus, which was (in circulation) in November, December and that there’s maybe a different virus in circulation.

In a cluster of samples, we have found the UK variant — that’s just a small cluster, just about 22 samples, which were positive. It cannot represent the entire Mumbai.

Believe me, it’s not cost effective to go around doing sampling and sequencing. A sequencing costs anything between Rs 8,000 to Rs 10,000 rupees per sample.

Will you try to understand every single virus, which is infecting the population, what kind it is? It is very labor intensive. Reports take time.

Or are you going to spend that money in treating your patients and ensuring that the quarantine measures are in place, the facilities are kept up and other things?

So, sometimes it’s a ghost chase. We are trying to see something, which you don’t see, and you just go on and on.

That’s not a cost-effective method — of doing genome sequencing of, practically, so many samples, just to arrive at a conclusion.

We are doing cluster sampling, we are sampling the international travelers. Any complicated cases of respiratory illness, we are sequencing. We are getting important clues of what the virus in circulation could be. 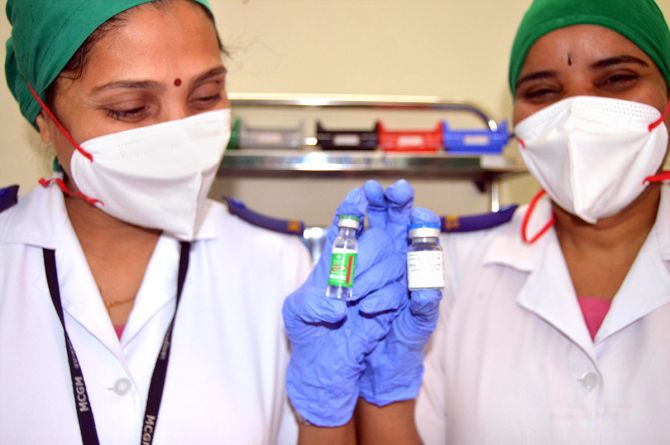 If it seems like it is a variant that’s causing this havoc, what do people need to do?
What does the state government need to do to bend the curve?

I will tell you: The people only need to mask.

That that is a strong message, which needs to come across, because people are just putting the mask below their nose.

They are only protecting the mouth, but not the nose.

People need to understand that it is the nose which has to be protected.

Definitely, your safety is your responsibility. And you’re also responsible for the other citizens and to society.

So, it’s a collective responsibility of citizens to behave appropriately, no?

How much can the government do, you tell me?

We still don’t know how much is the antibody titer ★★ which can be called as protective. When we don’t even know that — we are still groping in the dark. No, no, no. The government doesn’t have to do anything different.

The citizens have to understand one clear message: Safe physical distancing, masking and hand hygiene practices. That is good enough.

A proper mask, which covers your nose, is very, very important. And there has to be a nose clip.

There are a number of wrong masks, there are handkerchiefs, there are masks which are all open from above — these are the things which should be avoided.

People have to be really conscientious and follow the guidelines and the rules, which the government is, you know, shouting out actually. 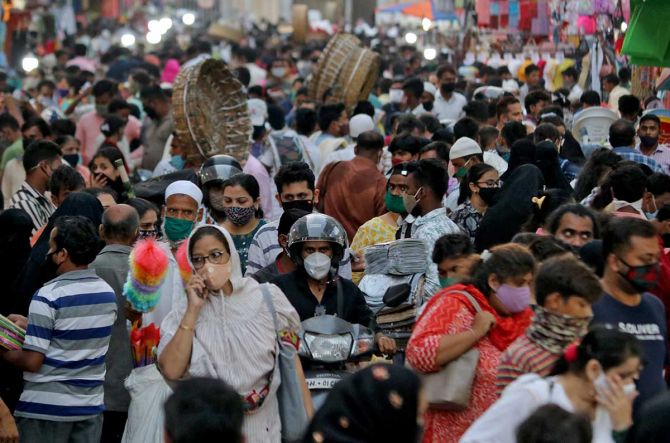 The news from the government about this double mutant is a bit confusing. How exactly does it impact, say an average citizen living in Mumbai?

Those double variants have been isolated in some cases, but not in Bombay,

It is in Amravati (in eastern Maharashtra) and one or two other places — Akola and all.

It is not from Mumbai.

The impact of that is that they are immune escape mutants±

When that happens then even the body’s immune response may not limit the infection by this particular mutant. That has direct implication to the therapy and the vaccination. These are the implications of an immune escape mutant. 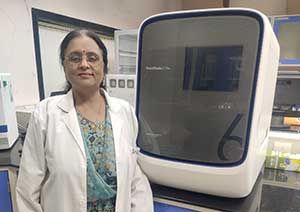 This is about the strains in Amravati. Their existence doesn’t necessarily impact elsewhere yet or at least say someone living in Mumbai?

We haven’t found these strains in Mumbai.

When the government refers to these as double mutants it sounds worrying?

It is two types of mutant viruses in circulation. From a large number of samples, they must have found one mutant and then the other. So, it’s like two mutant strains are in circulation.

The word double doesn’t really imply that much?

Actually, that title is wrong. I don’t like the title.

Yes, it sounds like a double whammy, you know?

It’s like when you get both TB and HIV, we call it a double whammy.

It’s not that both of mutants are present in one patient. Maybe some patients have this, and in others, you have the other mutant.

When Mahatma Gandhi mobilised Rs 6,000 for flood relief in Kerala

Will SRH score a win in their 100th game?