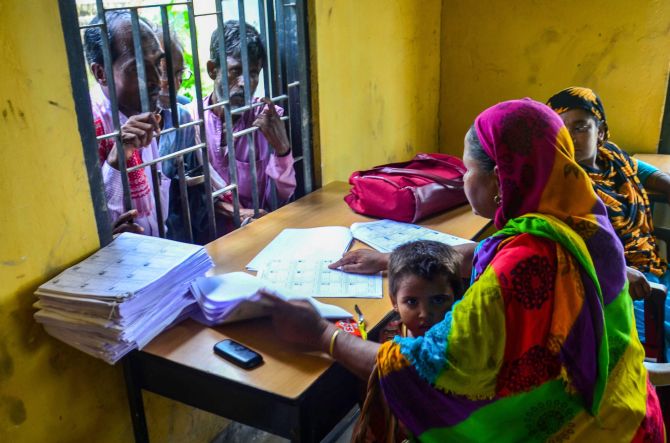 The Centre on Tuesday told the Supreme Court that distinct IDs will be created by collecting biometric details of 40 lakh people filing claims and objections with respect to Assam’s National Register of Citizens.

It said that after the publication of the final list of NRC, those people whose name will figure in it will be given usual Aadhaar number as applicable to legal residents in the country.

A bench of justices Ranjan Gogoi, Navin Sinha and K M Joseph was told by Attorney General K K Venugopal that the Centre has prepared the Standard Operating Procedures (SOPs) as per apex court’s earlier order.

The bench asked them to file the report before the registry and it will be taken up for hearing on August 16.

The government in its affidavit told the apex court that though it had been initially proposed that the process of claims and objections will happen from August 30 to September 28, it would be reasonable to give at least two months time for receiving claims and objections.

It said that during the course of the hearings by NCR authorities on disposing of claims and objections, the state government in collaboration with Unique Identification Authority of India will undertake the process of biometric enrolment of all the applicants of NRC.

“The biometric enrolment in respect of persons who are part of claims and those persons objected upon will be distinctive and separate ID will be generated. Once the final NRC has been published such persons who are included in the NRC will be given the usual Aadhaar number as applicable to legal residents in the country,” the government said.

The government which filed the SOPs to be adopted for disposing of claims and objections with regard to NRC, said that various organisations have made representations that adequate time period at least 3 to 4 months be provided for the purpose of filing the claims and objections.

Giving the timeline based on assumption, it said that Class-1 officers will be deployed by the State government and 5 hearing per day will take place or eight hearings per day for cases of children of 14 years or less.

It further gave the details as what documents will be needed and what not at the stage of filing of claims and objections and at the stage of hearing by NRC authorities.

On July 31, the apex court had made it clear that there will be no coercive action by authorities against over 40 lakh people, whose names do not figure in NRC, observing that it was merely a draft.

It had asked the Centre to formulate modalities and the Standard Operating Procedures (SOPs) including timelines for deciding claims and objections arising out of the publication of the draft NRC.

It had said that the modalities and SOPs prepared by ministry concerned of government of India should be ‘fair and giving reasonable opportunity to everyone’.

Second draft NRC list was published on July 30 in which out of 3.29 crore people, names of 2.89 crore have been included in the draft NRC.

The first draft of the NRC for Assam was published on the intervening night of December 31 and January 1 according to the top court’s direction. Names of 1.9 crore people out of the 3.29 crore applicants were incorporated.

Assam, which had faced influx of people from Bangladesh since the early 20th century, is the only state having an NRC, which was first prepared in 1951.

The top court, which is monitoring the NRC work, had earlier said that the claims of those citizens, whose names do not figure in the draft NRC for Assam published by December 31 last year, would be scrutinised and included in the subsequent list, if found genuine.

Launching a fresh tirade against the Centre on the issue of NRC in Assam, West Bengal Chief Minister Mamata Banerjee on Tuesday claimed that those who did not make it to the final draft of the citizens’ register are being sent to detention camps.

She also said those who have been staying in the country for years were ‘branded as infiltrators’ and accused the Bharatiya Janata Party of carrying out the exercise with an eye on Lok Sabha elections.

“Around 1,200 people, including children and women, have been sent to detention camps,” she told reporters at the state secretariat.

Of the 40.07 lakh people who did not find a place in the complete draft that was released on July 30, 25 lakh were Bengali Hindus and 13 lakh Bengali Muslims, she claimed.

Brandishing few voter cards, she claimed the identity proofs belonged to people born between 1962 and 1965.

“Are these people genuine citizens or infiltrators,” she asked.

Banerjee said she was fortunate enough to have been born in West Bengal, else ‘I, too, would have been dubbed as an infiltrator’.

“They (the BJP) are carrying out the NRC process with an eye on the elections. Sometimes they also raise the bogey of Indo-Pak or Indo-China conflict,” she said.

The BJP is looking at a presidential form of government but ‘they will lose everywhere’, she claimed.

“If everything is fine in Assam, as claimed by the government there, why were 400 companies of central forces deployed in the state? Are media persons allowed to move freely in Assam,” she asked.

Shah had stated at a public rally on Saturday that Banerjee was opposing NRC in Assam because she wanted to indulge in ‘vote-bank politics’ by wooing the infiltrators.

He had called upon the people of the state to uproot the TMC government as it ‘patronised infiltration from Bangladesh’.

Govt. to consider including COVID-19 treatment under Aarogyasri: KCR

Toddler ‘beaten to death’ for crying

Imtiaz Ali on his new project: ‘Filmmaking is a product of passion’