Germany, like other countries that have managed the pandemic fairly well, was quick to deploy widespread testing, effective contact tracing and tests with rapid results. Crucially, that has helped keep the rate of community transmission low. 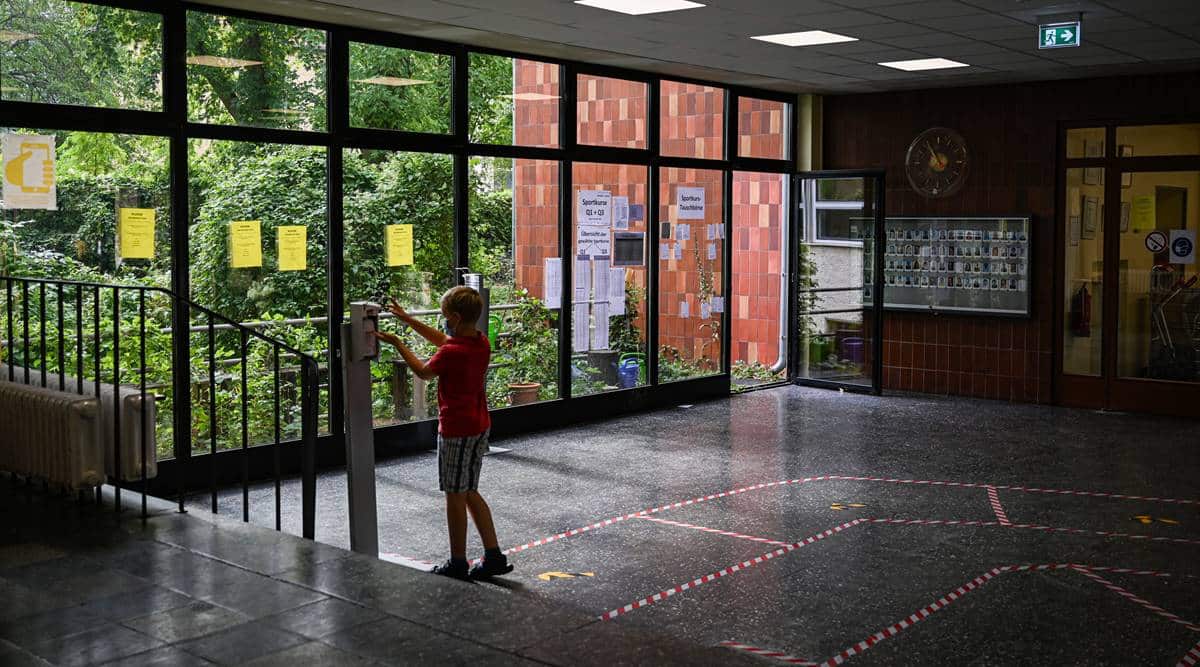 On the Monday after summer vacation, Dirk Kwee was as nervous as he had ever been in 31 years of teaching. For the first time since the pandemic hit, all 900 students at his Berlin school were back, bursting with excitement.

The dreaded call came just two days later: A girl in sixth grade had the coronavirus. Kwee hurried over to the gym where the other 31 students in her class were enjoying their first physical education session in five months. They were sent home — immediately.

On Thursday, the whole class got tested. On Friday, all the tests came back negative. And on Monday, half the children were back in class. But just as Kwee allowed himself a sigh of relief, a seventh grader tested positive.

That may be what returning to school looks like for the foreseeable future.

Germany, like other countries that have managed the pandemic fairly well, was quick to deploy widespread testing, effective contact tracing and tests with rapid results. Crucially, that has helped keep the rate of community transmission low.

So far, the lesson from Germany, Denmark and Norway, among the first countries to start the new school year, is that schools can reopen and remain open — if they build on that kind of foundation. But most countries, and most parts of the United States, simply can’t match those conditions.

As Americans anxiously debate how to reopen schools, and more campuses cancel in-person lessons, Europe is a living laboratory. Despite a sharp increase in coronavirus cases in recent weeks, even countries that were badly hit last spring, like Italy, Spain, Britain and France, are determined to return to regular classes this fall. 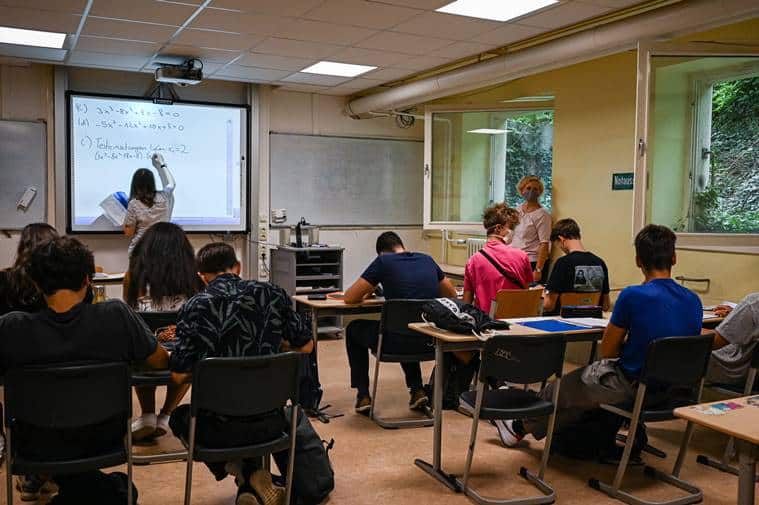 Germany, which was far less affected at the peak of the pandemic, shuttered schools early on, then moved to a hybrid model of remote and in-classroom learning. Class sizes were smaller, and strict social-distancing rules helped keep infection numbers in check.

But now a new experiment is underway: Teachers and students have been summoned back to classes, testing whether the new vigilance is enough.

Social distancing and face masks are mandatory on most school grounds, but rarely inside classrooms, despite recent advice from the World Health Organization that children 12 and over wear masks when distancing is impossible. If students had to wear masks for several hours a day, the argument in Germany goes, their ability to learn would suffer.

Instead, schools aim to better ventilate classrooms and keep classes separate so that each student has contact with only a few dozen others, and outbreaks can be contained.

Germany’s departure from the more cautious, part-time reopening strategy is rooted partly in resource constraints: Like most countries, it has too few teachers to split students into smaller classes and allow for social distancing.

But several weeks into returning to school, educators and even virologists who were skeptical about reopening say that early results look hopeful. Despite individual infections popping up in dozens of schools, there have been no serious outbreaks — and no lasting closures.

Berlin is a case in point: By the end of last week, 49 infections had been recorded among teachers and students across the city. But thanks to fast testing and targeted quarantines, no more than 600 students out of some 366,000 have had to stay home on any given day. Of 803 schools, only 39 have been affected.

“It’s messy and imperfect and I would have liked to see more precautions, but the main takeaway so far is: It’s working,” said Sandra Ciesek, a virologist at the University Hospital of Frankfurt who signed a statement by leading German virologists supporting the reopenings.

“Every school that stays open is worth a lot,” said Ciesek, whose own daughter started first grade this month.

In the United States, some policymakers have focused on the rate of positive coronavirus tests among the general population, with some saying it must be below 3% to safely reopen. The figure is under 1% in Germany, as it is in a handful of other nations and in New York state.

But most places have far higher positive rates — 7% for the entire United States, 8% in Spain and more than 40% in some Latin American countries.

Among the largest U.S. school systems, only New York City’s plans to reopen next month — and even there, students will alternate in-person and online classes. Masks will be required, and Mayor Bill de Blasio has said the schools will stay closed if the positive test rate reaches 3%.

Mass testing has been crucial for countries like Germany, which has led on many fronts in the pandemic, keeping the number of deaths relatively low.

Hospital and care home staff are tested regularly, people returning from vacation in “hot spots” can get free tests and a positive result is generally followed by quick contact tracing. Now that regular classes have resumed, teachers are also offered free tests, even if they have no symptoms.

Such practices, though imperfect, have helped reassure teachers, some of whom were reluctant to return.

At the Heinz-Berggruen school in Berlin, the system proved effective in preventing a wider outbreak. The infected sixth grader had no symptoms but was tested because someone in her family had tested positive. That relative was tested after tracing the contacts of someone else, who had brought the virus home from vacation.

The morning after the girl’s parents notified the school, a mobile testing unit from the local health authority arrived at the school and tested and interviewed all the children and teachers who had been near her. After every test came back negative, half the class was allowed to return to school. Those who had sat near the girl were told to quarantine at home for 14 days.

Other European countries have taken notice.

In Italy, the government is making more than 2 million tests available to teachers before the school year begins in September. The president of the Lazio region, Nicola Zingaretti, recently joined teachers being tested in Rome. “Safe schools means testing, and we have started,” he said.

“This is how you shut down infection chains and prevent outbreaks,” said Ciesek, the German virologist. But she cautioned: “It only works if community transmission rates in society overall are manageable.”

For now that is still the case, officials say, but infections have been rising again across Europe. Germany is averaging more than 1,300 new cases daily, up from about 300 in early July, but far below the peak of more than 5,500 in April.

Europe as a whole is averaging over 23,000 new cases a day, more than double the number in early July, driven primarily by an enormous resurgence in Spain. The United States has averaged more than 42,000 a day over the past week.

As infections rise, so do concerns about schools becoming hot spots.

The teachers’ unions in the Madrid region have called for a strike to protest the lack of safety measures in place ahead of the start of the new school year. The Canary Islands government has postponed the end of the summer break by two weeks to have more time to prepare.

In Italy, some headmasters threatened to shift to online classes if the local government did not provide extra classrooms, desks and teaching staff before the first day of school on Sept. 14.

Some German teachers point to Israel, where infections at a Jerusalem high school quickly mushroomed into the largest outbreak in a single school in the country, ultimately infecting hundreds of students, teachers and relatives.

“Israel scares me,” said Doreen Siebernik, president of the Berlin branch of the GEW, Germany’s largest teachers’ union. “We’re undertaking this huge experiment in schools. But many colleagues don’t want to be part of that experiment.”

Some parents, too, are uneasy.

“There will be schools where it will work, and others that will shut down,” said Stephan Wassmuth, head of Germany’s parent association. “It will become a gamble. But education shouldn’t be a gamble.”

Stefanie Hubig, education minister of the southwestern state of Rhineland-Palatinate and the president of a group representing all 16 state education ministers, said the most effective way to protect schools has to do with the behavior of parents, teachers and students outside the classroom.

“The goal has to be that schools remain open,” Hubig added. “We are learning every day. We need to be creative.”

That creativity is on full display in different corners of Europe.

In Italy, some students returning to school might be directed to classrooms in local cinemas, church halls or even tents set up in school parking lots, venues co-opted to ensure that a 1-meter distance is maintained.

Norway’s government is using a traffic-light color code to indicate the level of danger from the virus, with each color attached to a set of guidelines for schools.

In England, the government has asked schools to consider staggering schedules to give students space as they come and go, a practice gaining ground in Germany, where teachers and administrators are still working to find the best practices to keep fully reopened schools safe.

Kwee, the headmaster at the Heinz-Berggruen school in Berlin, received guidelines from the local government only three days before classes started. When the first coronavirus case was discovered, no contingency plans had been drawn up, let alone an email to parents with instructions on how to respond to an infection.

Clara Felsenberg, 11, was in the gym with her classmates when Kwee abruptly sent them home.

“I was really disappointed,” she recalled. “We had only been back in class for a couple of days.”

The children filed into changing rooms one by one to get dressed and call home. Soon a WhatsApp group among the parents lit up with anxiety and confusion. Would the whole family have to quarantine? When and where would they get tested?

Clara and others took the bus home, which was against protocol, but the parents said they had not been told.

“It’s work in progress,” Kwee said. But he noted one unexpected outcome of the crisis: “I have students come up to me and thanking me for a lesson,” he said. “That never ever used to happen.”

All member posts vacant, National Commission for Women only has chairperson

Cinema poll: Were the cuts to 'Sarkar' post certification necessary?