Rebel YSR Congress MP K Raghu Ramakrishna Raju, who was arrested by Andhra Police under sedition charges for alleged hate speeches against certain communities, had moved the top court seeking bail and terming the case against him a result of “political vendetta”. 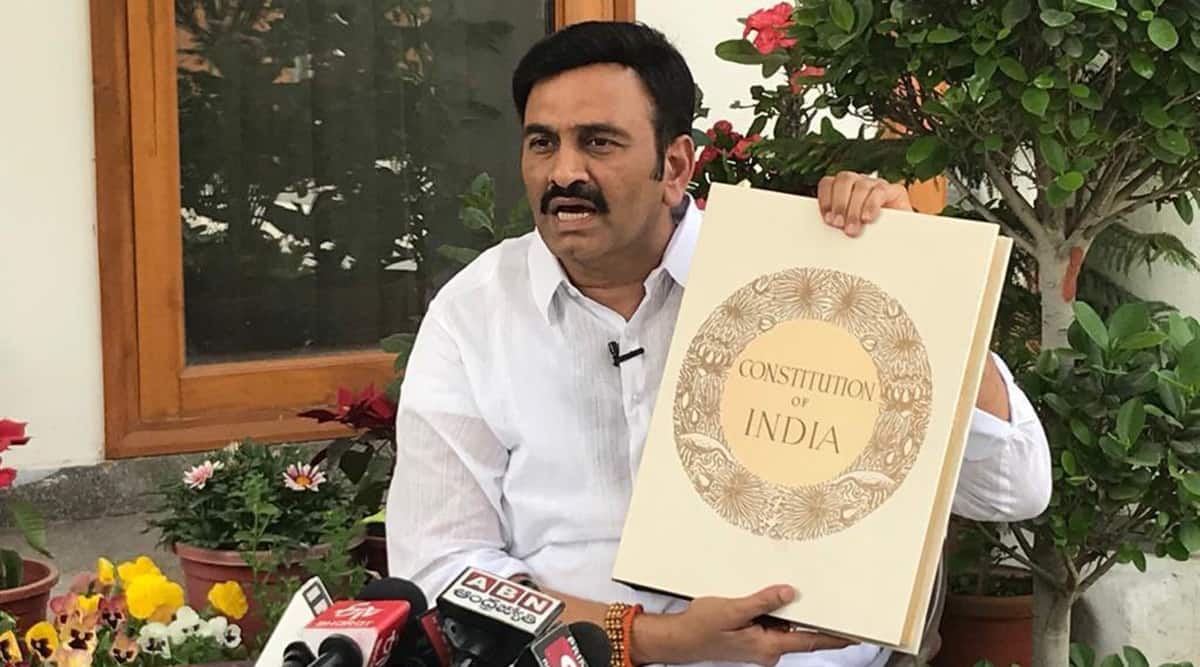 Raju, who was arrested by the Andhra Pradesh Police on May 14 under sedition charges for alleged hate speeches against certain communities, had moved the top court seeking bail and terming the case against him a result of “political vendetta”. He had also claimed that he was “beaten mercilessly” by the state CID, which arrested him, while in custody.

A vacation bench of Justices Vineet Saran and B R Gavai, while referring to Raju’s medical report received from the Army hospital at Secunderabad, said it cannot be ruled out that the MP was “ill-treated” in custody. The apex court further imposed several bail conditions on Raju, including that he would not give any interview to the media with regard to the case.

On May 17, the top court had ordered forthwith transfer of Raju to the Army hospital at Secunderabad in neighbouring Telangana for medical examination and hospitalization till further orders.

The rebel YSRCP MP from Narasapuram— known to be critical of his party president and Andhra Pradesh Chief Minister Y S Jagan Mohan Reddy— had challenged the May 15 order of the Andhra Pradesh High Court, asking him to approach the sessions court for bail.

Following his arrest, the statement from the CID said: “MP from Narasapur Raghu Rama Krishna Raju has been arrested at his residence at Hyderabad. There was information against Raju, stating that he has been indulging in hate speeches against certain communities and promoting disaffection against the government.”

“A preliminary enquiry has been ordered by ADG CID PV Sunil Kumar IPS. It was found that through his speeches Raju was indulging in a systematic, schematic effort to cause tensions among the communities and by attacking various government dignitaries in a way which will cause loss of faith in the government which they represent. There is hate speech against communities and social groups also, which was used to foment social and public order disturbances in conspiracy with a few media channels,” it further read.

On the orders of the CID ADG, a case was registered against the MP under Sections 124A (sedition), 153A (promoting enmity between different groups), 505 (statements conducing public mischief) read with 120B (conspiracy) of the Indian Penal Code.

The arrest came after Raju filed a petition in the Special Court for CBI cases in Hyderabad seeking cancellation of bail granted to CM Jagan Mohan Reddy in a quid pro case. Recently, the CBI court had issued notices to CM Jagan Reddy and the CBI asking them to file their responses to the petition filed by the MP, who sought the cancellation of CM Jagan Reddy’s bail on the ground of alleged violation of bail conditions.

Meanwhile, in his petition before the Supreme Court, the Lok Sabha MP said the state government had asked the DIG, CID, Amaravathi, to conduct an inquiry into his “actions in addressing the print and electronic media accusing failure of the chief minister and his government in dealing with Covid-related issues”.

He further contended that the high court “had failed to notice that the FIR is lodged by the State, which had an axe to grind against the petitioner, as he is critical of the functioning of the chief minister and his government and the case is nothing, but political vendetta…”

Raju’s son K Bharat had also moved a plea in the Supreme Court against the high court order constituting a medical board headed by the superintendent of Government General Hospital, Guntur to check his medical condition following allegations of torture in custody.

The Andhra Pradesh High Court while setting up the Medical Board had rejected the prayer to allow the family doctor’s presence during the medical examination. It also turned down the request to allow his security guards — Raju has Y Category security — with him. In the court, the state denied allegations that Raju was tortured in custody.

Pilgrims from Gujarat stranded in Tamil Nadu, go back home

Ahead of Friends: The Reunion, here are the 10 best Friends episodes for you to binge on

Sundeep Kishan says: Unfortunate for them to lose