Two major regional parties, BJD (ruling in Odisha) and AAP (Delhi), broke ranks with the Opposition to facilitate the ruling NDA candidate’s victory despite their fierce political battles with the BJP in their own turf.

THE much-anticipated election for the post of Deputy Chairman of Rajya Sabha turned out to be an easy victory for the ruling NDA which showcased its new partner JD(U) and tapped its leader Nitish Kumar’s formidable goodwill across the political divide.

Two major regional parties, BJD (ruling in Odisha) and AAP (Delhi), broke ranks with the Opposition to facilitate the ruling NDA candidate’s victory despite their fierce political battles with the BJP in their own turf. Even NDA constituent Shiv Sena, which had abstained from voting with the BJP during the no-trust vote just days ago, joined the BJP to help Nitish’s candidate Harivansh Narayan Singh win the election Thursday.

“BJD has decided to support JD(U) since the JD(U) and BJD have similar ideological origins, emerging from the Jai Prakash Narayan movement,” was how the BJD justified its decision to support Singh. AAP, too, justified its decision to distance itself from the Opposition by citing the phone call it received from JD(U) chief Nitish Kumar. AAP abstained from voting while Shiv Sena voted for the BJP-backed candidate.

That Nitish secured these parties for the NDA underlines JD(U)’s utility for the BJP and is a significant straw in the political wind in the run-up to the 2019 elections when the Opposition’s principal strategy is built around the idea of a united front.

In fact, today’s voting pattern puts a question mark on that strategy. While JD(U)’s Harivansh, backed by the NDA, got 125 votes, Opposition candidate B K Hariprasad of the Congress got 101.

The two YSRCP MPs abstained. The key players were the fence sitters — BJD, TRS and YSRCP — and all eyes were also on AAP, Shiv Sena and the PDP. Sixteen members were not present.

In the end, these parties directly or indirectly helped the NDA much to the chagrin of the Congress. All of them could play key roles in government formation post-2019 if no one party gets a majority. 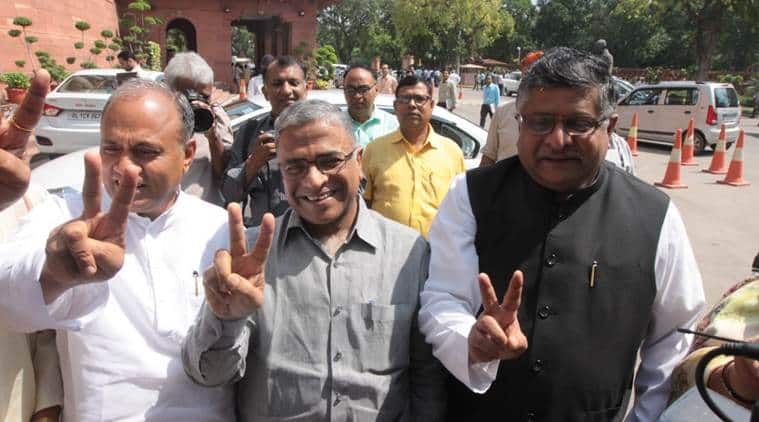 The BJD, significantly, has taken sharp turns in a span of 20 days. It abstained from voting on the no-confidence motion in Lok Sabha on July 20, appeared on the same page as the BJP on the National Register for Citizens (NRC) issue and, crucially, backed the NDA candidate today.

By fielding JD(U)’s Singh, the BJP also signalled to restive NDA constituents and potential allies that it would like to take everyone along. Besides, a JD(U) candidate gave fence-sitters the elbow room to make a decisive choice. For, the BJD or the TRS may not have warmed up to the idea of voting for a BJP candidate.

Sources in some of these parties said they would have been in a dilemma had the Opposition fielded NCP’s Vandana Chavan or DMK’s Tiruchi Siva.

The BJD, for instance, cited “similar ideological origins” with the JD(U) to justify its decision. It said both the BJD and the JD(U) had emerged from the JP movement. The Assembly election in Odisha is scheduled along with Lok Sabha polls and conventional wisdom was that the BJD could not have sided with the BJP.

But it did exactly that suggesting that it could also show this flexibility at the Centre. Bihar Chief Minister Nitish Kumar had dialed his Odisha counterpart and BJD supremo Naveen Patnaik for support.

The YSRCP had, over a month ago, declared it would vote against the BJP in the elections. Y S Jagan Mohan Reddy’s party had been keeping its distance from the Opposition in Parliament even while attacking the NDA over the issue of special category status to Andhra Pradesh.

Sources said the party had a change of heart after state rival TDP openly sided with the Congress and attended the meeting of the Opposition parties. It did not want to be on the same side as the TDP while maintaining distance from the BJP which it has been blaming for the plight of Andhra Pradesh.

It, therefore, decided to abstain but like the BJD signaled it can be flexible at the national level depending on the situation and what suits its interest.

The AAP, a hardcore critic of the BJP, had been warming up to the Opposition. One of its MPs even attended a meeting held to decide the Opposition candidate. But it did a volte-face Tuesday declaring it would support the Congress if Rahul Gandhi requested Arvind Kejriwal for his party’s support. Almost simultaneously, Nitish Kumar reached out to Kejriwal and the result was that the party kept away from voting.

Its three members were not present in the House. Hariprasad said the Congress did reach out to AAP but attributed its stance to “Delhi politics.”

The BJP’s decision to field a JD(U) candidate also seems to have helped it wean away the fence-sitters. While the PDP, whose government in J&K collapsed after the BJP pulled out, stayed away from voting, Shiv Sena backed the NDA. In fact, Sena MP Sanjay Raut was one of those who proposed Harivansh’s name.

So the BJP played the right cards and worked overtime to secure numbers reaching out to parties directly and also getting Nitish Kumar to use his clout and goodwill. The Opposition floundered and frittered the opportunity it had to embarrass the government.

Congress leaders would not come out against the NCP but many of them said the decision not to allow Chavan to be the candidate was inexplicable.

Casuarina ‘bio-shields’ to come up in more parts of Kerala

‘Policemen asked us to keep door of bedroom open and sleep’