On Monday, both leaders addressed public meetings in Telangana. Gandhi targeted the Telangana Rashtra Samithi (TRS) and All India Majlis-e-Ittehadul Muslimeen (AIMIM), accusing them of being hand-in-glove with the BJP. “TRS is the ‘B’ team of BJP. KCR is the rubber stamp of Modi. KCR is Khao commission Rao. Owaisi and his AIMIM are ‘C’ team of BJP and its role is to split anti-BJP and anti-TRS votes,’’ Rahul said. Modi, on the other hand, called for replacing the dynastic rule in Telangana and vote for the BJP for a strong and democratic government, and also took on Telangana Chief Minister K Chandrashekar Rao for his decision on reservations based on religion.

Rajasthan will go to polls on December 7, the results of which would be declared on December 11.

“Five years ago, newspaper headlines used to state corruption scams including coal scams, 2G scam or the submarine scam,” says Modi. He questions people if thye have witnessed any such scams in the past five years.

“The four generations of this family who do not have an udnestanding of land and farmers, made policies that destroyed the farmers instead,” says Modi.

Kartarpur went to Pak due to Congress’ lack of vision: PM Modi

Modi lives, struggles for you: Modi in Hanumangarh

Speaking over the state of affairs in Rajasthan Modi questions the lack of water in the state. “He (Modi) lives for you, he’s awake for you, he struggle for you, he bends before you,” ays Modi.

All scams and corruption came to a halt, all becasue of people’s vote, says Modi. “My vote has the strength that save the country from corruption.”

Kartarpur corridor would not have built, if you would have voted for some other party: Modi Hanumangarh

Modi speaks about the six women navy officers who completed circumnavigation this year on the vent of Navy Day.

Modi begins to address in Hanumangarh

Raje scheduled to canvass in districts of Rajasthan

From its manifesto to public rallies, social media and posters, the Congress underscores public security and the rising crime rate in Alwar, but steers clear of mob violence fearing a Hindu backlash. Not far from Delhi, where senior party leaders routinely target the BJP state government on mob violence, is Behror — ground zero of cow vigilantism in Rajasthan and where Pehlu Khan was lynched by cow vigilantes in 2017.

Revanth Reddy, Congress’ working president in Telangana and Kodangal candidate for the upcoming elections, was taken into preventive custody early Tuesday morning. Reddy, the incumbent MLA, had threatened to stop Chief Minister K Chandrasekhar Rao’s rally in the constituency today. Karnataka minister and Congress leader D K Shivakumar described the move as “intimidation” by the Telangana Police and appealed to the Election Commission to take action. 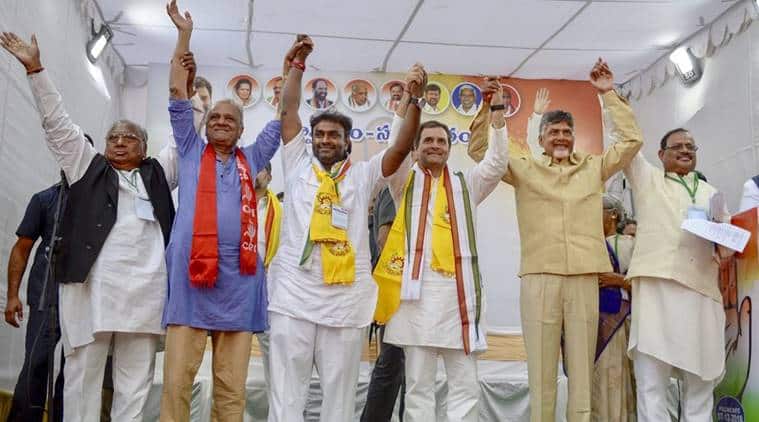 Modi invoked the first prime minister Jawahar Lal Nehru while talking about the agrarian distress in the country on Monday.

Without naming Nehru, Modi said a leader wore a rose and had knowledge of gardening but did not know about farming, which he held as the reason behind farmers’ distress. “He (Nehru) used to wear rose and had the knowledge of gardens but did not know about farmers or farming, due to which the community faced hardship,” PM Modi was quoted as saying by PTI.

On Monday Congress president hit at Modi accusing the prime minister and ruling BJP of posing a threat to the country, claiming that they “spread hatred and anger”.

Centre gives in-principle approval for tunnel under the Brahmaputra amid tension with China: Report

Over 7,500 complaints from passengers till October this year over bad quality food: Railways

‘The Sinner’ Season 3 Gets a Premiere Date & Trailer (Video)