PM Modi urged states to work in unity and coordinate with one another to fulfil medical requirements, asserting that "if we work as one nation, there will not be any scarcity of resources". 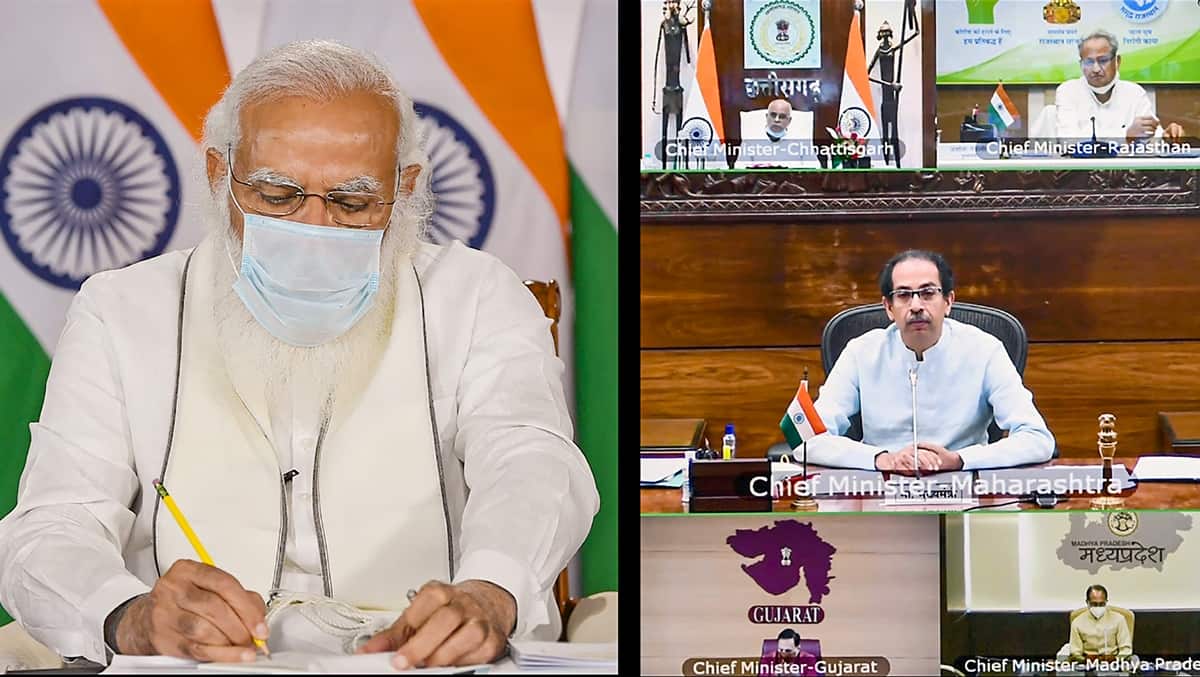 As several states face a shortage of medical oxygen, Prime Minister Narendra Modi said the Centre is deploying railways and Air Force to reduce the transportation time for oxygen tankers, adding that every state should ensure that no oxygen tanker, irrespective of its destination, is stopped or gets stranded.

PM Modi urged states to work in unity and coordinate with one another to fulfil medical requirements, asserting that “if we work as one nation, there will not be any scarcity of resources”.

This was Modi’s third meeting with chief ministers in the last five weeks, with the previous meetings taking place on April 8 and March 17. It was also his fourth review meeting over oxygen scenario in the country in the last one week.

Hospitals in many states and in national capital Delhi have complained of scarcity of medical oxygen and have urged the government to take urgent measures to increase the production and supply of the life-saving gas.

He also called for making people continuously aware so that they do not indulge in panic buying. He said that with united efforts, they will together be able to stop this second wave of the pandemic across the country.

With some opposition-ruled states criticising the Centre’s recently announced vaccination policy as discriminatory against states, Modi said that the Union government has already provided them more than 15 crore doses free of cost.

Noting that the virus is affecting several states as well as tier 2 and tier 3 cities at once, the prime minister called for working together to fight the pandemic with collective power.

He said the biggest reason for India’s success during the first wave of the pandemic was its united efforts and strategy and reiterated that the Centre and states will have to address this challenge in the same way.

Taking note of the points raised by chief ministers on the issue of oxygen supply, Modi said there is a continuous effort to boost it and all related departments and ministries are also working together. Industrial oxygen has also been diverted to meet immediate requirements, he noted.

He said each state should ensure that no oxygen tanker, irrespective of which state it is headed for, is stopped or gets stranded, and urged chief ministers to set up a high-level coordination committee to carry oxygen to different hospitals of the state.

This coordination committee should ensure that as soon as there is an allotment of oxygen from the Centre, it can deliver oxygen as per requirement in different hospitals of the state immediately, he said.

Asserting that the Centre is working on all possible options to reduce the travel and turnaround time of oxygen tankers, he said the railways has started Oxygen Express while empty oxygen tankers are also being transported by the Air Force to reduce one way travel time.

Along with upgrading of resources, states have to focus on testing for the infection, he said, stressing that widespread testing should be conducted so that people get the facility easily.

He also said that the ongoing vaccination programme should not slow down, noting that more than 13 crore vaccine doses have been provided free of cost to the states by his government so far.

The campaign launched by the central government to provide free vaccine to all citizens above 45 years as well as health care and front line workers will also continue, he said.

Noting that the vaccine will be available to all citizens above 18 years of age from May 1, he said they all need to work in mission mode to get more and more people vaccinated.

Expressing grief on recent incidents of oxygen leakage and fire at hospitals, Modi said along with all measures for the treatment of the patients, hospital safety is also very important. The administrative staff of the hospital needs to be made more aware of the safety protocols, he added.

Thirteen Covid-19 patients died in the blaze at the intensive care unit of a private hospital in Virar in Maharashtra, police said on Friday.

At least 22 patients had died on Wednesday due to the interrupted supply of oxygen at a civic hospital for Covid-19 patients in Nashik in Maharashtra following the leakage from an oxygen storage plant.

In the meeting of Modi with chief ministers, a presentation was made by NITI Aayog member V K Paul that highlighted the preparations being made to counter the new surge of infections. Paul also presented the roadmap for increasing the medical facilities and targeted treatment of patients, the statement said.

During the interaction, chief ministers of states, which included Maharashtra, Gujarat, Kerala, Karnataka, Delhi, Madhya Pradesh, Chhattisgarh and Uttar Pradesh, briefed Modi about the steps being taken by them in the current wave.

They said the directions given by the prime minister and the road map presented by NITI Aayog would help them plan their responses in a better way, the statement added.

With a record single-day rise of 3,32,730 new coronavirus infections, India’s total tally of Covid-19 cases climbed to 1,62,63,695, while active cases crossed the 24-lakh mark, according to the Union Health Ministry data updated on Friday.

RIL once again overtakes TCS to become the most valued firm

We will meet all obligations: Quess to East Bengal

Explained: What are the big, black oil-emanating tarballs seen on Mumbai’s beaches?