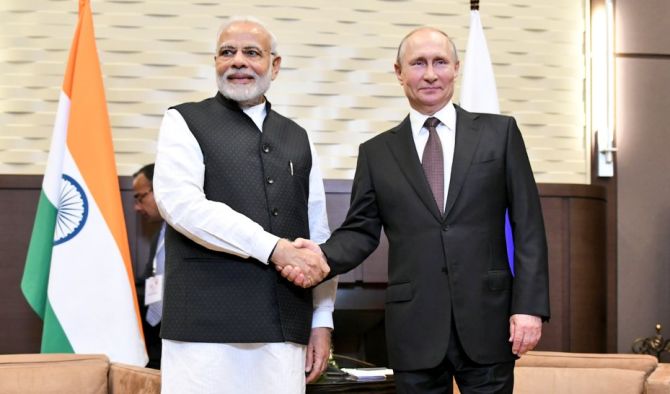 Russian President Vladimir Putin will arrive in New Delhi on Thursday on a two-day visit during which India and Russia are likely to sign a deal to procure S-400 air defence systems and deliberate on key regional and global issues, including United States sanctions on import of Iranian crude oil.

Putin, along with Prime Minister Narendra Modi, will hold the 19th India-Russia annual bilateral summit during which the two leaders are expected to review bilateral defence cooperation in the wake of the US sanctions against Russian defence majors.

The focus during the visit will be on the S-400 Triumf air defence missile systems agreement with a top Kremlin aide saying on Tuesday that Russian President Putin will oversee the signing of the ‘$5 billion (Rs 35,000 crore) deal’.

“The key feature of this visit will be the signing of the agreement to deliver S-400 air defence systems,” Putin’s top foreign policy aide Yury Ushakov was quoted in media reports as saying in Moscow.

“The value of the contract will be more than $5 billion,” he said.

The purchase will violate sanctions under the Countering America’s Adversaries Through Sanctions Act (CAATSA) instituted by the US Congress on arms purchases from Russia, but American lawmakers have allowed the possibility of a presidential waiver.

There have been indications by New Delhi that it will go ahead with the deal notwithstanding the US sanctions.

“India has maintained its sovereignty as regards to its relationship with countries. We shall maintain it in all earnestness,” Defence Minister Nirmala Sitharaman told PTI recently when asked whether the US sanctions will hit India’s defence ties with Russia.

China was the first foreign buyer to seal a government-to-government deal with Russia in 2014 to procure the lethal missile system and Moscow has already started delivery of an undisclosed number of the S-400 missile systems to Beijing.

The S-400 is an upgraded version of the S-300 systems. The missile system, manufactured by Almaz-Antey, has been in service in Russia since 2007. Russia has been one of India’s key suppliers of arms and ammunition.

Sources had earlier said Modi and Putin would also deliberate on impact of US sanctions on import of crude oil from Iran.

The Russian president will arrive here on Thursday and will meet Prime Minister Modi in the evening.

Modi and Putin will hold the India-Russia summit on Friday after which agreements will be exchanged and the two leaders will make press statements, according to the Ministry of External Affairs.

Besides holding talks with Modi, the Russian leader will also have a meeting with President Ram Nath Kovind on Friday, according to MEA.

He will also have an interaction with a group of talented children and address an India-Russia business meet.

The last annual summit was held on June 1, 2017, during the visit of the prime minister to Russia.

In May, Modi had travelled to Russian coastal city of Sochi for an informal summit with Putin during which they discussed a range of crucial issues.

Modi and Putin are also expected to explore ways to further deepen cooperation between the two countries in a number of sectors including trade, investment, connectivity, energy, space and tourism.

Plea in Supreme Court against changes to amended SC/ST law

Pauly D Claps Back At Aubrey O’Day’s Claims He Tortured Her: People ‘Can See Right Through Her’