Kuljeet Chahal said he picked up nine items “driven by emotion” for Modi and for Maa Vindhyavasini Vindhyachal, a Hindu pilgrimage site in Uttar Pradesh. 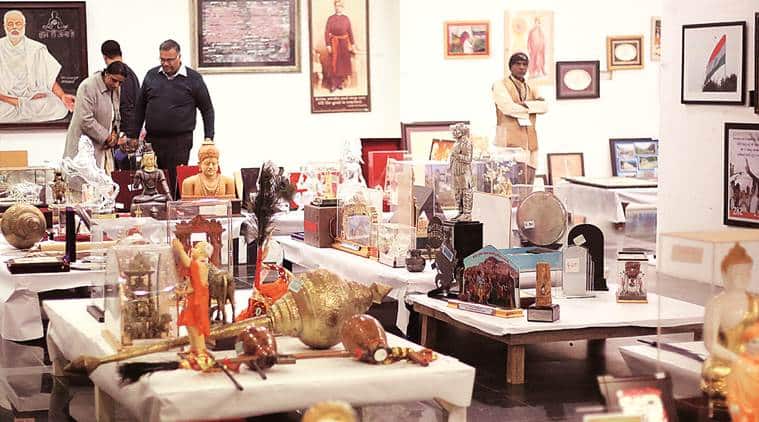 He bought six items in the first hour, three of those had Prime Minister Narendra Modi’s face on it. Kuljeet Chahal, the general secretary of the Delhi unit of the BJP, sat in his crisp kurta-pajama and often flicked his paddle upwards ever since bids opened Sunday for the two-day live auction at the National Gallery of Modern Art (NGMA).

The bids were always higher for Modi. They also perceptibly shot up in the presence of Union Culture Minister Mahesh Sharma who walked in just after 4 pm. In the next hour, two items were sold for Rs 5 lakh each amid applause and a free hug offered to the winning bidder from Sharma. As the bids crossed Rs 1 lakh, at times, there were shouts of “How is the Josh?” which even the auctioneer participated in.

Chahal said he picked up nine items “driven by emotion” for Modi and for Maa Vindhyavasini Vindhyachal, a Hindu pilgrimage site in Uttar Pradesh. “I only bought nine items but I came for emotion’s sake, this is all for a good cause,” he told The Indian Express.

The cause is for the river Ganga and the Namami Gange project, where the proceeds of the auction will go. Under the hammer are 1,800 gifts received by the PM, which were on display at the NGMA since October 2018. The physical auction will be followed by an e-auction which will continue till January 31. But before Sharma arrived, two men who were eager to purchase some of the bigger items – like swords, paintings, and sculptures — argued with NGMA organisers in the lobby for deliberately hiding away expensive items. Manender Jain, who works in a private company, said that the organisers had announced that the “high-value items” will be reserved for the e-auction that will stretch for the rest of the week. “They are showing us slides of useless photographs and small messages to the PM,” he said. “I bought a sword yesterday and today there is not a single item worth buying.”

This was to change within the hour after Sharma dropped by the auction. A select group of people, including Chahal disappeared for a quick brainstorming session, after which a new powerpoint was offered with some of the larger items. Among them was a wooden bike with a starting price of Rs.40,000, Chahal bid Rs.60,000, and the winning bidder offered Rs.5 lakh.

Fifteen items later, a bidder with a paddle numbering 176 won the bid on one of the coveted items: a painting of Modi casually walking down a railway platform. It sold for Rs 5 lakh, and the winner did not wish to offer his name. “It is all for a good cause,” he said when asked, as he smiled and shook hands with Chahal on his way out.

Jain and his friend Pravin Jain stayed outside the NGMA after the auction. “How are we to know we even purchased these from an auction of gifts given to the Prime Minister? There is nothing written down to suggest that” one told the other. “All I got was a certificate of participation.”

Govt for resuming talks only after farm unions agree to offer