Reuters said Siddiqui had been embedded as a journalist earlier this week with Afghan Special Forces based out of Kandahar and “had been reporting on fighting between Afghan commandos and Taliban fighters”. Danish Siddiqui, a Pulitzer Prize-winning Indian photojournalist for news agency Reuters, was killed Friday while covering clashes between Afghan security forces and the Taliban in the Spin Boldak district of Kandahar province, near Afghanistan’s border with Pakistan.

Siddiqui, 38, is survived by his wife Rike and two children.

As tributes poured in for the photographer who captured some of the most riveting moments of major news events in India, South Asia and beyond over the last few years – those who condoled his death included Afghanistan President Ashraf Ghani, Information & Broadcasting Minister Anurag Thakur, Chief Ministers Mamata Banerjee and Pinarayi Vijayan – Foreign Secretary Harsh Vardhan Shringla, speaking at the UN Security Council in New York, condemned the killing of Siddiqui while on a reporting assignment and extended condolences to his family.

Official sources said: “Our embassy in Kabul is in touch with Afghan authorities to bring back the mortal remains of Danish Siddiqui. We have been informed that the body has been handed over by the Taliban to the ICRC. We are actively facilitating the return of the body in coordination with Afghan authorities and the ICRC. We are in regular touch with his family members.” 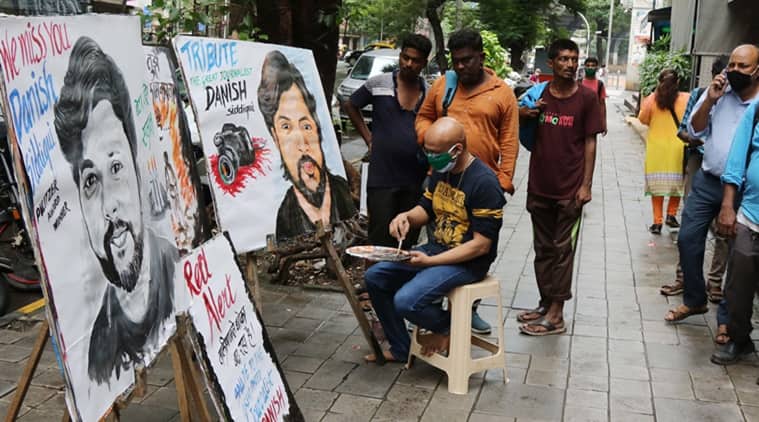 Reuters said Siddiqui had been embedded as a journalist earlier this week with Afghan Special Forces based out of Kandahar and “had been reporting on fighting between Afghan commandos and Taliban fighters”.

Earlier Friday, Siddiqui had told Reuters that he had been wounded in the arm by shrapnel but had been treated and that the Taliban fighters had initially retreated from Spin Boldak.

Later, the fighting resumed and Reuters, quoting an Afghan official, said, “Afghan special forces had been fighting to retake the main market area of Spin Boldak when Siddiqui and a senior Afghan officer were killed in what they described as Taliban crossfire.”

Reuters President Michael Freidenberg and Editor-in-Chief Alessandra Galloni, in a statement, said: “We are urgently seeking more information, working with authorities in the region. Danish was an outstanding journalist, a devoted husband and father, and a much-loved colleague. Our thoughts are with his family at this terrible time.”

Testament to his courage and work, Siddiqui’s last account on July 13 is a brave telling of the fighting on the outskirts of Kandahar. He documented an extraction mission of the ASF while the Humvee he was travelling in was under attack. He captured the photograph of a young civilian caught in the middle of the conflict.

In a Twitter post, Siddiqui wrote: “Afghan Special Forces, the elite fighters are on various frontlines across the country. I tagged along with these young men for some missions. Here is what happened in Kandahar today while they were on a rescue mission after spending the whole night on a combat mission. The objective was to extract a wounded policeman trapped by Taliban insurgents on the outskirts of Kandahar city for the last 18 hours. The particular district is contested between the government and the Taliban. I could feel the tension in the air as ASF were expecting an imminent attack from the Taliban. There was sporadic machine gun fire but all hell broke loose as the Humvees reached the extraction point. Rocket propelled grenades (RPG) and other heavy weapons were used by the Taliban against the convoy resulting in the destruction of 3 Humvees.”

“Gunners atop the Humvees swivelled wildly, aiming fire at suspected Taliban fighters who were hard to see. The Humvee in which I was travelling with other special forces was also targeted by at least 3 RPG rounds and other weapons. I was lucky to be safe and capture the visual of one of the rockets hitting the armour plate overhead. The attack continued as Afghan Special Forces retreated after successfully carrying out the extraction. Caught in the middle of this ambush were several Afghans who were trapped while one of them was this boy,” he wrote.

An alumnus of the Jamia Millia Islamia in Delhi, Siddiqui started out as a television reporter. He had been working with Reuters since 2010. He was part of the Reuters photography team that won the 2018 Pulitzer Prize for Feature Photography for documenting the Rohingya refugee crisis.

Siddiqui also covered the war in Iraq, the Nepal earthquake, protests in Hong Kong, the Easter Sunday blasts in Sri Lanka. At home, Siddiqui’s photographs were seminal works, from capturing the Delhi riots to the most recent images highlighting the gravity of the second Covid-19 wave.

In his Reuters profile, Siddiqui said of himself: “While I enjoy covering news stories – from business to politics to sports – what I enjoy most is capturing the human face of a breaking story…I shoot for the common man who wants to see and feel a story from a place where he can’t be present himself.”

Speaking to The Indian Express, his father Mohammad Akhtar Siddiqui said: “I was informed about it (Siddiqui’s death) by Reuters. The Ministry of External Affairs has also informed that they are trying their level best to trace the remains. My appeal would be that they expedite the process and bring him back to us as soon as possible.”

He said he spoke to his son “almost every night” when he was on the field. “The last time I spoke to him was the day before yesterday. He didn’t seem to be unsafe and he seemed very confident about his work,” he said.

Siddiqui grew up in Delhi, in and around Jamia Millia Islamia where his father taught at the Faculty of Education before he retired. An Economics graduate from the JMI, he enrolled for a postgraduate course at the AJK Mass Communication and Research Centre (MCRC) in 2005.

On Friday, teachers and colleagues remembered Siddiqui as one of the best photojournalists of this generation. In a statement, the university said it “deeply mourns the tragic and untimely” death of Siddiqui. Vice-Chancellor Najma Akhtar called it a “big loss to journalism and the Jamia fraternity”.

Siddiqui’s last class at Jamia was on April 26 this year. Sohail Akbar, teacher of photography at MCRC, recalled how he had found time during the Covid second wave for the class. “His conscientiousness and dedication to his work and to MCRC was so much that he took out time at the peak of the coverage to take the class. Our students were very inspired by him. For us, it (his death) is very shocking,” he said.

Kerala yet to address systemic issues such as dowry harassment

Plea to acquire papers of Bhagat Singh’s trial from Pakistan