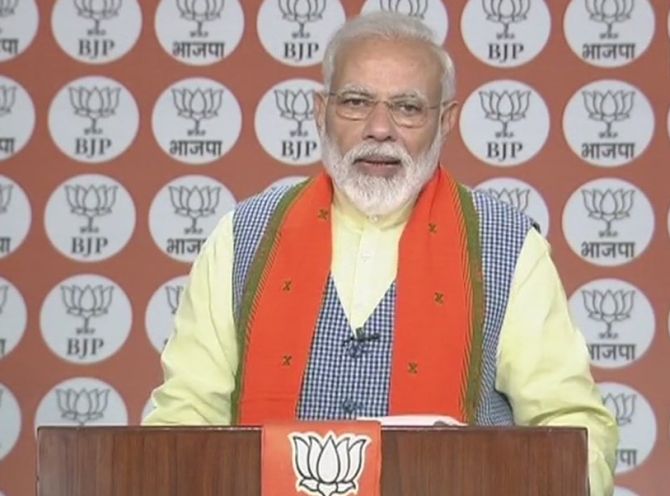 Opposition parties hit out at Prime Minister Narendra Modi on Thursday for his address to Bharatiya Janata Party workers through a mega video-conference amid escalating tension between India and Pakistan.

An Indian Air Force pilot was captured by Pakistan after an air combat on Wednesday during which the two sides said they shot down each other’s warplanes that followed an unsuccessful attempt to target Indian military installations in retaliatory strikes that sparked fears of war.

The prime minister on Thursday had direct dialogue with BJP workers and volunteers as part of the party’s ‘Mera Booth Sabse Mazboot’ programme through, what the party claims, the ‘world’s largest video conference’.

National Conference leader Omar Abdullah said Modi ‘continuing’ with his election campaign either indicates that Wing Commander Abhinandan Varthman will be back home in the next couple of days or that the prime minister ‘does not care enough’.

‘PM Modi continuing with his #Elections2019 campaign is the surest sign #WingCommanderAbhinandan will be back in the next 24-48 hours. Either that or he really just couldn’t care less,’ Abdullah said in a tweet.

Abdullah had on Wednesday called for suspension of all political activities till Wing Commander Varthman returns home.

‘PM Modi must suspend his political activities until #WingCommanderAbhinandan is returned safely. It can’t be business as usual with him cross crossing the country at tax payer expense making political speeches while our pilot is a Pakistani captive,’ Abdullah had said in a tweets after the IAF pilot’s capture by Pakistan was confirmed.

‘At a time when India is facing hostility of war and country needs firm leadership, PM Narendra Modi instead of concentrating on the matters of national security trying to serve political interest by addressing his BJP workers is ridiculous besides betrayal of national sentiments (sic),’ Mayawati wrote on Twitter.

‘Indian forces foiled Pakistani attack yesterday it is a matter of big relief but an IAF pilot is under Pak custody is a matter of great concern. India should try to do its best at all levels to ensure safe return of the pilot only then the country will feel relief (sic),’ she added.

Samajwadi Party president Akhilesh Yadav tweeted, ‘When the entire nation is standing along with the government as an Indian rising above politics, BJP is going to make a record of contact with booth level workers ..even the BJP supporters are ashamed of this.’

‘The situation could be very bad but this suited-booted BJP will continue with its festivities…condemnable,’ he said.

In another tweet, the SP chief said, ‘It has been nearly 24 hrs since our pilot has gone missing.On the other hand 6 brave IAF personnel lost their lives in a helicopter crash. The nation is praying. We’re all waiting with baited breath but not a word from out leadership.The silence is deafening.’