In the new Parliament House, with a soft launch this winter session, paper is expected to disappear.
For the guidance of ministers, secretaries can scribble notes on linked pads even from their offices to respond to queries from members.

The next time a minister is stumped by a tricky question from a member in Parliament’s Question Hour, don’t expect to see a helpful assistant pop up at his elbow with a slip.

“Communication between ministers and secretaries to departments for exchanging notes during the house proceedings” will be taken over by National e-Vidhan Application (NeVA), said a Parliament official.

In the new Parliament House, with a soft launch this winter session (the full functionality will happen in January-February in the Budget Session), paper is expected to disappear.

Each member will instead sit with a terminal on the desk, which will even order food from the house canteen.

For the guidance of ministers, secretaries can scribble notes on linked pads even from their offices to respond to queries from members.

Each of these changes has huge ramifications. The Digital Sansad Programme, the signature part of the NeVA project, is the largest ever revamp of the legislatures across the country.

Some like Tamil Nadu and Odisha have moved in this direction, but the largest demonstration of the move to a digital workplace for the representatives of the people will happen now.

The scale of this change will be reflected by the massive, rebuilt Parliament building.

The triangle shape will swallow up one entire road — Raisina Road — when it throws open its doors.

The even bigger change is expected in the way bodies in Parliament conduct themselves.

No major Parliament anywhere in the world has revamped itself at this scale at one go, said Chakshu Roy, who heads the legislative and civic engagement initiatives at PRS India, the think tank about Parliament procedures. One of the biggest of these changes is the control of what is spoken.

The new Parliament will offer simultaneous interpretation services for every word that is spoken in the 22 languages recognised by the Constitution.

There is a huge challenge here. Presiding officers of both the Lok Sabha and Rajya Sabha will have to decide instantaneously what is to be expunged.

Now, they can take their time to decide if the words are “unparliamentary” and, therefore, need to be struck off the record.

Under the Digital Sansad project, there will be a continual evolving of intelligent Speech-to-Textsystem, “which in near real time can create an accurate transcript of the proceedings of the house using an audio feed of the proceedings”, said a government official.

The machine learning system will cater to diversity among members of Parliament in terms of geographies and accents.

This technology has the potential to make Parliament’s written records harder to sanitise.

At present, members and ministers speak in the respective houses in Hindi or English.

Parliament reporters take notes of speeches and transcripts are sent to MPs for correction and approval.

The system has been in operation for almost a century without change, predating Indian independence. 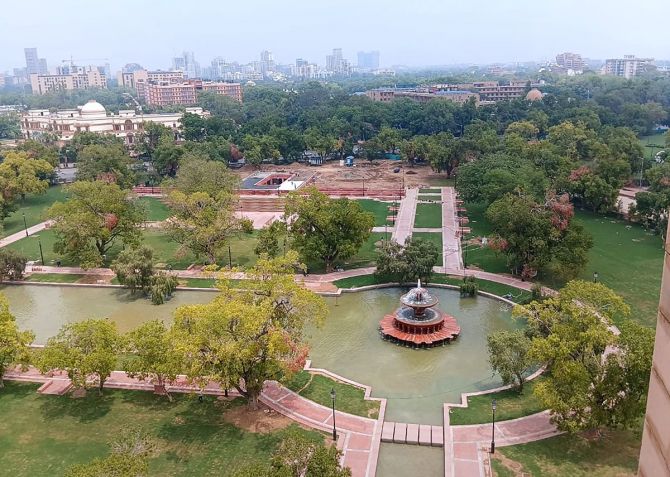 At a touch of the button, this will become history. But authorities who have devised the system say there will still be scope for review.

Shukla spearheaded the development of the e-Sansad and the National e-Vidhan Application till his retirement in 2020.

He said the applications had been developed to function as member-centric, that is remain device-neutral and be user-friendly.

But the records of what is spoken will mimic the controls that have run till now.

The only difference is that each member will have access to the diverse range of house business “elegantly by putting entire information needed by them in their hand held devices/tablets”.

Other officials concur. For instance, because of advanced metadata tagging and AI-enabled search function, each word spoken can and will be automatically indexed and tagged in the audio-video files, a government note says, “for better searchability, and to provide a detailed automated transcript of the audio-video content in multiple regional languages of India…”.

Sansad TV is, meanwhile, developing the capacity to offer caption-like feed on the screen of the MPs for all speeches in the house or in the committees. The Budget is now fully paperless and so is most inter-ministerial communication. But communication with Parliament is loaded with paper.

An estimate by the ministry of parliamentary affairs notes after the Odisha government went paperless in its Budget, it cut down use of “about 1.5 crore pages of paper and saved about 2,000 large trees annually”.

Once implemented across all legislatures it will save Rs 340 crore annually.

But more significantly, despite all the potential information at their command, MPs often do not have a clue about policies and projects.

“The stack of paper sent to their homes, often late in the night, is absurdly huge,” said an officer of the Lok Sabha secretariat. No one can read through all that and be prepared to chase the government for compliance, said Roy.

An officer said: “For instance, as a minister is speaking a member can glance through the relevant records on her tablet on the table and rebut arguments.”

For the citizens too, the changes mean a lot. Everything said in Parliament will be available to each Indian citizen across language barriers.

The natural language-processing engine for translation of the Parliament website is expected to make house debates “open and accessible to every citizen, overcoming the barriers of language”, the government paper notes.

Returnees face arrest if quarantine is violated in Odisha

TASMAC outlets to be equipped with CCTV cameras