Goa has not mandated testing for tourists arriving from other states. Large gatherings at weddings and parties are also being held unrestricted. 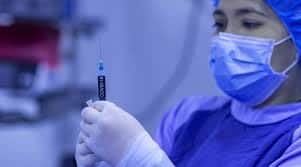 A day after the number of active cases in Goa breached the 2,000-mark, Health Minister Vishwajit Rane said on Monday that “some restrictions” will have to be imposed in the state before the situation “goes out of hand”. On Monday, Goa had 2,180 active cases, with the highest number of infections reported from the urban health centres at Margao and Panaji.

“I feel, personally as the health minister, that the time has come for us to take some steps in terms of some restrictions which will be decided by the Disaster Management Committee as per the guidelines issued by the Centre. As a state, we need to take some steps — some restrictions are required, otherwise this will go out of hand and it will be difficult for us to tackle later,” said Rane.

While curbs were imposed on gatherings ahead of festivals like Holi, the Goa government also cancelled Shigmo parades that were to be held in the first week of April.

Goa has not mandated testing for tourists arriving from other states. Large gatherings at weddings and parties are also being held unrestricted.

While Rane made it clear that there will be no lockdown in the state, he said that a meeting will be held between the Chief Minister and the Disaster Management Committee in the state to decide on the nature of restrictions. An announcement regarding this is expected in the next couple of days, Rane said. He added that at least for the next four months, people need to remain cautious.

“Some restrictions are necessary. We should not be caught on the wrong foot because we did not put restrictions at the right time. Decisions need to be taken to strike a balance between control of Covid and the economy of the state,” said Rane.

Efforts are also underway to increase the intake capacity in hospitals in the state.

Rane said that out of 150 beds, only 15 were left for Covid-19 patients at the Goa Medical College and Hospital. The ESIC Hospital has also been turned into a Covid Care Centre and two floors are being used for the purpose.

Rana said that the Shyama Prasad Mukherjee Stadium in Taleigaon was also being requisitioned for the purpose.

Railways arranges for distribution of food packets in Hubballi