Ansari was ferried in an ambulance guarded by a strong posse of gun-toting security personnel throughout his 900-km journey from Rupnagar to this Uttar Pradesh town in the Bundelkhand region. 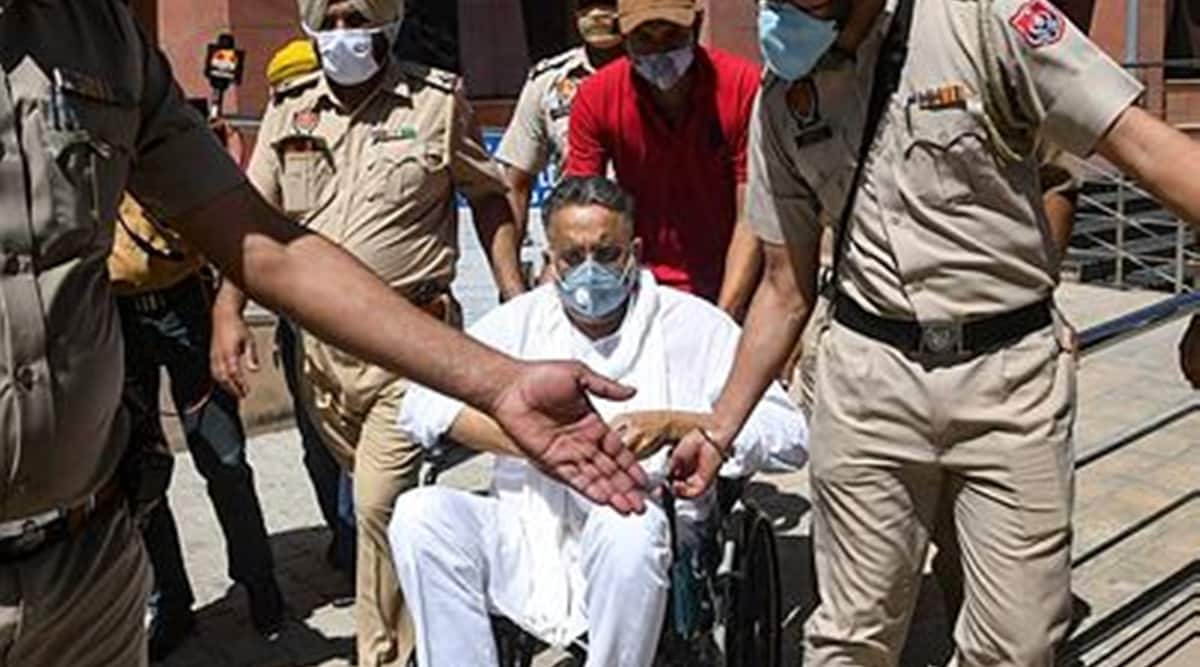 After spending over two years in a Punjab prison, gangster-turned-politician Mukhtar Ansari was brought back to Banda jail early on Wednesday morning.

He was ferried in an ambulance guarded by a strong posse of gun-toting security personnel throughout his 900-km journey from Rupnagar to this Uttar Pradesh town in the Bundelkhand region.

Acting on a Supreme Court order, the Uttar Pradesh Police took custody of the 57-year-old BSP MLA at Rupnagar jail on Tuesday to bring him back to Banda prison. It took around two hours to complete the formalities before he was handed over to the UP Police after a medical check up.

Once the convoy entered the state on Tuesday evening, the fleet of security vehicles of the Uttar Pradesh Police, which included an ambulance equipped with all life-saving equipment to meet any exigency en route to Banda, a journey that takes around 14 hours from Ropar, and an anti-riot police vehicle ‘Vajra’ whizzed past the newly-laid expressways.

Before the convoy entered Banda jail at 4.30 am, it slowed down near Kanpur Dehat as some stray animals blocked the road along a patch of thick forest. Apart from the ambulance, three police vehicles also entered the Banda jail premises.

At 1.30 am, the police convoy in which Mukhtar Ansari was moving, was stopped for sometime in Satti police station area.

As anxious reporters ran to the policemen and sought the reasons for the sudden stoppage from them, no response was given, and the policemen at the spot tried to evade the questions posed by reporters.

Before this, around 1.10 am, the convoy came to a halt on the road between Bhognipur and Ghatampur due to some stray animals.

Initially, the speed of the vehicles was reduced, then the vehicles were stopped, and local police removed the stray animals, following which the convoy resumed its journey.

While heavy security arrangement were made by the Punjab Police outside Rupnagar jail, the Banda prison area looked like a cantonment zone with policemen keeping a hawk-eyed vigil all around.

The Uttar Pradesh team had reached Rupnagar police lines at 4.30 am on Tuesday and left for the jail around noon for the transfer.

The convoy left the jail premises at 2:08 pm taking a side gate, dodging mediapersons waiting outside the main gate. As the convoy took the Ambala road, some media vehicles gave a chase but soon gave up.

The five-time MLA will cool his heels in barrack number 15 of the Banda district jail, where he was lodged in the past before being?shifted to Punjab. Additional police force has been deployed at the jail at the request of prison authorities.

He will be guarded by three security personnel round-the-clock inside the barrack.

“Security personnel have been posted inside as well as outside the jail premises,” Banda jailor Pramod Tiwari said.

“In barrack number 15, where Ansari will be kept, arrangements for light, drinking water and cleanliness have been beefed up,” he?said.

Tiwari said access to the barrack has now been denied to other jail inmates.

The main prison complex gate, which generally remains open, will now be kept closed. Only those jail staff reporting for duty will be?allowed in after proper screening, he added.

High towers have been put up outside the jail and extra police pickets have also been set up to keep a watch on every visitor.

Ansari was lodged in Rupnagar jail in January 2019 in connection with an extortion case.

The legislator from Mau in eastern Uttar Pradesh is facing 52 cases in the state and elsewhere, and 15 of them are in the trial stage.

The apex court had noted that Ansari was allegedly involved in cases of murder, attempt to murder, cheating and conspiracy, apart?from offences under the Gangsters Act.

It said his custody was being denied to the Uttar Pradesh Police on trivial grounds under the guise of medical issues.

The SC also said a convict or an undertrial who disobeys the law of the land cannot oppose his transfer from one prison to another?and the courts cannot be helpless bystanders when the rule of law is being challenged with impunity.

As Uttar Pradesh takes charge of the high-profile undertrial, his wife Afshan Ansari moved the Supreme Court seeking directions to?the state authorities to ensure his safety, including from a police encounter.

A robot for the COVID times

INX Media case: Indrani Mukerjea to appear in Delhi court on May 23

Sacking coach may not bring an end to Barcelona’s woes

18 to 20 months before the economy recovers: Kumar Mangalam Birla at HTLS