It will connect 20 towns around the State capital, State has to pay 50% of land acquisition cost, says Kishan Reddy

Union Minister of State for Home G. Kishan Reddy has announced that the Ministry of Road Transport and Highways has given “in principle approval” for the construction of the 340 km ‘Regional Ring Road’ (RRR) around the twin cities, about 30-50 km away from the existing Outer Ring Road (ORR), to be build at an estimated cost of ₹17,000 crore.

The RRR is to be taken up in two parts, the northern part of 158 km connecting Sangareddy, Narasapur, Toopran, Gajwel, Yadadri, Pragnapur, Bhongir and Choutuppal to be taken up at a tentative cost of ₹7,561 crore. It is to be totally funded by the Centre and another ₹1,961 crore is to be spent for land acquisition or close to ₹10,000 crore will be spent for the first phase, already notified by the Ministry as ‘National Highway 161 AA’.

“We have met Union Minister Nitin Gadkari and sought his help to approve the 182 km second part of the RRR covering southern part connecting Choutuppal, Ibrahimpatnam, Kandukur, Amangal, Chevella, Shankarpally and Sangareddy. He has immediately given his consent for the project expected to cost ₹4,322 crore and ₹1,748 crore for land acquisition,” Mr. Kishan Reddy said at a press conference in New Delhi.

Accompanied by senior leaders National OBC president K. Laxman, D.K.Aruna and others, Mr. Reddy said Mr. Gadkari has assured to complete the RRR “within three years” if the Telangana government completes the land acquisition quickly. “It will be a game changer project for Telangana as the RRR will cover 40% of the population and link 20 towns with the national highways. I request the government to expedite the land acquisition,” he said.

The Minister clarified that while the total land acquisition cost could be around ₹4,000 crore for the RRR, the TS government need to bear 50% of the cost, as the rest would be borne by the Centre. “Once completed the RRR will not only provide a much needed road link for the farmers to sell their produce but will also help small, micro and medium enterprises as well as to set up cold chains, agro-processing units, IT parks, new townships and so on,” he explained.

With the highway traffic heading towards Mumbai, Pune, Nagpur, Bengaluru, Delhi, and others getting diverted onto the RRR, it would help reduce the vehicular congestion in the twin cities and subsequent low level of pollution besides saving time and fuel consumption, he said.

Mr. Reddy also pointed out that the in the last six years under the Modi Government Telangana got 1,918 km of National Highways at an estimated cost of ₹17,617 crore. He thanked Prime Minister Narendra Modi and Mr. Gadkari for clearing the RRR as it could lead to rapid development of the region.

UPA did 3 surgical strikes but didn’t show off: Rahul Gandhi

RTC to send back MP students

Saaho highest grosser with $110K on Opening day in Japan

Top news of the day: Saifuddin Soz claims he is kept under house arrest without formal orders; Jaya Jaitly gets four years in jail in corruption case exposed by Tehelka, and more 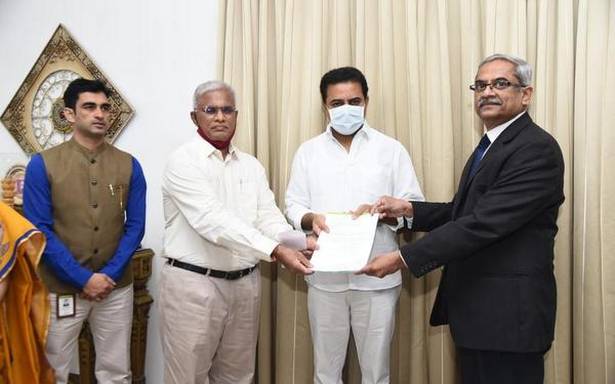