At an election rally in Kushinagar, Modi dared Mayawati to withdraw support from the Congress government in Rajasthan in view of Alwar gangrape if she really cared for women and girls. 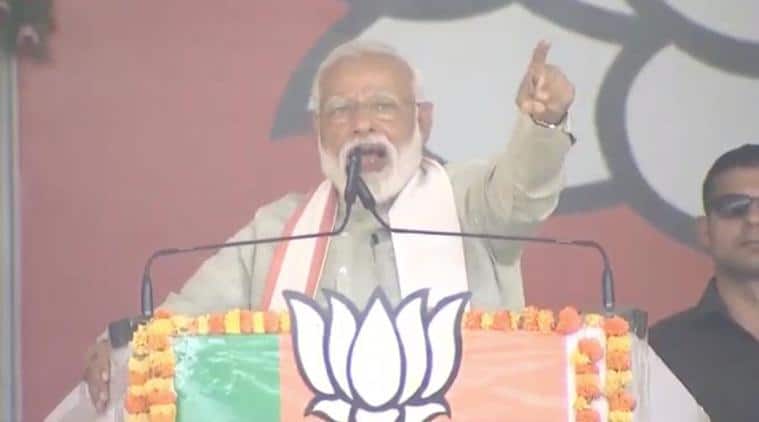 Prime Minister Narendra Modi and BSP chief Mayawati faced off over the Alwar gangrape Sunday. Modi accused Mayawati of shedding “crocodile tears” over the incident, and Mayawati demanded, in response, Modi’s resignation over several instances of atrocities on Dalits during the tenure of his government.

At an election rally in Kushinagar, Modi dared Mayawati to withdraw support from the Congress government in Rajasthan if she really cared for women and girls.

Soon afterward, Mayawati said the PM should not use the Alwar gangrape for his “dirty politics”. She added that the BSP would take a political decision on the matter in case proper legal action was not taken in the Alwar incident.

“What is the reason you do not feel the pain now?” the Prime Minister said.

The “guest house” incident refers to the infamous attack on Mayawati by Samajwadi Party leaders and workers at the State Guest House in Lucknow on June 2, 1995, which turned the two parties into bitter enemies, until earlier this year, when they came together to form, along with Ajit Singh’s RLD, the opposition gathbandhan against the BJP in Uttar Pradesh.

“Rajasthan”, Modi said, “is an example of how the mahamilawat of the SP, BSP, and Congress works. I am surprised that all those who used to talk earlier are silent now. A Dalit daughter was gang-raped in Rajasthan… The Congress government of the naamdaar is in power there. The Rajasthan government is running with the support of the BSP… And the government, which both parties are running together, is busy trying to hide the incident.”

In response, Mayawati issued a statement saying “Shri Modi should not do disgusting politics under the cover of this disgusting incident. Also, in case there is no proper and strict legal action in the case, BSP will definitely take a proper political decision. But why doesn’t PM Modi take moral responsibility for Gujarat’s Una case (in which Dalits were flogged publicly), the Rohith Vemula case (at the University of Hyderabad), and for the everyday atrocities on Dalits in Gujarat and in other BJP-ruled states and resign from his post?”

The BSP, the statement said, knows very well how to deal politically with the Congress party, not just in Rajasthan, but also in Madhya Pradesh and other states — and that everyone would see this when the time comes.

Modi also referred to the killing of two militants in Jammu and Kashmir’s Shopian district in a pre-dawn encounter, and mockingly asked the Congress whether they expected the security forces to seek permission from the Election Commission for their action.

He was a living example of someone who lives only for the poor, Modi said, adding that unlike those who were asking for his caste certificate, he did not made thousands of crores for himself, despite having been the longest serving chief minister of Gujarat, and Prime Minister for five years.

Modi appealed to voters to make this victory so historic that the “mahamilawati” people stop thinking about going against the country.

At a rally in Deoria later, Modi attacked the Congress for “removing the safety net” of the jawans by proposing the removal of the law against sedition. “Congress says that they will remove the safety net, the special law provided to them will be removed. Congress is saying that they will end the sedition law. Congress wants that those who raise slogans of breaking India, abuse Bharat Mata, help Naxals, and throw stones at our jawans have fun, while our jawans struggle in cases in the courts,” he said.

Primary market off to best start in 3 years

M&As to pick up once moratorium ends