‘Mamata has used minorities only as her vote bank.’
‘In her entire election campaign Mamata did not utter a single sentence against the RSS.’

After 34 years at the helm in West Bengal, the Left Front’s downhill journey began when it was reduced to a weak Opposition a decade ago.

This month when the assembly election results were announced, the once-mighty Left found itself decimated.

The Left could not win even a single seat as the Trinamool Congress grabbed 213 seats and the Bharatiya Janata Party upped its score from 3 in 2016 to 77.

In an ill-conceived alliance, the Left Front joined hands with the Congress and the Indian Secular Front headed by Peerzada Abbas Siddiqui and formed the Sanjukta Morcha.

The Left Front is reduced to a mute spectator as Mamata Banerjee’s TMC has not only walked away with its cadre and its assembly seats, but with Didi’s pro-poor welfare schemes is also seen by many as ‘more Left than the Left’.

The Communist Party of India-Marxist, the dominant partner in the Left Front, is today rudderless, unable to keep the sinking ship afloat with a vote share of less than 5 per cent.

Is the CPI-M a spent force? Is the party paying for its past blunders?

Tanmoy Bhattacharya — a former CPI-M MLA and a member of the party’s district secretariat — shares his concerns with Rediff.ComSenior Contributor Payal Singh Mohanka.

Your party would have had time to introspect. You have been quoted as saying, ‘They are discussing a lot but implementing little’. Isn’t course correction the urgent need of the hour?

Discussions are on and there will be an analysis published by the party.

It is too early to say how much will be implemented.

I think we had to work harder to present our stand to the public at the time of the elections.

I think there was a lacuna. Also people had some questions. From 2016 to 2021 there were 4 elections in our state.

Naturally, people raised a question about this partnership and how long it would continue. We have lost credibility.

Yes, it was. The people of Bengal have rejected the Sanjukta Morcha.

We first have to admit this, then discuss the reasons for which the people have rejected us. We have to accept the reality.

It wasn’t clear to the voter whether you were trying to defeat the TMC by splitting the minority vote or if you were contesting the BJP’s agenda.

Both the BJP and Mamata are dependent on competitive communalism in Bengal politics.

The BJP tried to isolate Muslims from mainstream politics, society, from the main objectives of our Constitution and mark them as second class citizens.

Mamata on the other hand has said that ‘I am ready to accept the kicks of the cow that gives me milk.’

Doing nothing for the betterment or development of the minorities, Mamata has used them only as her vote bank. And shows them only she can save them from the BJP’s Hindu communalism.

Why did you tie up with Peerzada Abbas Siddiqui’s ISF?

The ISF is a combination of nine different organisations of backward communities. Among these seven are Hindu and 2 are Muslim.

You went to the polls without a common manifesto or agenda.

This was a lacuna on our part. We failed to prepare a common manifesto though we published a joint appeal from the Sanjukta Morcha to the people. But it was not a manifesto.

You have referred to Mamata Banerjee as ‘the B-team of the RSS’. Could you elaborate?

We correctly think in West Bengal Mamata has worked as the B-team of the RSS (the Rashtriya Swayamsevak Sangh).

The BJP is the present face of the RSS. The organisation running the central government is the RSS.

You can easily understand when in her entire election campaign Mamata did not utter a single sentence against the RSS.

When the Left Front government lost power a decade ago there were only 700 branches of the RSS working.

Now there are 12,000 under the Mamata regime. She says ‘I have no quarrel with the RSS, my opposition is BJP.’ 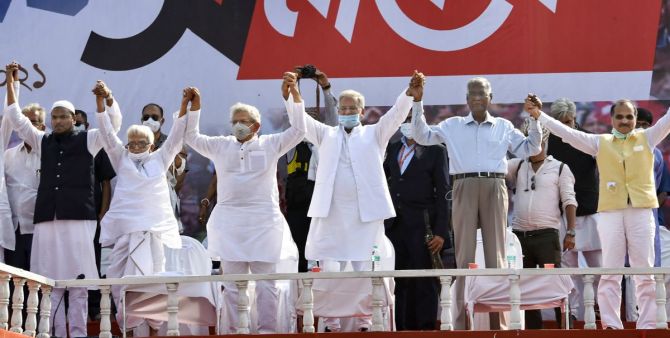 Did the RSS help Didi to win the 2016 election?

Yes, obviously. The RSS has helped Mamata to win the 2016 elections. Uma Bharti herself made a statement to this effect.

Mamata had said the RSS were patriots (deshpremi) and they called her Durga, the main goddess of Bengalis.

Didi has grabbed your cadre, your assembly seats and most importantly with her pro-poor welfare schemes she is seen as ‘more Left than the Left’. How will you combat this?

She is not at all Leftist. She is a very good actor and that is the way the media projects her.

She is a complete reactionary. All the decisions she has taken are in favour of big capitalists, big landlords and the bourgeoisie.

Nothing for the peasants, the working class and the unorganised workers.

Is the Left Front in Bengal paying for its past blunders?

Yes, we are. We have made some mistakes in our 34 years. People wanted Jyoti Basu to become the prime minister after the 1996 Lok Sabha election, but the party decided against it.

This is when the erosion of Left votes in Bengal started.

Gradually corrective steps were taken and we were able to arrest the depletion of our votes.

The Left Front saw its biggest victory in the 2004 Lok Sabha election.

We won 35 parliamentary seats from Bengal and 61 from all over India.

This was a new record for us. We were asked to join the government, but preferred to support it from outside.

Somnath Chatterjee became the Lok Sabha Speaker. But in 2008 we withdrew support from the Manmohan Singh government for a reason that people were not able to understand, the India-US nuclear deal.

Our supporters were not happy. The situation worsened when Somnath Chatterje was expelled by our party. These were mistakes.

Your party withdrawing support from the UPA government is what gave the Trinamool Congress a big boost. The TMC joined hands with the Congress for the 2009 parliamentary election.

Yes. That is true.

You have said ‘If the party thinks it will conduct an election in the same way it did 30 to 40 years ago, it will think the same old thoughts and the only thing young will be the candidates, this will not work.’ How has your party reacted to this?

Is this suggestion meeting a lot of resistance?

Obviously. There are two schools of thought. One school we have inherited, the new school is the result of the present situation.

Science and technology are developing at a very fast pace. A true leader is one who has the ability to foresee.

This capacity is becoming weaker day by day, maybe it has been lost completely.

Globally the ideology of the Left seems to be eroding. Do you think it is a spent force?

No, I think our ideology is the best ideology. And only this ideology can save people from different types of exploitation.

This ideology has been proven in the world and will be proved further.

There may be questions about the implementation. Marx himself said that, ‘Change is the only unchangeable feature of this changing universe.’

An ideology, which is an applied science, has to be applied in different countries according to the problems of that social structure.

The implementation part of Marxism is the most important part. The laboratory is society. We have to first understand our society.

We have had our share of success. When we came to power in West Bengal in 1977 the state’s economic position was such that 61% of the people were below the poverty line.

The priority of the government was to provide food.

That’s why our first task was land reform. In 1978 we started the panchayat. This gave the poorest of the poor people power.

We had a food for work programme. We reshaped the rural economy. We made 5 to 10 ponds in every village of the state and developed fish harvesting.

About 58,000 primary schools were set up in rural areas.

We set up industry under the leadership of Jyoti Basu and Somnath Chatterjee, chairman of the West Bengal Industrial Development Corporation.

A new industrial policy was accepted in the assembly in 1994. Do you know the Mamata government has not produced one further unit of electricity within these ten years?.

Today you seem to be losing touch with ground realities while the Left in Kerala has re-invented itself. Why do you think the party has been so successful there?

They are on the same page. This is the best for parliamentary democracy.

Under the leadership of Chief Minister Pinarayi Vijayan the state has successfully faced floods and Corona.

They have increased health facilities and built oxygen plants and sent oxygen to other states too.

The people of Kerala feel this is their government. This is the reason for the win in Kerala.

How do you see the way forward for the Left in Bengal?

We are facing a huge challenge. Our party’s state committee will decide on the tasks ahead. I think our leadership will find a path.

Kovind made president because of his caste: Gehlot

Top news of the day: Prashant Bhushan refuses to offer an apology in contempt case; there is no vaccine for racism, says Kamala Harris, and more