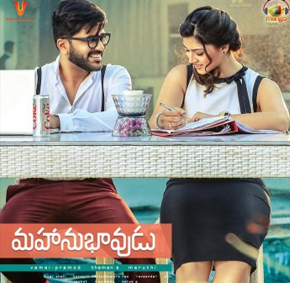 The complete audio of Sharwanand and Mehreen Kaur Pirzada’s Mahanubhavudu  is finally out today. Composed by the talented Thaman, let’s now see how this album turns out to be. Mahanubhavudu is one of the finest albums for Telugu music lovers in the recent times.

This in the  first and the best song on the album. Armaan Mallik crooned this song in his lovely  voice. Krishna Kanth’s lyrics are attractive. This song hits you instantly with its peppy chorus which has been tuned quite superbly. It seems Thaman has changed  his style with respect to this romantic number.   This song will surely be liked by the younger generation as it is filled with some lovely romantic moments.  The sizzling chemistry between the lead pair will make this song even bigger hit once the film releases.

The second song of the album is title number Mahanubhavudave Raa. It is traditional, classical and melodious. This is a song which reminds us of a westernized slokam. The lyrics refer to the protagonist’s Obsessive Compulsive Disorder (OCD) in good measure.   Geetha Madhuri sang the song creating powerful impact with her voice.

The third song Kiss Me Baby which is crooned by Thaman himself has a very interesting set up. The funky song with party mode orchestration is giving full kick, especially to youth. This song is going to be prime choice in parties, events and other rejoicing places. Krishna Kanth’s lyrics are attractive and have been nicely interlaced into this westernized song. The use of electric guiter is nimble. Thaman S and Manisha Eerabathini did full justice to this song.

The fourth song in the album in My Love is Back, which is a very westernized Sufi number, composed by Thaman. Rahul Nambiar gives his heart and soul to this song which catches your imagination right away. The  lyrics penned by Srimani, steals the hearts of the youngsters.  The lyrics are lovely taking lovers and youngsters to another world of love. The tuning and instrumentation are very good.  The lyrics describe so much about life . The young romance is clearly visible in this lovely song which is an instant hit too.

The fifth song in the album is Bhaamalu Bhaamalu which is a fun number. This song  is a feminist’s nightmare and hits you right away with its quirky tune. The teasing song is beautifully crooned by Nakash Aziz and  the song  has some funny  lyrics by Bhasakarabhatla, which describe women and their behavior towards men. Thaman uses the right instruments to evoke the right feelings in the listener. Bhasakarabhatla’s lyrics are enjoyable.

The last song on the album is the romantic yet emotional number Eppudaina which is brilliantly crooned by Shwetha Pandit.  SS Thaman deploys the flute, ghatam and violin among others. What works best for the song are the lyrics by Seetharama Sastry and the singing by Swetha Pandit. The song is filled with a lot of love and hard felt emotions. This song will surely be liked by the younger generation as it is filled with some lovely romantic moments.

Analysis: Overall, Thaman  has once again churned out an album which completely goes with the situations in the film. The album has a perfect blend of family, romantic and youthful numbers which will sound even better after you watch the stunning visuals. The title song, Rendu Kallu, My Love is Back and Eppudaina are our picks. Thaman included good romantic songs to touch the hearts of the youngsters.

Amid standoff with China, IAF to get land in Uttarakhand to carry out activities in border areas

After Pulwama, be tough with Pakistan. Be smart internally with Kashmir

Back from the woods?

All is not lost yet: Rahane