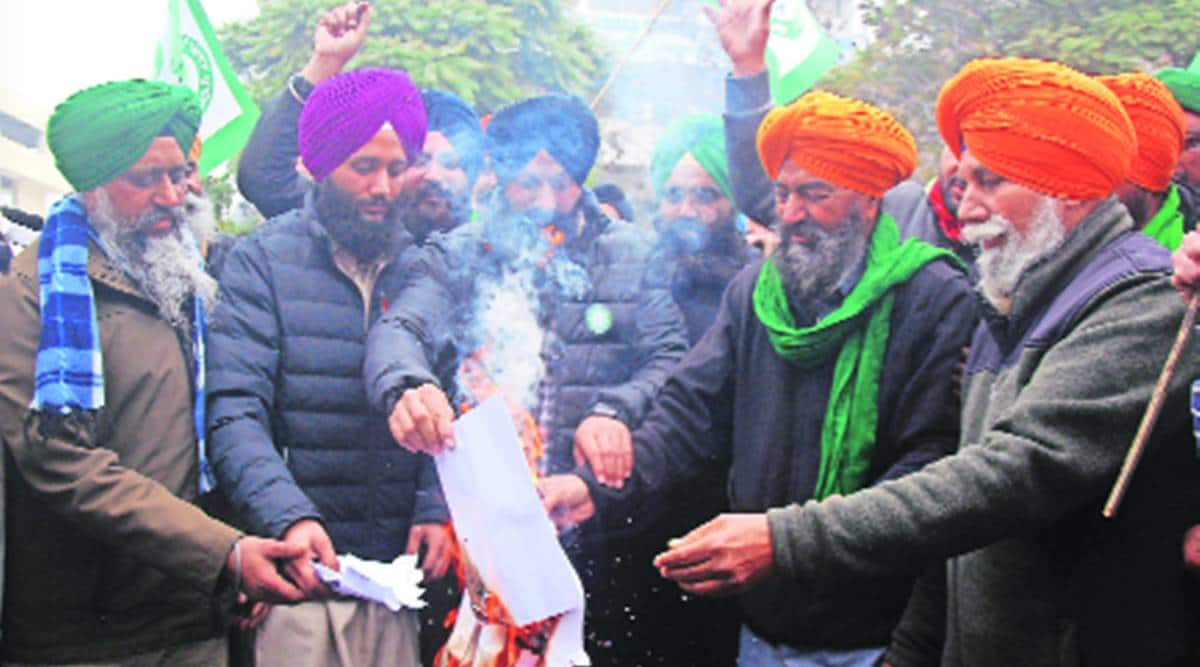 Farm union activists burnt copies of the farm laws across villages and towns in Punjab to mark Lohri in solidarity with the ongoing protests against the Centre.

“Lohri is a festival related with Dulla Bhati. He was a rebel who fought against Akbar after taxes were increased on public. Taking inspiration from Dulla, we will fight against Delhi peacefully to repeal the farm laws. Otherwise Lohri is a festival of happiness. But today we have burnt the copies farm laws in fire of Lohri,” said Sawarn Singh Pandher, general secretary, KMSC. Men, women and children come together in villages for symbolic burning of copies of farm law.

Dal Khalsa and its youth wing Sikh Youth Punjab also burnt 100 copies of the farm laws and stated that nothing short of repeal of these laws was acceptable to the people of Punjab.

The activists shouted slogans against the BJP government. They termed PM Narendra Modi’s government as authoritarian and accused it of “promoting crony-capitalism”.

Activists also staged a spirited protest and slammed the government for its “stubborn attitude”. Commenting over the constitution of four-member panel by the apex court, the leader of the Dal Khalsa Kanwar Pal Singh said, “It’s just a hogwash. When views of members favouring the laws are known, what is the point of setting up of such one-sided panel. Staying of the laws by the SC is neither acceptable nor a solution to the impasse. Government is hell bent to scuttle the farmers’ agitation and it is using the office of the CJI for a judicial trap.”

To a question by the media, he said, in case the government puts the ban on January 26 tractor march to Delhi, the farmers will defy it. He, however, clarified that their march would be peaceful.

He said, “January 26 is black Republic day. We will hold a march on the black day with black flags to protest against black farm laws.”

‘Need to step up sequencing-based surveillance in country’