Till just a week back, Khushbu, who was one of the Congress’s spirited voices on social media, was targeting Prime Minister Narendra Modi. “A Prime Minister who can feed peacocks cannot feed the poor in this country,” she had tweeted six days ago. 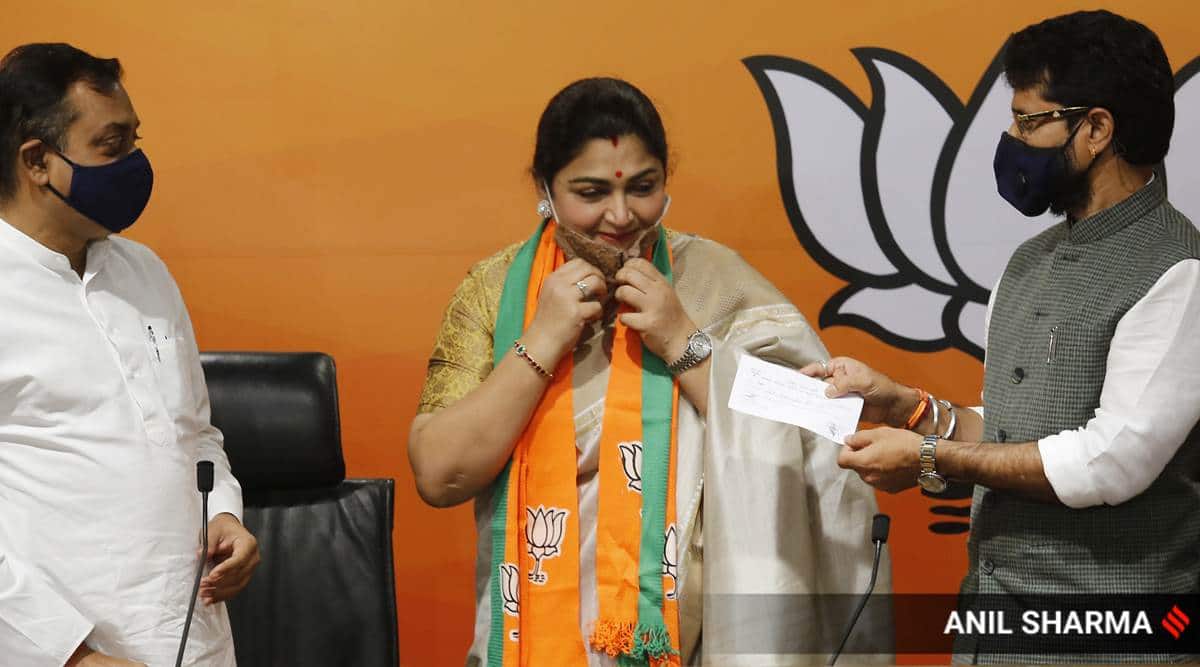 HOURS AFTER she quit the Congress, saying some senior leaders were “dictating terms” and “people like me… are being pushed and suppressed”, actor-turned-politician Khushbu Sundar joined the BJP on Monday.

“A few elements seated at higher level within the party, people who have no connectivity with the ground reality or public recognition are dictating terms, and people like me who wanted to work for the party sincerely are being pushed and suppressed,” Khushbu said in her resignation letter to Congress chief Sonia Gandhi. The Congress then announced her removal as party spokesperson.

Later in the day, after joining the BJP in New Delhi, PTI quoted her as saying: “You have 128 crore people actually believing in one man and that’s our Prime Minister. I think they’re doing something absolutely right.”

Till just a week back, Khushbu, who was one of the Congress’s spirited voices on social media, was targeting Prime Minister Narendra Modi. “A Prime Minister who can feed peacocks cannot feed the poor in this country,” she had tweeted six days ago.

Khushbu, who left the DMK to join the Congress in 2014, had also slammed the BJP government over the Rs 20 lakh crore package announced to tide over the impact of the lockdown. “So finally a package… 10% of GDP. Be ready… we have a long road ahead of steep rise in taxes, taxes and more taxes,” she had tweeted.

Explained | Why did Khushbu join BJP, a party she fought tooth and nail for a decade?

In April 2019, following the Supreme Court’s verdict allowing leaked documents to be relied upon by petitioners seeking review of its Rafale judgement, she said this proved that “chowkidar chor hain”. She had also called the BJP “Bharatiya Jumla Party”.

In 2018, Khushbu, who is married to Tamil filmmaker Sundar C, had briefly changed her Twitter profile to “khushbusundar… and it’s NAKHAT KHAN for the BJP.” She said she had to do this because BJP trolls were claiming that her real name was Nakhat Khan and she was hiding it.

In September 2019, she tweeted: “Sadly, once again I have to edit my profile. Sanghi dumb idiots are so physically retarded that they do not understand simple basics… they are calling me a Muslim who does not have a place in my country, my India. Yes I am a Khan, I am a Muslim and India is my country… Koi shaq?”

But she has been unhappy with the Congress for some time now. In fact, the first indication came in September last year, when actor-turned-politician Urmila Matondkar left the Congress.

“People who have loyally stood by any party tend to get overlooked in favour of political tourists,” AICC media panelist C R Kesavan had tweeted then. And Khushbu responded. “You and I are loyal fools.”

In July this year, she openly backed the New Education Policy unveiled by the BJP government. But even then she tweeted: “Sanghis can relax, pl(ea)s(e) do not rejoice. I am not moving to BJP. My opinion might be different from my party but I am an individual with a thinking mind of my own….”

In July, she also came out in support of Sanjay Jha, who, after he was sacked as Congress spokesperson, said young leaders — like Sachin Pilot or Jyotiraditya Scindia — should have helmed the Congress. Scindia had left the Congress by then.

“Sanjay Jha speaks his mind without fear. And that’s what makes him strong. Not a rebel. Very well spoken. I second what he said about Pilot and Scindia,” Khushbu had tweeted.

In Chennai, State Congress chief K S Alagiri said Khushbu’s exit would not affect the party and “she was just seen as an actress, not a leader”.

But with the Assembly polls due in Tamil Nadu next year, many in the BJP see her entry as an advantage. A senior party leader from Coimbatore said she was the most popular face to have joined the party recently.

Another party leader said state BJP chief L Murugan was instrumental in getting her to switch sides. “Murugan was consistent in pursuing her entry into BJP,” he said. Murugan, who was in Delhi on Monday, wasn’t available for comment.

“Talks were on for several weeks. The BJP approached her some time ago. She never said no, but Delhi leaders didn’t want to give her any promise on posts — neither a Rajya Sabha berth, nor a key post in the national leadership. That is why talks were inconclusive until Friday. At her end, the pressure was building, she was in distress, how long could she fight rumours and questions,” said a senior BJP leader. He said Khushbu may be made national spokeperson, a post she held in the Congress.

BJP insiders said Khushbu was expected to draw the crowds at their poll campaigns. “Maybe the national leadership will send her to campaign in Bihar too,” said a party leader.

A Congress leader and former Union minister said he would not blame Khushbu. “She was tired of the indifference and inactive leadership of the Congress party,” he said.

The Ayodhya mediators: Judge who ‘restored faith in mind of Kashmiris’

Replace AN-32 aircraft, demands father of flight lieutenant who went missing in 2016