A total of 213 cases were reported from across the state in last 24 hours whereas 180 patients recovered from the infection. While the total recoveries are 4,135, as many as 2987 cases are still active in the state (as on June 15). 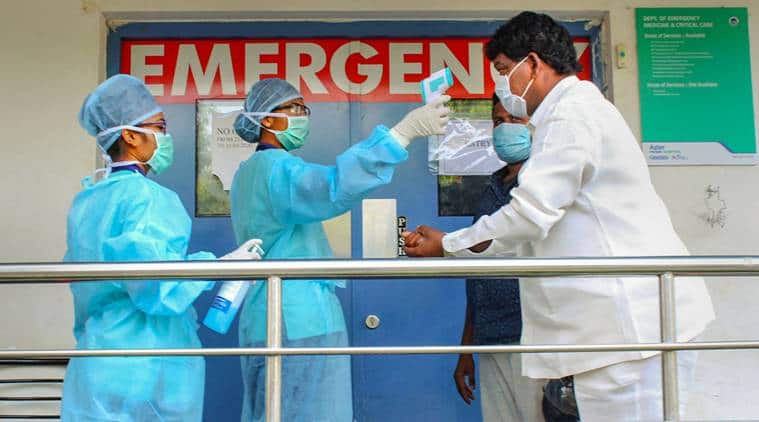 The daily health bulletin released by the Karnataka Department of Health and Family Welfare Services on Monday showed a sudden jump in the number of patients admitted to Intensive Care Units (ICUs) in the designated Covid hospitals across the state. While the number was 16 Sunday, the same rose to 56 on Monday, adding 40 more to the list.

However, when contacted, health officials said it was nothing else than a compilation of numbers. “There is nothing alarming in this and the situation is totally under control in Karnataka. We have compiled the numbers from across hospitals in the state during the weekend which reflected in the bulletin (on Monday),” an official told Indianexpress.com.

Meanwhile, 213 cases were reported from across the state in last 24 hours whereas 180 patients recovered from the infection. While the total recoveries are 4,135, as many as 2987 cases are still active in the state (as on June 15).

A delegation of leaders from the Aam Aadmi Pary (Karnataka) has urged the Karnataka government to call off the SSLC exams, citing possible risk for the teachers and students. In a meeting with Minister for Primary and Secondary Education S Suresh Kumar, the delegation listed out the reasons behind its reservation over conducting the exams.

“Considering that Covid-19 cases are still increasing and we are yet to see the peak, SSLC Exam should be cancelled to avoid exposing students, teachers and their respective families to the virus. An SSLC student belonging to Chikkamagaluru district has been infected by the coronavirus. Two students living in Kalasipalya have also tested positive,” Darshan Jain, Joint Secretary of AAP Karnataka said.

The delegation further pointed out that students and teachers might require to use private buses for their daily commute in districts like Dakshina Kannada, Chamarajanagar, Tumkur, Mandya and Hassan, urging the government to cancel the board exams similar to how some other states have done already. As many as 8,48,192 students have registered for the SSLC examination in Karnataka scheduled to be held from June 25 to July 3.

Days after the Karnataka government announced ban on online classes till Class 5 in schools in the state, some were yet to follow the order, parents pointed out.

“The ministers’ announcements were made public and it was clear that schools cannot hold classes till Class 5. However, students were asked to attend the class today as well, with mandatory attendance being taken,” a parent of a student studying in Vibgyor school told indianexpress.com.

However, when contacted, school authorities said that they were awaiting a government order on the same. “We cannot compromise on the academic schedule as it would affect our students’ performances. If there’s an order, let that be communicated officially to us,” a headmaster of another private school in Bengaluru said.

Shramik Specials ferry over 3.38 lakh migrants from Karnataka to homestates

As many as 233 Shramik Special trains operated by the South Western Railway (SWR) has so far ferried over 3.38 lakh migrants from Karnataka to different parts of north India since May 3.

According to the data shared by SWR, 3,38,837 migrants boarded these trains from Karnataka till Sunday. The latest to operate from the state left Bengaluru for Guwahati with 1,750 passengers on board at 8 pm on Sunday. The train was expected to reach the destination at 6 am on Wednesday.

As many as 35 fresh cases and a fatality were reported from the city between 5 pm on Sunday and 5 pm on Monday, health department statistics said.

Those trying to dilute nationalism active on campuses: Amit Shah

Explained: How did scientists recreate sound of 3000-year-old Egyptian mummy