‘Overnight, with zero qualification whatsoever for the responsibility of prime ministership, Priyanka is being projected as an alternative to Narendra Damodardas Modi!’ says Nazarwala who predicted Mayawati’s win in the 2007 UP elections, forecast her rout in the 2012 polls, and called right the 2017 UP assembly election result. 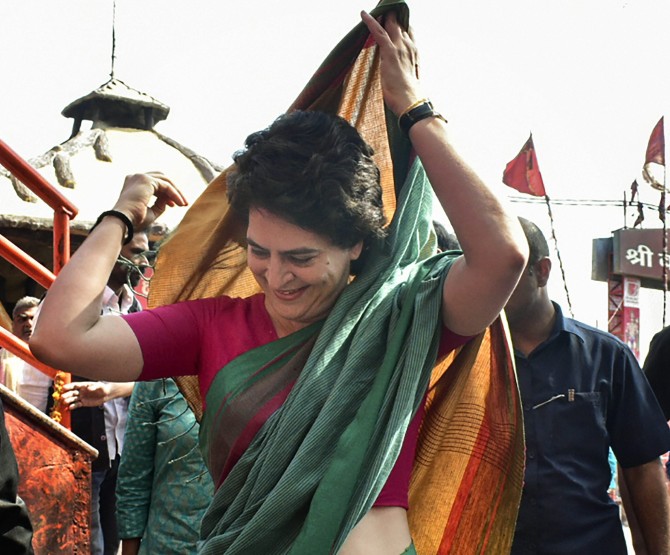 Rahul Gandhi is desperate to revive the Indian National Congress.

He has an indisputable, abnormal, advantage in the form of pedigree — right from his great, great grandfather Motilal Nehru to father Rajiv Gandhi.

This is one well-known family which accounts for three prime ministers of India that is Bharat.

The duration of their combined regime is enough to keep the Guinness Book of Records editors busy in cross-checking the dynasties of other democracies.

The Nehru-Gandhi surname’s magic is unprecedented.

In addition to three prime ministers, the family has also been twice blessed with ‘extra-Constitutional authorities’, with even a foreign-born who acquired the surname proving powerful enough to control India that is Bharat for 10 long, scam-laden, years.

Truly, the surname confers immunity from all charges of corruption and misgovernance. Don’t believe me? Ask Subramanian Swamy who is still struggling to prove the blatant corruption in the National Herald case.

The Nehru-Gandhi surname’s magic does work wonders. So much so that even a nonentity can superciliously humiliate the prime minister of India by publicly tearing to shreds an official document — merely to impress the media.

Now, another Nehru-Gandhi offspring, the charming Priyanka Gandhi-Vadra, has been ceremoniously re-introduced to the nation.

She too has got a double whammy — ‘Nehru’ and ‘Gandhi’ — of surname inheritance.

‘Vadra’ is an embarrassing hangover which she may want the eastern UP-wallahs to overlook.

Priyanka Vadra has an enterprising husband, to say the least.

No doubt, when bureaucrat Ashok Khemka’s facts emerge on the national consciousness, some tears will be shed by her family.

Meanwhile, the Congress sycophants are working overtime to pit her against Ajay Singh Bisht aka Yogi Adityanath in Gorakhpur, while others are propping her up for the big fight of Varanasi, because she has already visited a temple and done Durga darshan there.

The strategists think that her label will fool the voters. She would do well to spurn their advice, or else prepare for another label — April Fool.

Overnight, with zero qualification whatsoever for the responsibility of prime ministership, Priyanka is being projected as an alternative to Narendra Damodardas Modi!

Merely resembling grandmother Indira, and aping her gestures and gimmicks, is no qualification.

At most they may be good for grabbing TV bytes, but certainly not for vote-catching.

The electronic and print media boys are busy planning their coverage, and coining sensational headlines. Nothing more to it. And the sooner the Gandhi trio realises it, the better for them.

Sticking to Amethi to safeguard Rahul’s seat may be a saner option.

I can feel their pain: Dr. Sanduk Ruit

Prevention of torture: Most states silent on bill to punish public servants

Campaign for tiger reserve in Wayanad to be renewed

No EU plot to destabilise the U.K.: Ireland