‘The Indian Navy has sufficient combat power in areas of interest to India that can quickly scale up operations if the need arises.’
‘This includes all the choke points leading into the Indian Ocean as also areas within.’

Admiral Biswajit Dasgupta was commissioned into the Indian Navy in December 1984 and is a product of the National Defence Academy.

He is a specialist in navigation and direction and has commanded frontline ships of the Indian Navy: The Missile Corvettes INS Nishank and the INS Karmuk, the Stealth Frigate INS Tabar and the Aircraft Carrier INS Viraat.

Besides serving as the Naval Assistant to the then Chief of Naval Staff, the admiral has held many operational and training assignments in his 35 year career at sea.

A graduate of the Command and Staff College Bangladesh, the Army War College at MHOW and the National Defence College, Admiral Dasgupta was awarded the coveted Yudh Seva Medal for his role in coordinating the evacuation operations from Yemen in 2015 under Operation Raahat.

Admiral Dasgupta is currently posted as the Chief of Staff of the Eastern Naval Command based at Vishakapatnam.

“We are inducting many cutting edge and disruptive technologies onboard our platforms to equip our personnel adequately for future operations. These will help our personnel operate in the increasingly complex maritime domain with even greater confidence”, Admiral Dasgupta tells Senior Rediff.com Contributor Air Commodore Nitin Sathe (retd) in the second of an exclusive two-part interview. 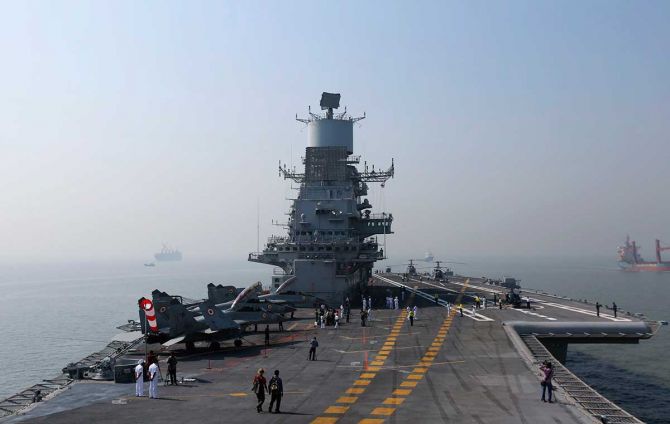 What about the Tejas requirement of the Navy?
I believe you are looking for a twin-engine configuration for safety requirement of flying over sea.
HAL obviously will take time to get you such indigenous aircraft.
Any plans of new acquisitions in the interim?

The LCA (Light Combat Aircraft) Navy project is not being pursued by the Indian Navy as it does not meet our requirements.

ADA Bangalore is developing a twin-engine deck-based fighter in lieu of the LCA MK II, the first flight of which is expected by the middle of this decade or thereabouts.

The Indian Navy is also actively looking at acquiring a multi-role carrier-based fighter in the interim.

We are currently operating the MiG-29K, which has performed quite satisfactorily.

We are inducting many cutting edge and disruptive technologies onboard our platforms to equip our personnel adequately for future operations.

These will help our personnel operate in the increasingly complex maritime domain with even greater confidence.

As part of joint operations, a lot of intelligence gathering has been carried out by naval aeroplanes in the past.
What was their role in the recent stand-off with the Chinese?
There has been talk about deploying the MiG-29K to bolster our air fighting capability up north.

India, like every other nation, employs its forces to undertake operations to safeguard its territorial integrity and sovereignty.

The Indian armed forces have always operated seamlessly, whenever the situation demanded.

The constitution of the CDS (chief of the defence staff) has only bolstered it further and there is no looking back on the future of more effective jointness.

Weapons and sensors, when inducted, undergo rigorous testing in varied terrains and conditions, and therefore, can be deployed across theatres as necessary.

There is no doubt that we will use all our capabilities to best effect to further our national aims.

This is a given in peacetime as well as during heightened tensions in any sector/theatre. 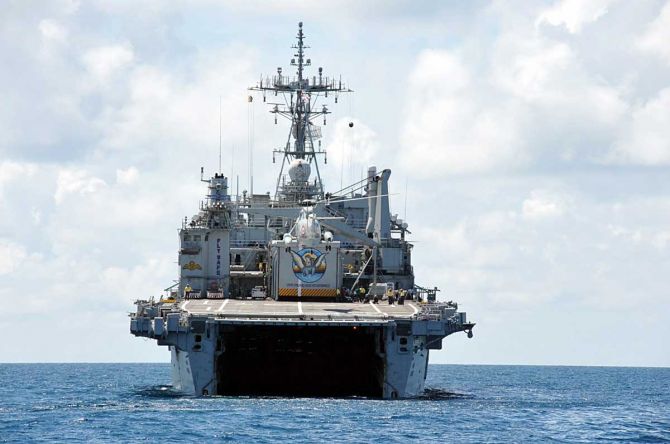 Naval sailors have to stay in close contact with each other whilst on ship mostly due to paucity of space.
How has the navy battled the ongoing pandemic and has it had any effect on the operational efficiency?
Has the navy also helped the civil administration in battling the pandemic through the shore-based units and formations?

The Indian Navy, as you have rightly pointed out, operates in challenging living and operating conditions onboard its ships and submarines.

Close proximity is unavoidable in the constrained confines of ships, submarines and aircraft.

As COVID-19 started unfolding, the Indian Navy put protocols in place to ensure minimum impact on its operational and administrative taskings.

The proof of this is in the fact that we have successfully completed Operation Samudra Setu to evacuate our nationals from many countries in the Indian Ocean Region, whilst concurrently providing relief material to many and continuing with our mission-based deployments.

On the administrative front, we have lent a helping hand to the civil authorities by providing ingenious solutions to address the increasing complexity of COVID-19 by developing and providing both hardware and software.

These have been deployed by the civil administration to enhance their response mechanisms in these trying times.

Our main objective has been to minimise the effect of COVID-19 on our fighting units so that they remain deployable and combat-ready at all times. 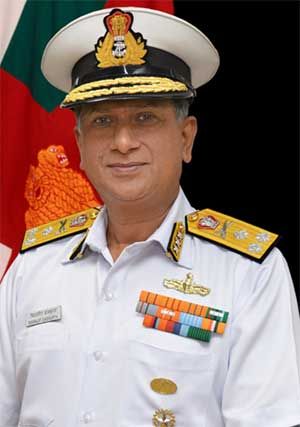 There has been a lot of talk on the requirement to speed up ‘jointmanship’ between the fighting forces.
What has been achieved in this area and what lies in the immediate future?
Will formation of joint command structures help in achieving the same?

The creation, initially, of Headquarters integrated Defence Staff close to two decades ago, helped the Services understand the varied nuances of joint operations and put structures in place to enhance their effectiveness.

The Andaman and Nicobar Command became a Tri-service command in 2001.

Tri-service agencies in a few functional areas are also in place.

The recent creation of the CDS and Department of Military Affairs is aimed at speedy implementation of further jointness and integration.

However, we need to understand that joint operations are complex and whilst putting appropriate structures in place is one aspect, achieving seamless operations is the final objective.

As all operations, since the Kargil War in 1999 have adequately demonstrated, jointmanship is the only way ahead and I am certain the Services will adopt and adapt to it in quick time.

Serious work is underway on the formation of Joint Theatre and Functional Commands.

I am sure the details will be made public as soon as the proposals are finalised and approved by the Government of India.

What is the Indian Navy doing to ease the pressure on our forces involved in the north during the stand-off with the Chinese?
How will the navy do so in future if we have a limited involvement in the north?

The Indian Navy, a few years ago, identified the necessity to be poised for operations rapidly due to the changing paradigm of maritime operations.

This was the foundation for formulation of the navy’s Mission Based Deployment philosophy.

These Mission Based Deployments have ensured that the Indian Navy has sufficient combat power in areas of interest to India that can quickly scale up operations if the need arises.

This includes all the choke points leading into the Indian Ocean as also areas within.

The navy’s nimbleness and flexibility coupled with excellent Maritime Domain Awareness and the ability to deploy in all three dimensions giving us the capability and confidence to influence the IOR in several ways.

There is also tremendous potential for joint operations in the maritime theatre, which we practice regularly.

We are confident of rising to any challenge whether independently or in support of our sister services. 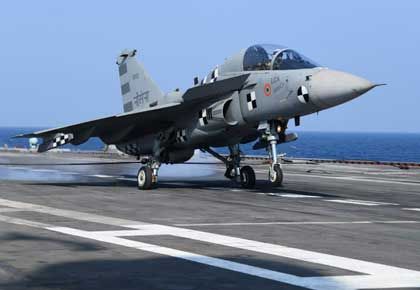 Fact check: Is the government right in denying NPR-NRC link?

COVID-19: Yet another Pune police ASI succumbs to virus as cases mount in district

No free grain in July for 40% of PMGKAY beneficiaries