India's Coronavirus cases numbers: The fatality rate in the second wave, starting February 9, has been significantly lower than not just in the previous wave, but also the overall fatality rate. The rapid rise in coronavirus cases has begun to show its impact on the death numbers as well. The daily death count, which had dropped to double digits in February, has risen to more than 250 the last two days.

However, compared to the sharp increase in cases, the rise in deaths has been quite low as of now. The fatality rate in the ongoing second wave is still significantly lower than what was seen in the peak months of July, August and September last year. But for the last two weeks, it has begun to rise.

On Wednesday, India reported more than 53,000 cases and 251 deaths. The first time that the daily case count had breached the 50,000-figure was on July 29 last year. On that day, 775 deaths were reported. That was because the daily case count at that time had already remained in the 30,000 and 40,000 range for two weeks before hitting the 50,000 mark. This time, the rise in cases has been much more rapid. India has spent only five days in the 40,000s and two days in the 30,000s, before reaching the 50,000 range on Wednesday. It is possible, therefore, for the daily death count to show a sudden rise in the coming two weeks.

The last time India reported more than 50,000 cases was on November 6, and on that day 577 deaths were reported. But by that time, cases had begun to decline steadily, and had remained well below 50,000 for two weeks prior to that date. 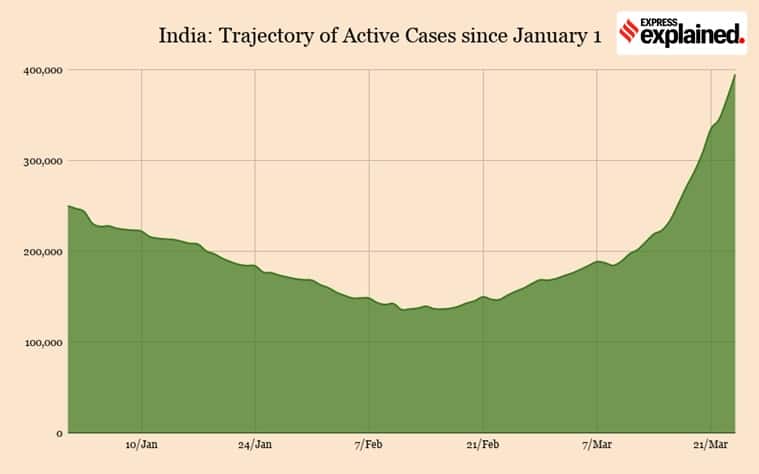 The fatality rate in the second wave, starting February 9, has been significantly lower than not just in the previous wave, but also the overall fatality rate. Since the start of the epidemic, about 14 out of every 1,000 infected persons in the country have died due to the disease. During the second wave, this number has been below ten.

In Maharashtra, which accounts for more than a third of all coronavirus-related deaths in the country, 24 out of every 1,000 infected persons have died. But after February 8, this number has come down to ten. This trend has been visible in almost every other state as well.

In Maharashtra, the CFR had actually dropped in the week between February 21 and February 28, from 0.9 per cent to 0.83 per cent, but climbed back to 0.9 per cent again in the following week.

Till about ten days ago, there used to be between 18 and 20 states on any given day that were not reporting even a single death. These included states like Rajasthan, Gujarat, or Uttar Pradesh on some days. This number has been coming down now. On Tuesday, for example, only ten states reported zero deaths, while on Wednesday 13 states had no deaths. Almost all of these are now smaller states or union territories.

Not surprisingly, more than 62 per cent of all the active cases in the country are in Maharashtra. The state has seen its active cases rise from less than 35,000 in the first week of February to almost 2.5 lakh now. Kerala and Punjab, the next two states with the highest number of active cases, have more than 20,000 each. In contrast, Pune alone has close to 50,000 while Nagpur has 34,000.

The larger picture on GDP numbers